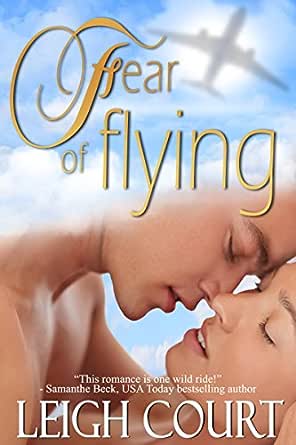 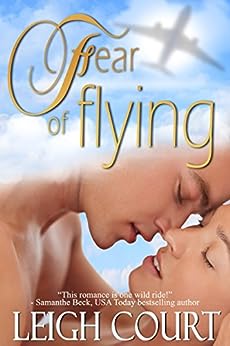 Lorraine M Harris, Author
5.0 out of 5 stars Flying Will Never Be The Same
Reviewed in the United States on October 21, 2016
Verified Purchase
Fear of Flying is funny, fast-paced, romantic and well-written. Although I don't usually read erotica romance novels, Leigh Court did an outstanding job telling the story so that the loving-making scenes were more sensual than graphic. I enjoyed the book and would recommend it to anyone who likes reading heartfelt romance novels. The characters are likable with the right amount of tension between them. I look forward to reading other works written by Leigh Court.
Read more
One person found this helpful
Helpful
Report abuse

Earthkids Publishing (Consignment)
5.0 out of 5 stars Appetizing guilty pleasure...for sure!
Reviewed in the United States on January 10, 2015
Verified Purchase
I love Leigh Court's other books and stories and always find her an appetizing guilty pleasure. How would you cure a fear of flying? Leigh cooks up a tantalizing romance between a book publicist and a difficult author that both rings true and yet captures the heat of passion we've come to expect of her. My only suggestion is that she never mention that other book again, the one with the Grey in it. Her books are far better written, with real characters and no cardboard or cartoons anywhere. I can't wait for my next guilty pleasure from Leigh Court's hot little pen.
Read more
One person found this helpful
Helpful
Report abuse

anonymous
5.0 out of 5 stars I'm Booking the Exit Row From Now On!
Reviewed in the United States on January 28, 2015
Verified Purchase
I’ve gotten to the point where I will happily read ANYTHING Leigh Court writes...she speaks to my heart as a woman and as someone who likes to really feel a book.
I am in the PR Business and have never, ever had a client experience like Jessie’s. Oh My! But, one can only hope, I am not retired yet.

The characters are fun, the plot is sexy, and the book is a wonderful read for a boring business trip. I will never again view sitting in the Exit Row the same way.

F. Filloramo
5.0 out of 5 stars A great quick read!
Reviewed in the United States on July 20, 2016
Verified Purchase
What a wonderful romance ! The novel is filled with plenty of passion, woven into a patchwork of a believable storyline. Leigh Court's writing style captures and sustains your interest throughout this romantic novel. Read it!
Read more
One person found this helpful
Helpful
Report abuse

Alice G. Brilmayer
5.0 out of 5 stars Sizzling hot!
Reviewed in the United States on January 4, 2015
Verified Purchase
This novella is a delight. Two engaging characters and plenty of heat. The hero is to die for, and the heroine is worthy of him. This story will keep you warm on a cold winter evening.
Read more
One person found this helpful
Helpful
Report abuse

K. Pasha
5.0 out of 5 stars I need a Regan of my own!
Reviewed in the United States on March 25, 2019
Jessie Jordan doesn’t believe in psychics, but has a hard time ignoring the one who seems to know her worst fear. As a book publicist for a New York publisher, her jobs requires her to fly all over the country with authors on a regular basis. She loves her job except for one small problem.

Jessie also isn’t too fond of her newest assignment, eco-travel writer Regan Quade. He’s charming and sexy as sin, but drives Jessie crazy with his arrogant attitude towards her job. In spite of the fact that he makes her life more difficult professionally, personally the attraction between them can’t be ignored.

Jessie does her best not to cross any lines that could ruin her career by getting involved with a client. But each time they fly to the next location, Regan uses some rather creative measures underneath an airline blanket to make Jessie forget her fear of flying. By the time the tour makes it way to Los Angeles, all lines are crossed and Jessie finds herself in love with a man that knows how to charm and pleasure her, but isn’t capable of giving any more than that.

But fate has a way of intervening and showing Jessie and Regan what’s truly important.

Fear of Flying takes the reader on a steamy ride through the skies and in the bedroom from coast to coast. The writing is well-structured, giving romance readers what they crave: the meeting of the characters, their predicament in being stuck together, their resistance to each other, the eventual capitulation, the black moment, and the happily ever after. The story has a great pace to it that keeps the reader engaged, just in case the sexy Regan doesn’t keep them turning the pages.

All in all, Fear of Flying is a quick and pleasing read that made me want a Regan of my own for the next time I fly.
Read more
One person found this helpful
Helpful
Report abuse
See all reviews