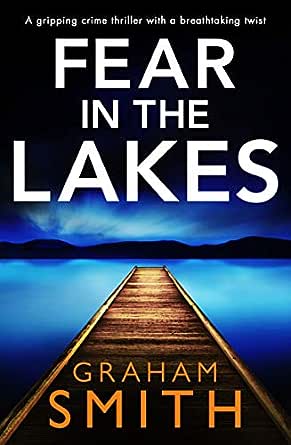 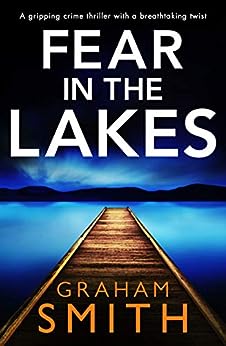 Fear in the Lakes: A gripping crime thriller with a breathtaking twist Kindle Edition

Denise Crawford
3.0 out of 5 stars Two victims, tortured nearly to death -- what's the story?
Reviewed in the United States on August 5, 2019
This is a police procedural featuring DC Beth Young of the FMIT out of Cumbria.

What it's about: A man, James Sinclair, has been found, barely alive, after surviving a horrendous attack that has resulting in all the bones of his lower legs and arms being systematically broken. The team first runs into a problem when James is found to have no past, no history. Who is he and why would someone do this to him? Even as the baffled team at FMIT tries to trace a clever killer, a pair of local hoodlums is killed with intricate carvings left on their heads. Did "the Sculptor" do that too, and how are they related to the James Sinclair case? Even as they race to identify future possible victims, the codes in email, the lack of evidence, and the frustration is about to do them all in. Will this serial killer escape? NO SPOILERS

Do you want to read? Well, first things first. I don't like the main character, Beth Young. Everything about her irritates me. Her "sideways thinking brain" is a joke and her personality is as flat as a pancake. There's nothing about her that makes me relate and her stupid obsession with finding the man who wielded the broken bottle to cause her scar has gotten really old here in book #3. At least she's gotten some information and answers in this outing, but I'm over it. Apparently, however, she's the DI Zoe Dowd's pet and she gets special treatment because she's oh so smart. There is also way too much narrative fluff that does nothing to move the plot forward so this story could have definitely been shortened. I found myself putting the book down many times and delayed picking it back up again and that's never a good sign for me. So, slow read. There's little to be said about the other members of the team as they are virtually only names on a page in this particular installment. What did I like? Well I do like police procedural novels where clues are found and suspects are detained and questioned. Unfortunately, since we heard the "voice" of the killer, we had a little motive there. I like the setting, but endless descriptions of snow don't do anything for me. All I can say is that this isn't my favorite. The whole plot really wasn't that interesting to be honest. And of course the worst part was when Beth ends up in the killer's clutches. I mean, really????

Anyway, I'm sorry this didn't do it for me. I did finish it and I'm not saying it's a bad book, and I figure anyone who's started the series will probably pick it up anyway. Overall, just disappointed in the thin story and in Beth as a character. I need a lot more to find a story gripping or thrilling.

Thank you to NetGalley and Bookouture for this e-book ARC to read and review. Will I be interested in reading #4? Well, it depends.

A man is found unconscious at home, almost every bone in his body carefully broken to ensure survival with maximum pain and long term disability. The FMIT is called in, but can find no evidence and the victim, a chef, appears to have led a blameless life. When two local thugs are found dead with bizarre injuries from symbols chiselled into their skulls, the team realise they are dealing with the sadistic killer from London known as The Sculptor. With a fierce snowstorm closing roads and preventing them following leads, Beth must use her penchant for puzzles to decode a series of emails and find the next victim before it’s too late.

Smith is a superb writer, and I love the way Cumbria itself becomes such a major character in the story, from the dangerous roads and changeable weather to the distance and sheer isolation of some of the places heroic Beth and her DI, the hilariously stroppy O’Dowd, must visit. Beth is a great character, brave and resourceful but not infallible. The progress made in her hunt for Neck Kisses was welcome, as while it’s good to have a backstory, I’m not a fan of them being overly drawn out, and what she discovers opens a whole new can of worms.

This had a good pace and interesting cast, including an obnoxious new DS who really needs to be put in his place. The villain was truly creepy, as we get some chapters from the Sculptor’s point of view, and I totally didn’t see the twist coming. While some awful things happen to the victims, we don’t witness them happening, thankfully, that would’ve been too gruesome for me.
My only criticism is how often O’Dowd repeats her line about Beth’s “sideways brain” or similar, it’s an unnecessary repetition that got annoying.
Special praise for the cover art which looks stunning even if it doesn’t necessarily relate to the plot (needed some snow!)

My thanks to NetGalley and Bookouture for the ARC which allowed me to give an honest review.
Read more
Helpful
Report abuse
See all reviews

C Knight
5.0 out of 5 stars What are you waiting for??
Reviewed in the United Kingdom on July 12, 2019
Verified Purchase
Yes I’m back in the beautiful county of Cumbria with the tenacious, puzzle solving Beth Young and what a treat Fear In The Lakes is.

Through the previous two books, I’ve loved the way Beth’s mind works and this latest outing is no different. She has her three word thought process that is totally unique and I admire the way she throws out the most random but surprisingly obvious suggestions when you look back at the case in hand.

Now then that aforementioned case in hand. Oh bejeezus what a psycho killer has hit Cumbria. The injuries that James Sinclair suffered seriously made me wince and his battering isn’t one I’ll forget in a hurry. Graham Smith seems to have a rather sick way of making his characters suffer but kind of equally weirdly, I like it. The imaginative tortuous injuries and deaths that come out of that man’s head are addictive making me come back for more each time!

And the imagery Mr Smith uses is bang on! As I read the various scenes in the snowy backdrop, my head was alive with images; this section I think most people will get….

“driving in snow to those moments in sci-fi films when a spaceship travelled at warp speed and the stars streamed past the windscreen.”

Fear In The Lakes is another cracking addition to the Beth Young series. It is a stand-alone read but Mr Smith keeps that ongoing story of Beth and her scar bubbling away in the background. So if you’ve read A Body In The Lakes, you need find out what happens next….and if you haven’t read it….WHAT ARE YOU WAITING FOR?!??
Read more
2 people found this helpful
Report abuse

Dan M
5.0 out of 5 stars Hard slice of Cumbrian crime
Reviewed in the United Kingdom on January 13, 2020
Verified Purchase
James Sinclair has been beaten to the point where he’s in a critical condition. In steps smart and resourceful DC Beth Young to work the case. When two more victims turn up with the same injuries, she realises that this isn’t any ordinary criminal.

This book was everything you could want from a crime novel – a clever plot, a likeable lead, a nasty villain – all wrapped up in detailed, well-researched police procedure.

Even though I didn’t realise this book was part of a series until about a third of the way through, it didn’t hamper my enjoyment at all – on the contrary, I’ve now gone back and picked up the earlier books. I’m looking forward to reading those and the next in the series!
Read more
2 people found this helpful
Report abuse

livia Sbarbaro
5.0 out of 5 stars A Dark Gripping Soul Touching Read.
Reviewed in the United Kingdom on August 30, 2019
Verified Purchase
When Laura Sinclair goes home one night and turns the key in the lock...in that moment her whole life falls apart..Her husband James lies broken on the floor..As D.C. Beth Young investigates she finds James was a man who has no enemies..When Beth gent!y probes Laura as James lies in a coma ...it seems Laura knows nothing of her husband's past..With a member of her team off due to personal reasons ..Beth has to work with McKay a sexist old school opinionated man ...You can feel the stormc!ouds gathering ...As Beth in her unique , problem solving way begins to break down walls , she encounters a face from the past that she knows she must confront ..When two more bodies are discovered the case takes a dark and deadly turn...A monster is preparing for an end game to c!is A a secret down forever...This is a crimson dark twisted read ...yet at some points soul touching as you delve into Beth's backstory...If you haven't read anything by Graham Smith this is hands up for me his best series ever ...
Read more
One person found this helpful
Report abuse

Lurky
5.0 out of 5 stars Gripping
Reviewed in the United Kingdom on July 25, 2019
Verified Purchase
Have now read all three books and can't wait for more. I like Beth and the fact that she uses her head and puzzle technique to solve the crimes. I was not expecting the twist when usually I can work out what to expect. Would highly recommend these books.
Read more
3 people found this helpful
Report abuse

Kindle Customer
5.0 out of 5 stars WOW that was one hell of a read.
Reviewed in the United Kingdom on July 17, 2019
Verified Purchase
I couldn’t and didn’t put it down until I had finished it, definitely my favourite, so far. DC Beth Young is back for the third book of the series but could easily be read as a standalone. Beth has to use her ‘sideways-thinking brain’ to try to get to grips with why, James Sinclair, a man who appears to have no enemies and is well liked, is left alive with multiple broken bones. James must have offended someone the attack is so wickedly evil and meticulous. Someone wanted him to suffer so was it personal? Thoroughly enjoyed from start to finish and absolutely a five star read.
Read more
2 people found this helpful
Report abuse
See all reviews