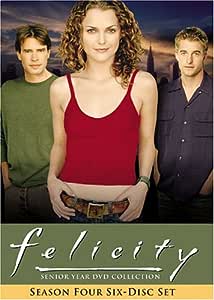 What began four years ago as a bold journey of self-discovery culminates in Felicity's stunning senior year. Relive all the heartfelt moments, heartwarming laughs, and heartbreaking decisions of the award-winning show's final season, and discover the fate of each of your favorite characters. Will Felicity move on to a new life with Ben, or will she end up with Noel? It's 22 episodes of drama and excitement that will keep you captivated until the very last minute.

If Felicity was always a collective portrait of young adults perpetually at a crossroads, then Felicity: Senior Year Collection (The Complete Fourth Season) concerns that moment when one realizes the long-deferred future of grown-up responsibilities has finally arrived. In other words, Senior Year is about decisiveness and commitment shaking things up among Felicity's tight-knit group of soon-to-graduate college friends and significant others, all of whom recognize now the urgency to make clearheaded choices that will permanently affect careers, family ties, love lives, and self-respect.

Not that any of Felicity's familiar characters are prepared for that kind of Hamlet-like pressure. Bad judgment, impulsiveness, the flotsam of unresolved relationships, envy, and selfishness are still driving forces behind the mercurial actions of art major Felicity Porter (Keri Russell) and her off-and-on boyfriend Ben Covington (Scott Speedman), former beau Noel Crane (Scott Foley), cynical pal Meghan Rotundi (Amanda Foreman), the latter's well-meaning hustler of a partner, Sean Blumberg (Greg Grunberg), and assorted students and confidantes who comprise Felicity's inner circle. But the stakes are much higher this time. Ben's alcoholic father (John Ritter in a sympathetic, touching performance), in true medical trouble, can no longer be angrily dismissed by the younger man as in previous seasons. A careless fling between Felicity and Noel is no mere bump in the road anymore for the former and her true love, Ben. Nor is Ben's imminent fatherhood (he and the young addict his father is sponsoring become pregnant) the kind of inconvenient wrinkle Felicity invariably forgave in the past. Everyone is playing for keeps now, and the absorbing dramas and tensions in each well-written, constantly surprising episode have an air of finality about them. Things get particularly interesting--arguably controversial--in the last two or three scripts, in which an anomalous time-travel gimmick (of all things) gives viewers an opportunity to see alternative finales for the four-year-old series. It's a go-for-broke idea that asks Felicity's loyal audience to take a leap of faith just to see what happens, and the results are indeed unexpected and rewarding. Special features include a particularly good, behind-the-scenes documentary about the making of the last episode. --Tom Keogh