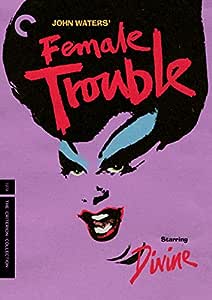 Glamour has never been more grotesque than in Female Trouble, which injects the Hollywood melodrama with anarchic decadence. Divine, director John Waters’ larger-than-life muse, engulfs the screen with charisma as Dawn Davenport—who progresses from a teenage nightmare hell-bent on getting cha-cha heels for Christmas to a fame monster whose egomaniacal impulses land her in the electric chair—in the ultimate expression of the film’s lurid mantra, “Crime is beauty.” Shot in Baltimore on 16 mm, with a cast drawn from Waters’ beloved troupe of regulars, the Dreamlanders (including Mink Stole, David Lochary, Mary Vivian Pearce, Edith Massey, and Cookie Mueller), this film, the director’s favorite of his work with Divine, comes to life through the tinsel-toned vision of production designer Vincent Peranio and costume designer/makeup artist Van Smith. An endlessly quotable fan favorite, Female Trouble offers up perverse pleasures that never fail to satisfy.

• PLUS: An essay by film critic Ed Halter

4.9 out of 5 stars
4.9 out of 5
177 global ratings
How are ratings calculated?
To calculate the overall star rating and percentage breakdown by star, we don’t use a simple average. Instead, our system considers things like how recent a review is and if the reviewer bought the item on Amazon. It also analyzes reviews to verify trustworthiness.

Scott Lehmann
5.0 out of 5 stars If you don’t watch this movie you’ll have a sick and boring life.
Reviewed in the United States on June 30, 2018
Verified Purchase
This is my favorite John Waters movie. It is tasteless and endlessly quotable. It also has moments where its social commentary is still scarily accurate. I will never get tired of “Female Trouble” despite having seen it repeatedly for the last 25 years.

I have owned this movie in other formats, but in the Criterion Collection edition, the colors really pop and the image is clearer and sharper than I’ve ever seen it...too clear maybe? LOL

This makes a nice companion disc to Criterion’s excellent release of “Multiple Maniacs”. Here’s hoping they can soon give us “Pink Flamingos”, “Desperate Living”, “Polyester”, “Serial Mom”, “Cry Baby” and “Pecker”. I’m not sure “Hairspray” needs the Criterion treatment, so I left that out.

John Waters’ fans, what are you waiting for? Buy this now.

Brian P. Clark
5.0 out of 5 stars Pink Fla-what-gos? Model, Dawn, MODEL!!!
Reviewed in the United States on July 6, 2018
Verified Purchase
Absolutely stunning and snide burlesque of human culture. This is my favorite movie of all time... and I've got lots of problems. Maybe I'm twisted...

The bluray is gorgeous considering the source material. I have no idea how Criterion got this 16mm print to look so good.
Read more
16 people found this helpful
Helpful
Comment Report abuse

Damon Devine
5.0 out of 5 stars It'll Never Get Better Than This
Reviewed in the United States on July 7, 2018
Verified Purchase
Worth every penny. The extras are everything you hoped for, and the transfer is incredible.
Read more
14 people found this helpful
Helpful
Comment Report abuse

rickshayne
5.0 out of 5 stars my all-time favorite John Waters movie along with Serial Mom
Reviewed in the United States on July 23, 2018
Verified Purchase
I don't know what's going on at Criterion headquarters because first they gave us Multiple Maniacs, and I thought it would be a one-off, but now they go and do Female Trouble, my all-time favorite John Waters movie along with Serial Mom.
Let's be honest and admit that we'd have never thought for one second that a renowned studio like Criterion would tackle Water movies because while having tons of merit, they are quite extreme and it's a fantastic gift that they regard them as highly as mainstream-regarded classics.
The extras are fantastic, you get to see interview with almost all of the cast and crew!
I really wish that we'd still get the cardboard packaging instead of boring plastic ones though.

Now, give us Serial Mom, Soapdish and Clueless and I can die in peace.
Read more
6 people found this helpful
Helpful
Comment Report abuse

Andrew M
5.0 out of 5 stars Who wants to die for art?
Reviewed in the United States on June 27, 2018
Verified Purchase
The world of the heterosexual is a sick and boring life. That being said, real life woman, Dawn Davenport is here to prove you wrong.
Read more

Vanessa ClarkTop Contributor: David Bowie
2.0 out of 5 stars I Love/Hate This Movie
Reviewed in the United States on November 20, 2018
Verified Purchase
I have a love/hate relationship with this movie. I was really expecting this to be amazing, but the first time I watched it, I couldn't keep my eyes open, at some point I fell asleep through it. Something about it is so boring, but of course it's also intriguing. Every scene with Divine (and with Edith Massey) is a revelation, really! But that's really about it. Those two made this movie, but it felt like they hardly had much of a spotlight. I didn't care for any of the side characters, especially Taffy, and Mink Stole as Taffy when she's a little older. I was surprised at how much she overpowered the scenes and almost most of the movie, like, it was just too much, and who cares? There was just too much of that character screaming and flailing about and not enough Edith or Divine. Loved the grossness of some scenes tho (like the bloody baby, any male nudity and male crotch shots are always refreshing, even if it was intentionally nasty looking lol, we just see them so rarely, and other gross details like poop stains, etc.) lol. And not to mention. THE COSTUMES. They were gorgeous. But on the whole, it's not that this movie wasn't for me, but for how hyped this movie is by John Waters fans, I was just expecting something more. I guess I was just underwhelmed.
Read more
One person found this helpful
Helpful
Comment Report abuse

Eric Sassaman
5.0 out of 5 stars A beautiful Criterion release
Reviewed in the United States on July 13, 2018
Verified Purchase
An all-time favorite in a beautiful Criterion release. The extras make it super worth it. A twisted, witty and wonderful early film from John Waters with Divine in, what I think is, her best role. LOVE THIS!
Read more
6 people found this helpful
Helpful
Comment Report abuse
See all reviews

KaseyG
5.0 out of 5 stars Worth It For Bonus Features Alone!
Reviewed in Canada on July 1, 2018
Verified Purchase
Wickedly witty, endlessly quotable with a prescient message about fame/celebrity culture, this new Criterion release of John Waters’ FEMALE TROUBLE is the only one to own, so donate your old DVDs to the less fortunate. After all, they need some depravity in their lives too!

The remastering looks fantastic; the colors on Vincent Peranio’s sets and Van Smith’s costumes just pop! But the Bonus Features are what make this a must-have. Over two hours’ worth not counting the commentary. There are new/recent interviews with John, Hilary Taylor (young Taffy) and some that were lifted from the 2013 I AM DIVINE documentary. What’s great about these is how there is no phony Hollywood BS about John or any of these people. They just tell it like it is with no hidden agenda or fake PR personas to uphold. There’s also some new tidbits in these instead of the same old stories we die-hard Dreamland fans have heard over and over.

But the archival material is the stuff we fans want and this set delivers in spades. There are plenty of outtakes and deleted scenes but most of them are in black-and-white since John admits he was too cheap to use color film for the work prints. We see a deleted scene in the Davenport kitchen on Xmas Eve after Dawn’s expelled from school—fascinating stuff! Lots of color stills and behind-the-scenes color photos never seen before too. There’s a 1975 roundtable interview filmed at Andy Warhol’s Factory and while the video quality isn’t the best, it’s great *and bittersweet* to see John, Divine, Mink Stole and David Lochary all together in such a setting. They discuss the (then) recent release of the film and everyone chain smokes incessantly—except Divine—who sits there in half-drag with full makeup and a headscarf that makes him look like a plus-sized Little Edie (Beale of GREY GARDENS). Mink looks absolutely striking and David’s hair looks normal! The filming continues even as they are leaving and putting on their coats and scarves and you see Divine admiring some tchotchke “Ooh, that’s nice” and somebody in the background yells “Don’t take anything!”.

If you are a John Waters/Divine fan, this is a no-brainer. I would have paid over $100 for this!
Read more
One person found this helpful
Report abuse

christopherryan
5.0 out of 5 stars Masterpiece!
Reviewed in Canada on June 25, 2018
Verified Purchase
John Waters and Divine at their finest. So happy to have this released through Criterion. So hilariously distasteful. A gem!
Read more
Report abuse