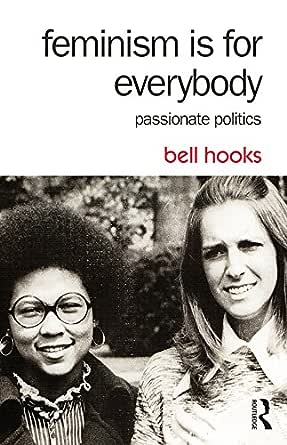 Feminism Is for Everybody: Passionate Politics 2nd Edition, Kindle Edition

Flip to back Flip to front
Audible Sample Playing... Paused   You are listening to a sample of the Audible narration for this Kindle book.
Learn more
ISBN-13: 978-1138821590
ISBN-10: 1138821594
Why is ISBN important?
ISBN
This bar-code number lets you verify that you're getting exactly the right version or edition of a book. The 13-digit and 10-digit formats both work.

Praise for Feminism Is for Everybody:

"bell hooks has always written in a very readable style, eschewing footnotes because people in her hometown told her they were put off by books with footnotes. This time, she set out to write a book that explains feminism, particularly for a mainstream audience….certainly she has once again made the point that feminists need to try to reach women of all races and classes." ―Carol Anne Douglas, Off Our Backs (2001)

A cultural critic, an intellectual, and a feminist writer, bell hooks is best known for classic books including Ain’t I a Woman, Bone Black, All About Love, Rock My Soul, Belonging, We Real Cool, Where We Stand, Teaching to Transgress, Teaching Community, Outlaw Culture, and Reel to Real. hooks is Distinguished Professor in Residence in Appalachian Studies at Berea College, and resides in her home state of Kentucky.

4.5 out of 5 stars
4.5 out of 5
270 global ratings
How are ratings calculated?
To calculate the overall star rating and percentage breakdown by star, we don’t use a simple average. Instead, our system considers things like how recent a review is and if the reviewer bought the item on Amazon. It also analyzes reviews to verify trustworthiness.

Beverly Diehl
5.0 out of 5 stars Groundbreaking, mythbusting, extensive
Reviewed in the United States on March 14, 2018
Verified Purchase
Wow, for a short book, without too many five dollar words, this work is extremely thorough and requires a lot of work and contemplation on the part of the reader.

hooks covers so much ground, so many facets of feminism in this work. From what consciousness raising is, to reproductive rights, to the impact of beauty standards, race and gender, classism, parenting, hetero and LGB relationships... Feminism is about love, and more, it's about freedom for men and women, to get away from the toxic societal models that are literally killing us.

"Most citizens of this nation still do not understand the link between male domination and male violence. And that failure to understand is underscored as our nation is called upon to respond to violent murders of family members, friends, and schoolmates by young males of all classes."

Feminism, for those in the back, is NOT about hating men. hooks likes men; I love them - most feminists I know, love men as well as women. When hate enters the picture, it's about hating a dynamic that pits men and women against each other, that forces people into stereotypes that don't fit them. hooks addresses the problems created when feminism seemed to become white, academic, and classist, and encourages us all to learn about intersectionality (something I'm not great at yet, but am working on it).

"If feminist movement had not offered a true accounting of the dangers of perpetuating sexism and male domination, it would have failed. There would have been no need to mount an anti-feminist campaign." There's a backlash BECAUSE doing something other than the thing we know, patriarchy, is terrifying to many, and threatens those who might lose their privilege.

Yet if they did, there's so much to be gained, for all of us. Feminism is for everybody.

Anthony Pignataro
5.0 out of 5 stars This book is for everybody
Reviewed in the United States on December 13, 2017
Verified Purchase
This is an outstanding book, written clearly and simply, that lays out the modern history and goals of feminism. It's easy to follow, even for someone who isn't already familiar with feminist theory. It's a very smart book that challenges everyone, men and women, to think about power and privilege.
Read more
6 people found this helpful
Helpful
Comment Report abuse

JustACustomer
5.0 out of 5 stars Very informative
Reviewed in the United States on January 11, 2018
Verified Purchase
It is essentially one of the foremost informative books on feminism, besides "Why we should all be Feminists?". It makes all the concepts clear, a drawback I have is that there isn't a glossary for all the terms.
Read more
3 people found this helpful
Helpful
Comment Report abuse

Sarah
1.0 out of 5 stars Countless spelling and grammatical errors
Reviewed in the United States on July 22, 2019
Verified Purchase
This Rutledge published book is full of spelling and grammatical errors. I'm really disappointed I spent $20 on something full of errors that I could have read for free online.
Read more
One person found this helpful
Helpful
Comment Report abuse

Ann Stader
3.0 out of 5 stars Mediocre
Reviewed in the United States on May 16, 2017
Verified Purchase
This was a good read for understanding the history of feminism, how it has been misrepresented, and in educating how we all contribute to a dialogue and a culture that should embrace equality. However, for the new edition, there was no update as to how to discuss feminism and educate in a broader sense according to our culture, social media, millenialism, etc. It felt old, stale and outdated in ways. And for as many times as bell hooks mentioned feminist education needing to be easy to read and understand, I found many paragraphs hard to focus on for all the jargon.
Read more
5 people found this helpful
Helpful
Comment Report abuse

Juan Pablo Madiedo Zuniga
5.0 out of 5 stars Excellent book
Reviewed in the United States on November 14, 2018
Verified Purchase
Excellent book. Although you need to know a little bit about feminism to understand it better.
Read more
Helpful
Comment Report abuse

Gaby
5.0 out of 5 stars Amazing!
Reviewed in the United States on July 28, 2020
Verified Purchase
I love this book, it’s a great introduction to feminism, the author makes it very easy to understand and it’s not overwhelming long or hard to get through. Great quick book to have a better understand of feminism!
Read more
Helpful
Comment Report abuse

Farhana Qazi
5.0 out of 5 stars A beautiful book
Reviewed in the United States on June 11, 2018
Verified Purchase
Beautifully written! A must read for all women and men to understand that feminism is truly for everybody; we all have a role to stand for women and to support gender rights.
Read more
2 people found this helpful
Helpful
Comment Report abuse
See all reviews

Connie
5.0 out of 5 stars Five Stars
Reviewed in the United Kingdom on November 22, 2017
Verified Purchase
Bought as a gift
Read more
Report abuse

piramol
5.0 out of 5 stars Five Stars
Reviewed in the United Kingdom on February 10, 2015
Verified Purchase
A must read for anyone seeking to know more about feminism
Read more
3 people found this helpful
Report abuse

Kiki
5.0 out of 5 stars Great book – highly recommended!
Reviewed in Germany on June 22, 2019
Verified Purchase
This is an excellent book on feminism that manages not to be too theoretical but still delves deep. Recommend this book to everyone and anyone interested in feminism as a bigger picture: it offers not only a definition of feminism but examines topics such as race, gender & class, feminist parenting/masculinity/sexual politics – and much more. Great book!
Read more
Report abuse