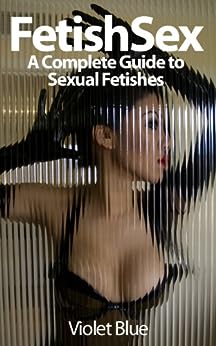 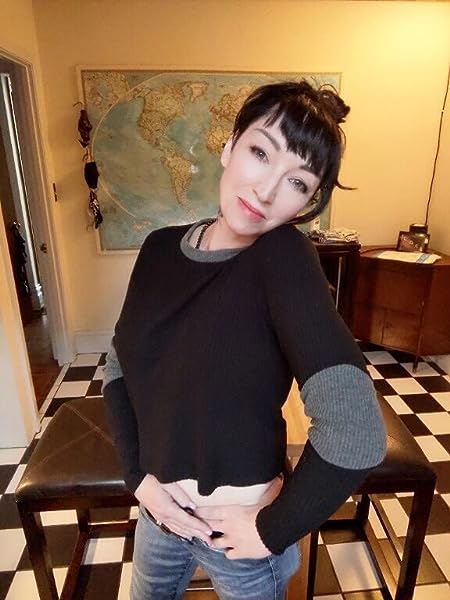 by Violet Blue (Author) Format: Kindle Edition
See all formats and editions
Sorry, there was a problem loading this page. Try again.
What's a plushie? What if your lover says they're into rubber... or something you've never even heard of? And what if you're the one with the fetish?

Fully updated with current resources for 2016. Sexy, cool, informative and practical - Bestselling classic Fetish Sex has been completely updated, revised and expanded to include every kind of sexual fetish imaginable. This book defines and explains more real-life sexual fetishes than anyone has imagined to date.

In plain and playful language, bestselling author Violet Blue shows readers how to enjoy sexual fetishes as a healthy sex toy just like any other, no matter how ordinary or unusual. This completely revised, updated and expanded second edition makes Fetish Sex the most complete book on sexual fetishes available.

Think you might have a fetish? This guide tells you if you do, or not. And if you do, this is where to learn how to make the most of it in safety, pleasure and answers questions about sharing fetishes. The truth is, "normal" sex is exactly the kind of sex you enjoy.

Fetish Sex is packed with information and guidance for individuals of all genders and sexual orientations, for singles and solos, for couples, and for sex educators everywhere. Fetishes are clearly defined; rubber, medical, age-play, human animals, panties, corsets, shoes, body parts, Japanese curiosities, human dolls, cross-dressing, sissies, strange or shocking, extreme and impossible fetishes, and much more are included in detail.

This guide is for understanding, controlling and making the most of your - or your lover’s - fetish.
Read more
Previous page
Next page

Violet Blue's journalism on hacking, privacy, LGBT issues and sex can be seen at Engadget, ZDNet, CNET, CBS News, Oprah Magazine, MacLife, Playboy, SF Appeal, the San Francisco Chronicle, and more. She has presented two Google Tech Talks on sexuality and privacy, she is a crisis counselor, a harm reduction educator and a media crisis NGO trainer. Blue was the first female podcaster, she won a Federal lawsuit to stop an impersonator (in name and likeness), and she lost a domain to Libya -- her initials are banned for use in URLs country-wide.

Ms. Blue has authored and edited over 40 books, including five (Bronze, Silver and Gold) IPPY award-winners, some of which are now in eight translations. Violet was a guest on the Oprah Winfrey Show, when Ms. Winfrey featured Violet's book on women and pornography (11/17/09). That book is also excerpted and featured on Oprah Winfrey's website, as well as in O, The Oprah Magazine.

Ms. Blue is on Twitter @violetblue and her human sexuality blog is tinynibbles.com.

Blue has reported on hacking, cyber crime and personal privacy violations in countries such as Malaysia, Germany, Russia, China, the Dominican Republic, the United States, and Serbia. Her stories regularly break news about hacking and cybercrime, affecting the largest online companies and millions of users. Blue broke the story when Anonymous hacked The U.S. Federal Reserve ("The Fed" Bank), the story in which social sharing app Snapchat was hacked and its user database maliciously exploited, and when Comcast was hacked and millions of user accounts were compromised. She is also responsible for breaking several critical stories in which Apple iMessage and Apple iCloud were exploited, and when hackers showed how to hack an Apple iPhone in 60 seconds.

Ms. Blue has given keynote talks at such conferences as ETech, LeWeb, and the Forbes Brand Leadership Conference, she received a standing ovation at Seattle's Gnomedex, and has given two Tech Talks at Google. In 2012, Blue presented "Hackers and Harm Reduction" on the featured stage for CCC's 29c3 hacker conference in Hamburg.

The London Times named Violet Blue one of "40 bloggers who really count."

Angie
4.0 out of 5 stars Fetishes Guide
Reviewed in the United States 🇺🇸 on April 30, 2014
Verified Purchase
I am not really sure how to rate this book it is more like a how to guide about sexual fetishes. I read this book and I really didn't learn anything new about myself, because I know what my fetishes are. I gave this book 3.5 because the book was well written and covered a lot of topics to help a person who is not sure of what turns them on. So if you are not sure or think you are the only person who gets turned on by certain things then this book can be a help to you.
Read more
One person found this helpful
Helpful
Report abuse

Courtney C. Campbell
2.0 out of 5 stars Missing a few
Reviewed in the United States 🇺🇸 on December 30, 2011
Verified Purchase
So, I was excited about this book, and it is indeed a very sex positive and sex empowering book.

But to portray it as a "complete guide" is sort of farcical.

I am by no means a sexual deviant or obsessed with sexuality, but while reading it I could think of many fetishes that were not represented even in passing. . .

Where's cuckolding, slut wives, hypnotism or mind control fetishes? What about bottles, sex shows, strippers and captured damsels? And those are the ones off the top of my head, not the dozen more I could find with research.

I expected it to be comprehensive and it wasn't.

What it does cover is sex positive and useful - if your fetish is in there.
Read more
5 people found this helpful
Helpful
Report abuse

Tern About
2.0 out of 5 stars I had to stop reading it.
Reviewed in the United States 🇺🇸 on January 12, 2014
Verified Purchase
I got so frustrated with the author's writing style; repetitive and wordy. I wanted to love this book. I've heard so many good things about Violet Blue and she has a great reputation as an educator, but I just couldn't stay with the book. After a page or two I'd be skimming, trying to figure out when she was going to actually move forward into something new rather than re-say (again) what she'd already said.

Maybe ideal for someone who has no prior understanding of fetishes?
Read more
One person found this helpful
Helpful
Report abuse

William
4.0 out of 5 stars Four Stars
Reviewed in the United States 🇺🇸 on February 26, 2015
Verified Purchase
Interesting book. Not a fetish sex manual. Everything you wanted to know about fetishes but were afraid to ask.
Read more
Helpful
Report abuse

Selinica Harbinger
5.0 out of 5 stars Great
Reviewed in the United States 🇺🇸 on November 15, 2013
Verified Purchase
Useful, interesting and informative. Definitely worth the cost. Even if you only have a minor curiosity about any sex beyond vanilla or what others are interested in, it's a great and informative read that is open and honest.
Read more
One person found this helpful
Helpful
Report abuse

Gianna Figueiredo
5.0 out of 5 stars Very well written and tons of information!
Reviewed in the United States 🇺🇸 on August 8, 2013
Verified Purchase
This book completely covers everything and was a fantastic read! Thanks to all the work put into this....it covers just about everything concerning fetishes. I was pleasantly surprised. Very objective and intellectual!
Read more
One person found this helpful
Helpful
Report abuse

Ms. S.
5.0 out of 5 stars Fetishes in positive light
Reviewed in the United States 🇺🇸 on November 25, 2013
Verified Purchase
Though neither complete nor thorough, this book gives a delightfully positive look at many sexual fetishes. I enjoyed the book, and recommend it for the curios or psychology student.
Read more
3 people found this helpful
Helpful
Report abuse

dave94015
4.0 out of 5 stars Fetish Sex by Violet Blue - Review
Reviewed in the United States 🇺🇸 on December 29, 2011
The book Fetish Sex by Ms. Violet Blue presents the subject in two parts: the first is a discussion about the psychological and social aspects of fetishes, the second part is a catalog of the popular sexual fetishes.

In the first part of the book Ms. Blue discusses how adjust to fetishes from the point of view of a couple, such as how to recognize a fetish in yourself or your partner and how to integrate it into the relationship. Ms. Blue takes a sex-positive direction which can be summed up (briefly) as: acknowledge it in yourself or in your partner and work it into the relationship.

The second part of the book is a description of popular fetishes that the reader can check for a match. If there is a fit, the reader learns how engage themselves or their partner into the fetish. Some fetishes are described only briefly, while others are presented with extensive detail.

Who is this book for? If you are in a stable relationship but are curious about how to spice up your sex life, or you discover that you or your partner has an interest in a fetish, this book may have useful advice and information. If your relationship is unstable, adding a fetish element to the sex may exacerbate the instability. The book provides useful references for obtaining additional information and help.

Reviewer received a free advance copy in exchange for the review. I received a draft copy with formatting problems which I communicated to the author.
Read more
2 people found this helpful
Helpful
Report abuse
See all reviews

Liam Mariscotti
3.0 out of 5 stars Good
Reviewed in the United Kingdom 🇬🇧 on May 9, 2012
Verified Purchase
A good book, although the author claims to cover most if not all sexual fetishes, but I would have to disagree here. I was waiting for some to be mentioned, of the more extreme BDSM variety, out of curiosity of course, but they were not mentioned. Disappointing in this regard as it is not a complete guide to sexual fetishes. However, for those out there who wish to broaden their sexual horizons from the vanilla, this book provides some interesting reading.
Read more
Report abuse

M. F. Bradshaw
2.0 out of 5 stars Two Stars
Reviewed in the United Kingdom 🇬🇧 on February 14, 2015
Verified Purchase
downloaded straight away but I have not read it yet
Read more
Report abuse
See all reviews
Report an issue
Does this item contain inappropriate content?
Report
Do you believe that this item violates a copyright?
Report
Does this item contain quality or formatting issues?
Report