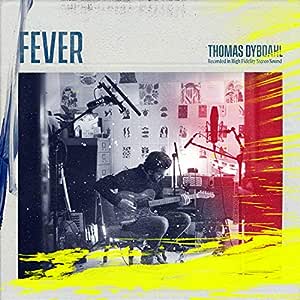 THOMAS DYBDAHL (Artist) Format: Vinyl
4.6 out of 5 stars 3 ratings
See all 3 formats and editions Hide other formats and editions
Includes FREE MP3 version of this album.&nbspProvided by Amazon Digital Services LLC. Terms and Conditions. Does not apply to gift orders.&nbspComplete your purchase to save the MP3 version to your music library.
Available at a lower price from other sellers that may not offer free Prime shipping.

When the 19-year-old Norwegian Thomas Dybdahl released his two first EPs 'Bird' & 'John Wayne' in 20002001 he appeared as nothing but a small blip on the musical radar in Norway. Interest was piqued somewhat by the single 'Love's Lost', but it wasn't until his debut album ' that great October sound' in 2002 that he got people's attention for real. With a dogmatic onemicrophone-only approach, a soulful tenor voice, an intimate acoustic sound and good songs he soon found his way onto the airwaves in Norway. What followed was a slew of great reviews, awards and a growing fan base all over the world. In addition to being a solo artist he has made a career composing for film and theatre. For his first score he received the Norwegian 'Amanda' award, the highest honour for a film composer. He has also worked as a producer, songwriter and as a front man in the band The National Bank, as well as guesting with other acts ranging from Morcheeba to French singer Melanie Pain all the way to folk icon Judy Collins. Having the status as a 'musician's musician', he was quickly discovered by a host of other artist like Elvis Costello, Jamie Cullum and taste makers like LA's indie radio station KCRW and one of his early fans was Grammy Award winning music producer Larry Klein (Joni Mitchell, Herbie Hancock, Tracy Chapman). The two worked together on Thomas' 2013 album 'What's Left Is Forever', which was nominated for a Grammy the following year as well as 2018's 'All These Things' On the 20th of September, Thomas Dybdahl releases his brand new single '45'. Recorded in Thomas' 1micadventure studio in Stavanger, Norway, the song was co-produced with long-time collaborator and studio partner Havard Rosenberg, known for his productions for urban and hip hop artists in Norway. During the recordings of '45', the two used an old Tandberg 2 track recorder Thomas inherited from his grandfather, on which all guitars were recorded. On this tape recorder, Dybdahl and Rosenberg found old recordings of Thomas' father and uncles discussing their dreams for their future as kids in the 1960s. This conversation inspired the lyrical theme of the new single - a take on the old 'get the hell out of this small town, before it's too late' tale, as well as a contemplation on own ambition and goals while getting older. Some things you might not be able to do for yourself, but maybe there's a chance to help someone else achieve their dreams.

James W
VINE VOICE
5.0 out of 5 stars Gotta Chase That Dream...
Reviewed in the United States on March 20, 2020
Thomas Dybdahl has more than earned the consistent praise he’s received over the course of his nearly twenty-year career. With Fever, the Norwegian singer-songwriter’s latest release (and ninth full-length overall), Dybdahl channels his indie/retro R&B influences into what might be his most focused, sensual musical statement to date.

The upbeat, funk-laced album-opener “45” nearly leaps from the speakers, as Dybdahl cleverly waxes poetic over an instantly-infectious riff. From that point forward, the record is a balanced mix of groove-driven numbers (“Then There Was You” and “Dance the Pain Away”), and simmering, laid-back tracks (like “Fever”, “On My Way To California”, and the brilliant “Call Me by Your Name”). While Fever is solid from front to back, Dybdahl closes it out with two of the album’s best tracks, the stage-ready “Patience” and the appropriately entitled ballad “The Last Song”.

From a production standpoint, Fever ‘sounds’ amazing. Opting to focus on a ‘full-band’ mix this time around, Dybdahl (who provides most of the instrumentation) fleshes out the drum & bass-driven arrangements with his consistently impassioned vocals and some judiciously placed guitar licks, instantly setting Fever apart from some of the singer’s more recent work (such as the brooding All These Things or the experimental The Great Plains).

In fact, with nine tracks (including an “Intermission”) clocking in at a paltry twenty-nine minutes, one could easily argue that the only thing ‘wrong’ with Dybdahl’s latest release is that it’s too damn short. With all of that being said, in an era where ‘quantity over quality’ seems to be the name of the game, Thomas Dybdahl’s Fever is not only an instant-classic, it’s downright refreshing.