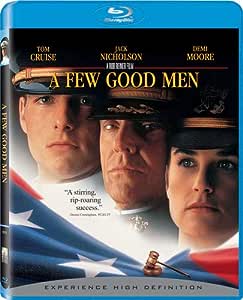 Tom Cruise, Jack Nicholson and Demi Moore star in Rob Reiner's unanimously acclaimed drama about the dangerous difference between following orders and following one's conscience. Cruise stars as a brash Navy lawyer who's teamed with a gung-ho litigator (Moore) in a politically explosive murder case. Charged with defending two Marines accused of killing a fellow soldier, they are confronted with complex issues of loyalty and honor, including its most sacred code and its most formidable warrior (Nicholson). Superbly directed with a trio of powerhouse performances and an outstanding supporting cast including Kevin Pollak, Kiefer Sutherland and Kevin Bacon.

A U.S. soldier is dead, and military lawyers Lieutenant Daniel Kaffee and Lieutenant Commander JoAnne Galloway want to know who killed him. "You want the truth?" snaps Colonel Jessup (Jack Nicholson). "You can't handle the truth!" Astonishingly, Jack Nicholson's legendary performance as a military tough guy in A Few Good Men really amounts to a glorified cameo: he's only in a few scenes. But they're killer scenes, and the film has much more to offer. Tom Cruise (Kaffee) shines as a lazy lawyer who rises to the occasion, and Demi Moore (Galloway) gives a command performance. Kevin Bacon, Kiefer Sutherland, J.T. Walsh, and Cuba Gooding Jr. (of Jerry Maguire fame) round out the superb cast. Director Rob Reiner poses important questions about the rights of the powerful and the responsibilities of those just following orders in this classic courtroom drama. --Alan Smithee

4.8 out of 5 stars
4.8 out of 5
3,780 global ratings
How are ratings calculated?
To calculate the overall star rating and percentage breakdown by star, we don’t use a simple average. Instead, our system considers things like how recent a review is and if the reviewer bought the item on Amazon. It also analyzes reviews to verify trustworthiness.

For me, “A Few Good Men” is a film that has it all. In addition to its all-star cast, it features an almost perfectly written screenplay by Aaron Sorkin, and expert direction by Rob Reiner.

For those not familiar with “A Few Good Men,” it is a legal/courtroom drama about a young, supercilious Navy lawyer, Lieutenant Daniel Kaffee (Cruise). With no courtroom experience at all, Kaffee is assigned to defend two young enlisted Marines (played by Wolfgang Bodison and James Marshall) accused of murdering another Marine. Kaffee and his co-counsel, Lieutenant Sam Weinberg (Pollack), are both being closely monitored by Lieutenant Commander Jo Galloway (Moore), a Navy Internal Affairs lawyer.

As the case unfolds, big problems loom for Kaffee, Weinberg, Galloway, and the two accused Marines. The alleged murder was committed at the Marine Corps base in Guantanamo, Cuba. The commanding officer there is Colonel Nathan Jessup (Nicholson), a politically well-connected senior officer who’s about to be promoted to a staff position inside the White House. Marine Captain Jack Ross (Bacon), the prosecutor in the case, initially appears receptive to making a plea deal, but then suddenly backs away. A Marine Corps counter-intelligence officer (Walsh) and an untrustworthy platoon leader (Sutherland) further complicate matters for Kaffee and his legal team, who face an ever-increasing number of legal obstacles to securing an acquittal for their clients…

I can always count on “A Few Good Men,” with its superb cast, beautifully crafted story, and tremendous production values, to provide me with two-plus hours of wonderful entertainment. I’ve watched it dozens of times over the past quarter-century, and I never tire of it. It’s always a pleasure for me to sit down, fire up my Blu-ray player, HDTV, and surround-sound home theater system, and view this marvelous film in glorious high definition. Most highly recommended.

H. Bala
TOP 100 REVIEWER
5.0 out of 5 stars betcha even R. Lee Ermey is impressed with Jack
Reviewed in the United States on June 11, 2018
Verified Purchase
When I'm in a mood for a riveting courtroom drama, 1992's A Few Good Men is often my huckleberry. It's close to being my favorite Tom Cruise movie, up there with The Firm, Minority Report, Edge of Tomorrow, and my guilty pleasure, Far and Away. This is also my favorite Demi Moore performance, my favorite Kevin Pollak performance, and my favorite Jack Nicholson performance. This movie is amazingly acted.

When two marines are charged with the murder of a weakling marine at the naval station in Guantanamo Bay, Cuba, the U.S. Navy JAG Corps deploys LtJG. Daniel Kaffee (Cruise) as their legal counsel. And it's a head scratcher, for sure, Kaffee's snagging that assignment. Kaffee is a little over a year out of Harvard law and has been in the Navy only nine months. He hasn't tried a case, ever. Instead, he's known as the king of plea bargain, having successfully plea-bargained 44 cases in nine months. It's as if someone has got it out for those two charged marines.

Lt. Kaffee is the sort of swaggering, loosey-goosey lawyer that drives dedicated, by-the-book practicioners of law so crazy, for instance, Lt. Cdr. JoAnne Galloway (Moore), Special Counsel for Internal Affairs. Note that Jo had wanted the case for herself but now has to settle for being second chair co-counsel to a Lieutenant Junior Grade. Jo is earnest. Kaffee doesn't take things seriously. So, yeah, tension.

I was about to say this is the best directing Rob Reiner's ever done, until I remembered he also helmed The Princess Bride, Misery, and When Harry Met Sally...

It's one hell of a character study featuring at its core the portrait of an indolent young lawyer who chafes under the shadow of his legendary lawyer father. As the movie progresses, as the momentum of the case takes our JAG officers down unexpected side paths, as the stakes continue to mount, and as Kaffee squares off against the sneering U.S. Marine Colonel Jessep during lunch, observe Kaffee at last begin to give two fcks.

Colonel Jessep? It's a part inhabited with ferocity by a prime Jack Nicholson. Nicholson doesn't snag a lot of screen time, but, oboy, does he make the most of what he's given. That above-mentioned scene in which Jessep holds court at the lunch table and indulges in a bit of misogyny and taunts Kaffee, that is a nerve-jangling scene. You can see why it serves as Kaffee's wake-up call.

I was still in the Navy when A Few Good Men came out in '92. I think the only time I had more of a blast watching a flick with fellow sailors was when Under Siege came out. These characters stuck with me. The cocky Kaffee who finally gets to try a case. The earnest, passionate Jo Galloway. The wry observer and calm voice of reason that is Kaffee and Jo's co-counsel, Lt. Sam Weinberg (Pollak, who scores some of the best lines). Even the side characters are memorable, from Kiefer Sutherland's disturbing Lt. Kendrick to Kevin Bacon's quietly confident prosecutor, Marine Capt. "Smiling" Jack Ross.

The writing's so good. I wasn't surprised to find out, recently, that Aaron Sorkin wrote the screenplay. I heard A Few Good Men is regularly dissected in acting classes, that's how much the movie has to offer.

Yep, I knew what a blanket party was, and a code red. And I knew those activities happened. It happened when I was in boot camp. The crux of Kaffee's defense rests on whether he can compel the almighty Colonel Jessep to admit he ordered a code red. It's a movie that triggers discussion about honor and tradition and when to question authority versus when to mindlessly obey an order because it's been pounded into our military noggins that instant and absolute compliance saves lives. I'll say this about Jessep's perspective: he wasn't wrong. He just went about it the wrong way. I agreed more with Jessep's perspective than with that of J.T. Walsh's sympathetic Lt. Colonel.

Over the years Tom Cruise has given us glimpses of his being a strong actor. But while he may have been nominated for Best Actor in 1989's Born on the Fourth of July, I contend that he was never better than when he went toe to toe against a scene-chewer of Nicholson's caliber.

Speaking of whom, I have to believe Jack was at the height of his powers when he played the rabid Colonel Jessep. He's simply mesmerizing as he barks and snarls and delivers one of the hands-down, all-time classic speeches in cinema. There are only very few courtroom movies I'd put on the same level as A Few Good Men: To Kill A Mockingbird, 12 Angry Men, The Verdict, Philadelphia, and, yes, My Cousin Vinny. It's Jack's powerhouse, I-will-bite-your-dick-off performance that edges the others out.
Read more
7 people found this helpful
Helpful
Comment Report abuse
See all reviews

Melvin (Nicholson): Well, maybe I overshot a little, because I was aiming at just enough to keep you from walking out."

Bridget
5.0 out of 5 stars Great Film
Reviewed in the United Kingdom on September 18, 2017
Verified Purchase
One of my firm favourites.Used to have this film years ago on video. Some extremely good acting by Jack Nicholson. Especially in the courtroom. Tom Cruise manages to pull it off as well as a lawyer. Demi Moore comes across as snooty at first, however the rest of the team appear to mellow her personality. Therefore a great team is formed. A very gripping film, which comes together at a great easy to follow pace.
Read more
3 people found this helpful
Report abuse

Galada
3.0 out of 5 stars A tense and entirely credible thriller
Reviewed in the United Kingdom on July 11, 2019
Verified Purchase
The theme (vicious bullying in the Marines) is distasteful and I thought I'd hate this film. But the acting is first-rate, the plot is both surprising and credible and one feels at the end that in some sense justice has been done. A strong screenplay. One feels that the atmosphere is utterly authentic and the psychology in the behaviour of the characters is penetrating. Remarkable to make such a viewable film out of such repulsive material.
Read more
Report abuse

Nigel R.
5.0 out of 5 stars A timeless classic
Reviewed in the United Kingdom on January 18, 2020
Verified Purchase
I would highly recommend this movie to anyone that appreciates film making at its very best.
With a distinguished cast in very believable roles, its joy to watch now, as it was on its release back in 1992, in a word - superb
Read more
Report abuse
See all reviews

Page 1 of 1 Start overPage 1 of 1
This shopping feature will continue to load items when the Enter key is pressed. In order to navigate out of this carousel please use your heading shortcut key to navigate to the next or previous heading.
Back
Next
Pages with related products. See and discover other items: Explore goods for nothing