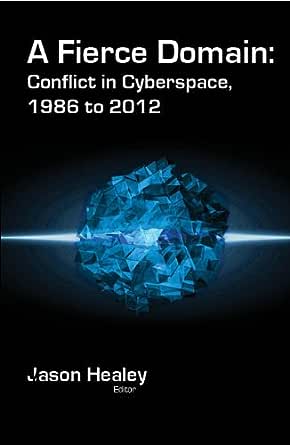 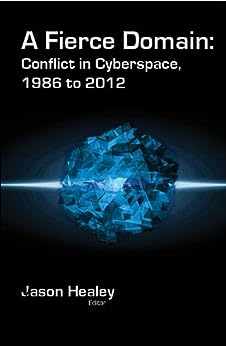 A Fierce Domain: Conflict in Cyberspace 1986 to 2012 Kindle Edition

Jason Healey is the director of the Cyber Statecraft Initiative of the Atlantic Council, focusing on international cooperation, competition and conflict in cyberspace. He edited the first-ever history of cyber conflict, A Fierce Domain: Cyber Conflict, 1986 to 2012 and co-authored the book Cyber Security Policy Guidebook by Wiley.

His ideas on cyber topics have been widely published in over a hundred articles and essays published by the Atlantic Council, National Research Council; academic journals such as from Brown and Georgetown Universities; the Aspen Strategy Group and other think tanks.  Jason is also a board member (and former executive director) of the Cyber Conflict Studies Association and lecturer in cyber policy at Georgetown University.

Jason has unique experience working issues of cyber conflict and security spanning fifteen years across the public and private sectors.  As Director for Cyber Infrastructure Protection at the White House from 2003 to 2005, he helped advise the President and coordinated US efforts to secure US cyberspace and critical infrastructure. He has worked twice for Goldman Sachs, first to anchor their team for responding to cyber attacks and later, as an executive director in Hong Kong to manage Asia-wide business continuity and create the bank's regional crisis management capabilities to respond to earthquakes, tsunamis, or terrorist attacks.  Immediately after the 9/11 attacks, his efforts as vice chairman of the Financial Services Information Sharing and Analysis Center created bonds between the finance sector and government that remain strong today. --This text refers to the hardcover edition.

"Conflict in cyberspace, as it turns out, is far more like conflict in the 'real' world than we've been told.  If you're a diplomat, general, or elected official that cares about the implications of cyber warfare, be sure to read this book."
President Toomas Ilves of Estonia

"I've often complained that ... the biggest impediment to effective cyber defense in the United States was our failure to settle on the 'big ideas'--those macro-thoughts of law, policy and doctrine that should guide our cyber behavior.  A Fierce Domain takes a giant step to meet this need by carefully (and entertainingly) laying out where we have already been on this journey.  It turns out that we have a cyber history, after all, a history we can now put to work to guide our thinking and our future actions."
General Michael Hayden, Former NSA and CIA Director

"Don't think of A Fierce Domain as the first history book on cyber conflict, but as a practical guide to the policy questions that need to be answered to really address cyber security - not just in the U.S. but the world."
Jeff Moss, Founder of Black Hat and DEFCON security conferences

"This is an important book. I have not seen anything this thorough about the history, and without history we are poorly equipped to understand the future. In addition, the cases well support the three main conclusions: change is gradual enough for us to learn from the past; we have spent too much attention on cyber attack rather than exploitation; and we should beware of the popular myths about 'cyber wars' that obscure clear thinking about policy."
Joe Nye, Harvard University Distinguished Service Professor and Former Dean, Harvard Kennedy School

Few of the conflicts in A Fierce Domain "is a household name, though from the gripping accounts in Mr Healey's book many readers will feel they all should be ... Mr Healey's main message is to urge policymakers to be less secretive and more humble. Too many past attacks remain classified. Officials continue to burble the same warnings and assurances as they did 20 years ago; the public is left in the dark."
Review in The Economist, "Digital Doomsters," 29 June 2013
--This text refers to the hardcover edition.

4.1 out of 5 stars
4.1 out of 5
27 global ratings
How are ratings calculated?
To calculate the overall star rating and percentage breakdown by star, we don’t use a simple average. Instead, our system considers things like how recent a review is and if the reviewer bought the item on Amazon. It also analyzes reviews to verify trustworthiness.
Top reviews

Tiny
5.0 out of 5 stars One of the first modern cyber histories
Reviewed in the United States on January 8, 2020
Verified Purchase
Haley, and the Atlantic Council, do an excellent job finding appropriate pieces to summarize cyberwar between roughly Moonlight Maze (1995) and the first 2008 APT trends. Right now, there are a lot of different documents claiming to be complete cyber histories. This is a good place to start.
Read more
Helpful
Report abuse

Defenestrator
4.0 out of 5 stars Insightful history that ties decades of stories together
Reviewed in the United States on April 4, 2016
Verified Purchase
Excellent history of the evolution of cyber security. Strong themes tying the case studies together. A bit choppy, because as an edited book there is some overlap between individual authors, but the bottom line is that this is book does a great job of introducing us to cyber security from a historical/practitioners perspective. You may be shocked to learn just how slow our security institutions have been to learn the lessons of history.
Read more
Helpful
Report abuse

Rex
5.0 out of 5 stars Excellent and Much Needed Book
Reviewed in the United States on April 22, 2014
Verified Purchase
Healey does something much needed in this domain and presents a brief history of cyber conflict over the last 25 years and traces some of the major policy and organizational changes that occured as a result of specific events and cyber attacks. A must read for any serious operater in cyber operations.
Read more
One person found this helpful
Helpful
Report abuse

Fernando Medina
4.0 out of 5 stars An eye opener
Reviewed in Mexico on February 3, 2017
Verified Purchase
This book is very good, it's about a subject gaining importance every day, and it truly gives you a place to start
Read more
Report abuse

Salvador
5.0 out of 5 stars Very useful for policymakers
Reviewed in Spain on September 29, 2013
Verified Purchase
Deep cyber-awareness for those who are directly involved in cyber issues. History teach us many lessons and essentialy we face the same problems.
Read more
Report abuse
See all reviews