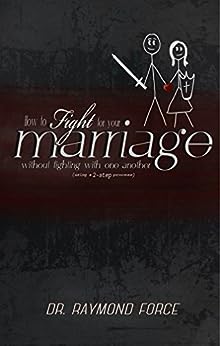 How to Fight for Your Marriage Without Fighting with One Another: Using a 2-Step Process Kindle Edition

4.7 out of 5 stars
4.7 out of 5
76 global ratings
How are ratings calculated?
To calculate the overall star rating and percentage breakdown by star, we don’t use a simple average. Instead, our system considers things like how recent a review is and if the reviewer bought the item on Amazon. It also analyzes reviews to verify trustworthiness.

krist
4.0 out of 5 stars Good tool for couples to connect.
Reviewed in the United States on December 11, 2016
Verified Purchase
Provides a great conduit for intimate conversation for couples. It does tend to get a preachy at times, but I love the illustrations used to describe some of the common issues facing married couples and some really good solutions to help overcome them.

My wife and I have gotten a lot out of reading this book together (we did one chapter a week, sometimes two as the chapters are very short, and discussed them at our date night) and it has really helped us connect and understand each others issues at a much deeper level.
Read more
4 people found this helpful
Helpful
Report abuse

Amazon Customer
5.0 out of 5 stars Practical and insightful
Reviewed in the United States on November 26, 2016
Verified Purchase
I liked the way this book clearly explains how couples in typically troubled marriages get to that place to begin with. One of the things I liked best and found most helpful was a clear outlining and explanation of the roles/responsibilities/needs men and women have in marriage, how they typically view marriage and how they will behave when the bond of trust and unity has been broken. It was very validating and affirming. Moving onward, this book minces no words on what must take place to rebuild the bridges, always with good explanations as to why. It gives step by step practical application, guidelines, with solid biblical support for those instructions.
This book acknowledges there are circumstances in marriage that are outside the focus and intent of this book: abuse, addiction, and adultery. A different approach is required for dealing with these problems. This is not the book for dealing with those kinds of marital issues, though some parts of it may still be helpful as an adjunct. I would strongly recommend a counselor for dealing with those kinds of issues.
This is an excellent book for Christians dealing with typical marital struggles in a godly way, before significant damage is done. Though I think, with God's help, it could be effective for a couple in serious trouble who both desire to save their marriage. It's a great read for wife or husband, but a better, more effective read if BOTH read it.
I gave it 5 stars because it is straight forward, easy to read and understand, very insightful and helpful for a Christian who is even just leaning toward fighting for their marriage but doesn't know where or how to begin. It may also help a wife/husband "on the fence" make a decision to commit to working at the marriage. Many, many thought provoking questions at end of each chapter to help bring clarity, and develop a plan.
Read more
11 people found this helpful
Helpful
Report abuse

sylvercloud
5.0 out of 5 stars I wish I had written this book!!
Reviewed in the United States on September 26, 2016
Verified Purchase
Dr. Force wrote as though he had been talking to me!! Out of my head, he opened the door of issues my husband and I have been dealing with even after 36 yrs of marriage! If I had had the answers he gave all my questions before, I would have written this book! But now, I have found personal peace and determination to fight FOR my marriage not WITH my husband! His Biblical instructions are simple, yet challenging and address the heart of all marriages. Definitely a book I will share time and again!
Read more
2 people found this helpful
Helpful
Report abuse

Bill VonRader
5.0 out of 5 stars Very good book
Reviewed in the United States on April 8, 2017
Verified Purchase
This book is a very good book for anyone wanting to better themselves in their marriage. And if both husband and wife read and implement its teaching, their marriage can only be better. Just read through it once and haven't gone through the chapter's exercises yet. But already I have been able to implement some of it making a project day WAY less stressful and actually a really good day. The little things make a big difference!
Read more
One person found this helpful
Helpful
Report abuse

Fascinating Woman
5.0 out of 5 stars Refreshing Perspective
Reviewed in the United States on August 8, 2019
Verified Purchase
Love this guy! My husband and I made it through half of the first chapter. But I read a couple chapters ahead while he was on vacation without me. So every chapter is full of Scripture and has thought provoking questions.
Read more
Helpful
Report abuse

Sheri Gee
5.0 out of 5 stars Absolutely loved this book!
Reviewed in the United States on March 2, 2017
Verified Purchase
I've read other books on marriage and they all address the issues the same. This book was more practical than the others, it helped me focus on how I can change myself and my role in the marriage. It inspired me to refocus my thoughts and gave me strength to keep trying.
Read more
2 people found this helpful
Helpful
Report abuse

Ben Throckmorton
5.0 out of 5 stars Good read even for good marriages
Reviewed in the United States on December 2, 2016
Verified Purchase
In searching for ways to be a more Godly husband I came across this book. I think this is a great read for couples even if they feel they have a great marriage and for those of us that know we have room for improvement there are many great points at serving our spouse in a more Godly manner. I know that this is a book I will revisit from time to time.
Read more
Helpful
Report abuse
See all reviews