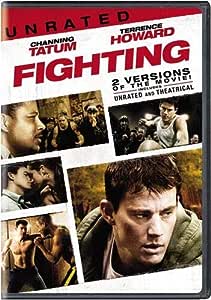 Small-town boy Shawn MacArthur (Channing Tatum, G.I. Joe: The Rise of Cobra, Public Enemies) knows firsthand that every day in New York City is a struggle to survive. So when scam artist Harvey Boarden (Terrence Howard, Iron Man, Hustle and Flow) gives him a chance to be something more in the brutal underground world of bare-knuckle street-fighting, Shawn decides that he has something worth fighting for and puts everything on the line to win. Every knockout brings him closer to the life he’s always wanted, but also traps him in a dangerous web he can’t escape.

The last thing you might expect from a movie called Fighting is excellent acting, but that’s what you’ll get. A scam artist named Harvey (Terrence Howard) sees a young would-be hustler named Shawn (Channing Tatum, Step Up, Stop-Loss) in a street scuffle and lures him into a no-rules fighting circuit. Shawn’s relentless drive to win leads him to unexpected success, but when he gets put into a big fight with a professional boxer, Harvey asks Shawn to take a dive. The plot sounds like a thousand boxing movies, but the difference is all in the texture. Fighting takes place in a very real New York City, with cramped, make-shift apartments, cluttered streets, and seedy nightclubs. Scenes get knocked sideways by odd bits of life and character quirks that feel organic, not shoehorned in by some clever screenwriter. There’s a marvelous scene where Shawn is trying to woo the Puerto Rican waitress he’s smitten with (Zulay Henao, Feel the Noise), but they keep getting interrupted by her suspicious mother--which sounds like a rom-com cliche, but is completely transformed by the wonderfully human interplay among the actors. Howard has always had a magnetic talent, but Tatum reveals an engaging vulnerability that contrasts nicely with his big-slab-of-beefcake look. The movie hearkens back to 1970s classics like Midnight Cowboy and Dog Day Afternoon, and though it doesn’t achieve the same emotional heights, it’s reaching in the right direction. Writer/director Dito Montiel (whose previous film, A Guide to Recognizing Your Saints, also featured Tatum) promises to make some truly memorable movies. --Bret Fetzer
Stills from Fighting (Click for larger image)

4.6 out of 5 stars
4.6 out of 5
339 global ratings
How are ratings calculated?
To calculate the overall star rating and percentage breakdown by star, we don’t use a simple average. Instead, our system considers things like how recent a review is and if the reviewer bought the item on Amazon. It also analyzes reviews to verify trustworthiness.

Jackjeanh
4.0 out of 5 stars Worth It
Reviewed in the United States on July 29, 2015
Verified Purchase
To be honest, wasn't sure I was going to like this movie. This was Channing Tatum right before he found success and the underdog story in the movie resounds soundly. He does a very good job, not only acting but in fighting as well. My only issue with this movie is ****WHOOPS, SPOILERS AHEAD**** the main or most important fight between Channing Tatum and his "enemy" seems a little outmatched. Played by Brian White, he outweighs Tatum by a good pound or two and, although not impossible, Tatum coming out on top seems a little far-fetched. But hey, what are movies for? Either way, I enjoyed it. Worth a look, I think. Side-note: I...love...Terrence...Howard...Seriously, he's amazing in just about anything he does.
Read more
One person found this helpful
Helpful
Comment Report abuse

Thieving Raccoon of the Cooper Clan
4.0 out of 5 stars Really good., but unrated doesn't help it.
Reviewed in the United States on November 16, 2010
Verified Purchase
This movie's story is a little confusing at first, but as you watch it through you will be like oh...so thats why hes fighting. I have to note out of nowhere Harvey says "Do you like to fight?" Ok just a little bit like other people say this movie's title seems like it replaced another one. In the story with the character Zulay, Shawn apparently kept his head that direction until he finds out a little secret. I really thought he would see her again. The unrated version now only adds an extra 3 minutes to the movie. I didn't see much new things to it. Instead I thought it should be called the extended version not unrated. There were 5 fights including the little intro. Like I said there could be more fighting to earn that title. Now let me say the acting is great. I really like Terrence Howard being in the film. He plays a great role as a scam artist. Channing and Zulay also have good roles. The comedy mostly came from some of Harvey's friends and Zulay's mom, or grandma I think it is. The soundtrack also kept me interested into it and even though I have a weird feeling like something is missing I really do think its an awesome movie. It kinda reminds of movies like 8 mile, you got serve, and stomp the yard (I really don't know why). There should be a sequel and with more fighting.
Read more
3 people found this helpful
Helpful
Comment Report abuse

Dolce Soie
5.0 out of 5 stars Fighting DVD
Reviewed in the United States on August 6, 2012
Verified Purchase
Never thought a movie about bare knuckle fighting would hold my attention, but it did. The casting I felt was very well done. Everyone was very believable in their roll, even those individuals I was unfamiliar with. I found myself actually caring about these characters, and could very easily identify with their struggles to make a living...doing what you have to, but may not really want to in a city that thrives on money. I grew up in New York and receognized many of the street scenes that are so typical of the city. The Bronx scenes were a flash back to my childhood. Raw and hard core, you have to live there to understand the mind set of the inhabitants. This movie captured the culture and the sub-culture of hustling. I enjoyed this movie very much!
Read more
3 people found this helpful
Helpful
Comment Report abuse

Smart buyer
3.0 out of 5 stars Action movie called Fighting
Reviewed in the United States on October 19, 2019
Verified Purchase
It's mostly an action movie Its possible I had seen the movie fighting before and I went to Amazon and purchased a copy.
Amazon.
Snappy. 🙂🙂🙂
Read more
Helpful
Comment Report abuse

J. Yee
3.0 out of 5 stars It Tries Hard
Reviewed in the United States on February 13, 2010
Verified Purchase
This is generally not my kind of movie, but I did like it as it had kind of a Rocky element going. I also thought the actors gave sincere performances and the story was gritty enough to keep your attention - I get bored easily. As I watched it, I really felt this movie had a lot of potential to be great but because it was kind of rushed, it couldn't quite get there. If it could have taken a little more time to develop the characters and their relationships, it might have gotten there. I know that Channing Tatum is always criticized for his non acting ability, but if you really watch this movie, you can sense his potential, there were several times that you got a sincere sense from him that his character really wanted to do the right thing and Tatum does this more with expression than words. The only other thing that I feel could have been better was the connection between Shawn and Zulay, I just didn't get a sense of actual attraction, it really seemed kind of forced, like there was no choice. Obviously not one of the best movies of 2009 but certainly one of the better ones. I hope you enjoy it.
Read more
11 people found this helpful
Helpful
Comment Report abuse

lolo
4.0 out of 5 stars Fighting
Reviewed in the United States on April 29, 2014
Verified Purchase
I love a good fight movie and this one fits that bill. Channing is quite the fighter and being a dancer, he could really showcase the movement and intent.
Terrance Howard is great as the guy who has his own story and knows talent when he sees and knows how to play the game with big gamblers.
So far my favorite Channing Tatum movie.
Enjoy!
Read more
One person found this helpful
Helpful
Comment Report abuse

Curious Reader
4.0 out of 5 stars The good guy wins
Reviewed in the United States on February 17, 2013
Verified Purchase
The whole plot is to follow the perceived manipulations of a young man, desperate to do more with his life, so he fights for money. His handler is slick and seemingly nothing but greedy, but shows a caring spot for his "mark", the fighter. But, in the end, the young man everyone thought was being used cause he was inept, came out the winner and achieved what he wanted - a better life without the violence.
Read more
One person found this helpful
Helpful
Comment Report abuse
See all reviews

Beacon97
4.0 out of 5 stars Gritty Drama (not Beat 'Em Up)
Reviewed in the United Kingdom on May 4, 2013
Verified Purchase
Can't quite figure out why I like this film. I resisted watching it for ages due to the title. But when I did finally watch it I was surprised how little of the film is actually about the actual fighting. And it's not a tournament movie either. Instead you are given a drama about people struggling to make a living, friendships and relationships, and the fighting is just a small part of it. It's not pretty either. These are not spectacular fights. They are back alley punch ups. You won't come away wanting to perfect the crane kick, because there is no crane kick or equivalent. It's a surprising film in its ordinariness, and that's its true strength. Give it a watch.
Read more
6 people found this helpful
Report abuse

Broken Holmes
3.0 out of 5 stars More of a relationship drama than a fight film. The cast do their best, but the style feels a bit dated and lacks drive.
Reviewed in the United Kingdom on December 14, 2017
Verified Purchase
A bit bland.
Read more
Report abuse