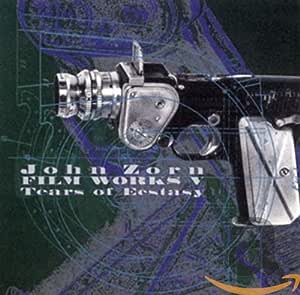 Share
Listen Now
Go Unlimited
Try now
Your Amazon Music account is currently associated with a different marketplace. To enjoy Prime Music, go to Your Music Library and transfer your account to Amazon.com (US).
Have one to sell? Sell on Amazon

When John Zorn was approached to produce a soundtrack for Japanese filmmaker Hiroyuki Oki's Tears of Ecstasy, he was given only one requirement: the music had to be divided into 60 one-minute segments. As for style and substance, Zorn and company, including Robert Quine and Marc Ribot on guitars and Cyro Baptista on percussion, were allowed to experiment without limitation. The resulting stroboscopic soundtrack rips through a multitude of genres. Sleek jazz and lonesome Western instrumentals butt up against trash-compactor noise that in turn sits adjacent to the nocturnal clicking of robotic crickets. This pastiche of mutated melodies becomes a flawless example of premeditated musical surgery operating out of control. --Michael Woodring

Michael Stack
VINE VOICE
3.0 out of 5 stars Naked City-lite.
Reviewed in the United States on December 19, 2005
One of the most varied soundtracks in John Zorn's "Filmworks" series, "Filmworks V: Tears of Ecstacy" was recorded for a Japanese movie that seemed to be concerned with conceptual filmmaking-- the movie consisted of roughly sixty one minute sections for which Zorn was asked to provide music for in a rather limited timeframe. Zorn (performing on alto sax, prepared piano and samples) is joined by Marc Ribot (guitar), Robert Quine (guitar) and Cyro Baptista (percussion) and for each of the one minute or so tracks (there's 48 of them on the disc), different genres or genre alloys are explored.

So what separates this from Naked City? It's not as carefully planned, that's clear. The music itself is a lot of fun, everything from smokey blues ("Youden Square") to blasts of metal noise ("Cusp") and in between are covered, but it's all quite loose. It's clear it was put together in a hurry, and while the pieces are fun and effective, they by-and-large lack the depth that the Naked City pieces have.

Nonetheless, it's a decent record. If you're really craving more Naked City, this might be a good coda, and if you're into Zorn's film composition, this is a worthwhile endeavor, but by-and-large it's less essential then many other soundtrack pieces.

Allan MacInnis
5.0 out of 5 stars More fun than a barrel of... what?
Reviewed in the United States on February 25, 2001
There's an incredible number of cuts on this disc. Almost all run around a minute long, and feature some of the finest of Zorn's longtime collaborators making very strange, very playful sounds with him in the studio -- experimenting, bringing in unusual instruments, making noise, making music. It's incredibly varied and delightful stuff; the film it's a soundtrack for is apparently a Japanese porno about extraterrestrials with a sexual fetish I won't detail here (since my previous review of this disc seems not to have made it past the editors). I suspect everyone involved had a hoot making it, and it certainly transfers onto the listener: this album is A LOT of fun, and my favorite FILMWORKS release.
Read more
One person found this helpful
Helpful
Comment Report abuse
See all reviews from the United States

See all reviews from the United States
Pages with related products. See and discover other items: john zorn