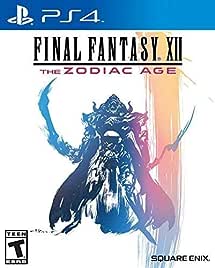 Return to the World of Ivalice

Enter an era of war within the world of Ivalice. The small kingdom of Dalmasca, conquered by the Archadian Empire, is left in ruin and uncertainty. In a fight for freedom and fallen royalty, join these unlikely allies and their companions as they embark on a heroic adventure to free their homeland.

Take on monsters and enemies in up to 100 consecutive battles and continue your adventure with the addition of the New Game+ Mode.

Enter an era of war within the world of Ivalice. The small kingdom of Dalmasca, conquered by the Archadian Empire, is left in ruin and uncertainty. Princess Ashe, the one and only heir to the throne, devotes herself to the resistance to liberate her country. Vaan, a young man who lost his family in the war, dreams of flying freely in the skies. In a fight for freedom and fallen royalty, join these unlikely allies and their companions as they embark on a heroic adventure to free their homeland. FINAL FANTASY XII THE ZODIAC AGE improves upon the 2006 classic FINAL FANTASY XII, now more beautiful and easier to play than ever. The high-definition remaster introduces several modern advancements, including reconstructed battle design and a revamped job system. With newly implemented trophies and share functions, as well as stark visual and sound improvements in true HD for the first time, players both returning and new to the game will experience a grand adventure that spans the world of Ivalice in an entirely fresh and improved way.

4.8 out of 5 stars
4.8 out of 5
1,207 global ratings
How are ratings calculated?
To calculate the overall star rating and percentage breakdown by star, we don’t use a simple average. Instead, our system considers things like how recent a review is and if the reviewer bought the item on Amazon. It also analyzes reviews to verify trustworthiness.

Andrew S. Reed
5.0 out of 5 stars The best 3D Final Fantasy made better.
Reviewed in the United States on July 24, 2017
Platform: PlayStation 4Edition: StandardVerified Purchase
Final Fantasy XII has always been an under appreciated classic, largely because it was an odd animal that was originally released towards the end of the great JRPG boom. Now that things have quieted down in JRPGs considerably this lovingly crafted classic has it's chance to shine brighter than ever. I'm sure a lot of work was done under the hood to get this remaster looking up to par for the PS4 but the original looked great and the biggest graphical changes apart from a resolution boost and enhanced widescreen are small fixes like removing Vaan's weird abs.

Now, maybe you've played FFXII before and you're wondering "what's new for me here", the answer is that the majority of the changes are subtle and while it's more of a matter of remixing than anything it makes a world of difference. They've removed the original license grid and replaced it with 12 job based grids which force you to make hard and meaningful choices. No more can your characters all be shiny golden gods capable of doing everything at once, now you'll have to adopt new strategies, use new equipment you may have previously ignored, and choose your jobs carefully to maximize your characters abilities. Also there's a trial mode which offers wonderful new challenges and opens up brand new possibilities for breaking the game early on

I can't recommend this game highly enough, particularly in this shiny new remaster. Yasumi Matsuno is a man with a love for deep RPG systems and complex political plots. Most would argue Final Fantasy Tactics is his masterpiece but I think there's a case to be made for Final Fantasy XII. The number of side quests and little interactions most people will miss are kind of astounding and make me long for the long gone days of obsessively crafted RPGs made by and for crazy people.

Kyle
4.0 out of 5 stars Don't get me wrong - I love this game, but...
Reviewed in the United States on January 3, 2018
Platform: PlayStation 4Edition: StandardVerified Purchase
I absolutely love this game. It's magnificent. It's a masterpiece. This version is no different, plus it introduces the Zodiac system which, for better or worse, forces you to diversify your units rather than make them all eventual jacks of all trades. The gameplay is great, there's plenty to do, and it ranks up there with some of the best Final Fantasy games of all time.

THAT SAID, this feels like a slightly lazy update. The graphical upscaling is nice, but it's just that, a direct upscale of models. Textures, as far as I can tell, haven't been touched, so the fine details in all of the models are pretty meh, as they've been simply run through some sort of upscaling algorithm that makes a lot of the larger textures look like they're being viewed through a stained glass window. I'll give points to Square for redoing the UI completely though - it looks very nice on an HD screen. That said, the graphical fidelity found in the actual gameplay could be reached (maybe even surpassed) with a capable enough computer and an emulator, so it's a bit disappointing.

Movie scenes look good enough. I'm not sure how they've been remastered, but they're presented in ultrawide and get the job done.

Audio has been remastered in 7.1. I haven't compared the original vs remake side by side, but the remake sounds great - especially the orchestral tracks.

In a world of loving remakes, where everything, from top to bottom, is completely reworked, the Zodiac Age remake stands out as passable, but not phenomenal. The audio, UI, and gameplay changes are certainly welcome, but the fact they put so little work in updating textures in a game that retails at about half the price of a new game is a tiny bit disappointing.

I'd rate it a 4.5 if I had the ability to rate half stars, considering the gameplay is still excellent.

Arielle-Autumn Stott
5.0 out of 5 stars Oh great Gods I love this speed up option!!!!!
Reviewed in the United States on January 12, 2019
Platform: PlayStation 4Edition: StandardVerified Purchase
Final Fantasy 12 has been one of my favorite games for years. I got it brand new for the PlayStation 2 back in 2006 and I have put in well over 900 hours into the game over the years. I still play on the PS2 version, and I wanted to try out the remaster of this game since I had heard really good things about it. And I must say that I love this game, but oh do I love the 4x speed option. It makes the grinding and the farming of items and weapons in the first few hours of the game SOOOOOOOO much easier. I love being OP as F***, because I did struggle the first 2-3 times I played this game, and as such, I can spend just a few hours chaining Dustia in the Westersand to raise my level by 30 before I even get a second character.
Having the option to get the voices in the original Japanese as well makes it much easier to actually get back into the storyline as well. I don't know why, but the 3 most prevalent characters, (namely Vaan, Penelo, and Ashe), their voice acting at the beginning of the game makes my ears bleed. I still love the characters and the storyline, it's just those characters voices that annoy me. Being able to turn off the subtitles allows me to practice my Japanese, and being able to change the other options, such as battle speed, on the fly makes this game fresh again. I'm loving the game and I really hope more people get into this game. Be it a revisit to an old friend or a new adventure I wish all players luck.
Read more
6 people found this helpful
Helpful
Comment Report abuse
See all reviews

Page 1 of 1 Start overPage 1 of 1
This shopping feature will continue to load items when the Enter key is pressed. In order to navigate out of this carousel please use your heading shortcut key to navigate to the next or previous heading.
Back
Next
Pages with related products. See and discover other items: video production job, crash bandicoot, ps4 remastered games, square enix rpg, final fantasy xii products, final fantasy iv video games