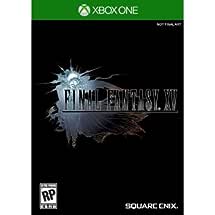 As the Crown Prince Noctis and his three best friends set out on a journey to wed his fiancée Luna, a terrible tragedy befalls his country. Under the guise of peace, the neighboring Niflheim Empire invades the kingdom of Lucis, severing his connection to his father King Regis and Luna.

The Final Fantasy XV Season PASS gives you access to three original episodes and an online co-op multiplayer mode. Gladio, Ignis and Prompto will become playable characters for the first time ever and a new play mode for up to 4 players will be added to the game.

Get ready to be at the centre of the ultimate fantasy adventure. Enter the world of FINAL FANTASY XV, and experience epic action-packed battles along your journey of discovery. You are Noctis, the Crown Prince of the Kingdom of Lucis, and your quest is to reclaim your homeland from the clutches of the imperial army. Joined by your closest friends, you will take the wheel and experience a voyage like no other, travelling through the breath-taking world of Eos encountering larger-than-life beasts and unforgiving enemies. You will learn to master the skills of weaponry and magic, channelling the power of your ancestors allowing you to effortlessly warp through the air in thrilling combat. Fresh faces and long-time fans, fulfil your destiny and experience a brand new kind of fantasy.

4.6 out of 5 stars
4.6 out of 5
651 global ratings
How are ratings calculated?
To calculate the overall star rating and percentage breakdown by star, we don’t use a simple average. Instead, our system considers things like how recent a review is and if the reviewer bought the item on Amazon. It also analyzes reviews to verify trustworthiness.

Blake G.
5.0 out of 5 stars A Modern Marvel of Gaming 5/5
Reviewed in the United States on November 30, 2016
Platform: Xbox OneEdition: Day OneVerified Purchase
Having not touched a FF game since FF-X (Since all the ones after that got destroyed in reviews, didn't waste my time/money...figured I'd leave the series on a high note), I was super apprehensive about jumping into this one, even though the preview content looked promising. Take into account the negative reviews from people such as "It looks like PS2 graphics" or "this absolutely awful"; didn't help make it easier. I bit the bullet, pre-ordered, got it on release day, and sat down to play it.

DOWNLOAD/INSTALL
The download/install took a while (51GB; 41GB on Disc, 10GB over network) but not as bad as something like GTA-V. Once downloaded it still had to install. It let me start the game at ~50% installed, and never had a problem after that.

COMBAT
Once installed, I started my adventure. The combat was a LITTLE hard to get used to for the first 5-10 minutes (I Highly recommend doing the 5-10 minute tutorial in the beginning, makes the start of the game go much smoother) as the controls aren't super "common" for combat games, but before I knew it, I wasn't even thinking about it anymore, and was pulling off nasty full-team combos on mobs and rares/bosses.

STORY
The story seems a little "off" to start with, but after about 1-2 hours it gets back on the rails and I found myself fully invested, and making conspiracies of my own on who's doing what and where and why...etc. I am excited to see where the story takes me next!

GRAPHICS
Ok, I'll start by saying, I'm playing on an XBOX One-S, on a 70" 4K TV. This game is beyond gorgeous. The cutscenes alone had me like "Holy sh*t, this is where we are with technology now?" Every little detail in the world is built with TLC, and it shows (Even the burn pattern on a piece of toast...seriously). I'm blown away. Whoever said this looks like PS2 graphics needs to go see an Optometrist and get their eyes checked and stop playing on a 90's Tube TV.

OVERALL 5/5
I'm about 9 hours in, and I'm enjoying every minute of it. If you're feeling on the fence about this, I hope my review has helped shine some light for you on this wonderful game and put to bed any doubts you may have. If it wasn't for me being at work today, I 100% would be hunkered down at home playing till I couldn't keep my eyes open anymore.

oranjekola
5.0 out of 5 stars Great Game
Reviewed in the United States on May 22, 2018
Platform: Xbox OneEdition: Day OneVerified Purchase
Now, I know there is a large portion of my fellow JRPG friends that had a lot of rather unsavory things to say about this game. For the franchise not continuing on the turn based style for one. But, I personally enjoyed the real time combat in this game, the warp attacks and the chain links. Nothing so complicated it distracted from making it enjoyable. The scenery is absoloutly stunning in every part of the map. Though I have played this on ps4 and Xbox the differences between the two are minute.
The added vehicle, something not used in the franchise before with a plethora of customizations.
A multitude of side quest and monster hunts.
Characters that are charming and personable.(if a game Charchter can be such)
Hidden dungeons throught the map.
Expansive DLC so any hardcore fans can continue to enjoy every morsel.
And the story line that is actually very touching and in depth.
Read more
5 people found this helpful
Helpful
Comment Report abuse

J. Jones
4.0 out of 5 stars A Final Fantasy "Old School" Fans Would Enjoy
Reviewed in the United States on February 3, 2017
Platform: Xbox OneEdition: Day OneVerified Purchase
This is a true next-gen Final Fantasy experience! I've grown with the series so nostalgia always affected my opinions of the most recent releases (i.e. FF XIII); however, this is the first FF since FF IX that I can't stop playing.

The combat is balanced in a way where it operates in Real-Time but has an option to give it that classic turn-based feel (Wait Mode). The environment is vast yet somewhat empty, the scenery is the most visually appealing in the entire franchise, and open exploration seems to be the best decision Square Enix made for this game.

My biggest complaint is the lack of strategy. The combat feels much like a button masher. Traditionally, FF has a clear separation between magic and physical combat. The magic is this game is very limited. VERY limited. To the point where they have simplified it to the three major elements, fire, blizzard, and lightning, standard in all FF games. Gone are the days of white and dark magic. Summons have also taken a significant hit; almost to the point of nonexistence. Also, as much as I appreciate the realism of using a magic spell in battle, having your allies receiving (sometimes significant) damage without any option to place them on the battle field, become very frustrating in big battles. I have gotten the mindset that magic is now an afterthought in battle, only used as a First Strike.

I'm finding the game enjoyable and hope to have more thoughts on this as I progress through the story. I have spent about 30 hours so far completing mostly side missions.
Read more
8 people found this helpful
Helpful
Comment Report abuse

Holly
4.0 out of 5 stars Take it Slow and enjoy the ride....
Reviewed in the United States on January 14, 2018
Platform: Xbox OneEdition: Day OneVerified Purchase
Another wonderful and visually stunning addition to the Final Fantasy series. Having played 7 through to present, I would rank this probably one of the top 6. In order, 8 9 7 12 15 and 10. The story can drag on and main story line can be short. However, if the player does all the side quests and downloads the seasons pass, you will an easy over 100 hours of fun. I highly suggest not playing the DLC's until after you finish the main quest because of spoilers. I also would advise watching Kingslave before playing the game. The movie shows event leading up to the game and the opening scene. It will help you better understand what is happening and why with a little background story. Plus it's an enjoyable watch. Take your time, don't rush the game. Enjoy the view and the bromance. Well worth the price. The only reason I can't give it a 5 star rating is because the main story line is incredibly short and it doesn't exactly meet Final Fantasy 7-9 standards. But I was certainly happy with the game and I think any rpg and/or FF player will be too.
Read more
5 people found this helpful
Helpful
Comment Report abuse
See all reviews