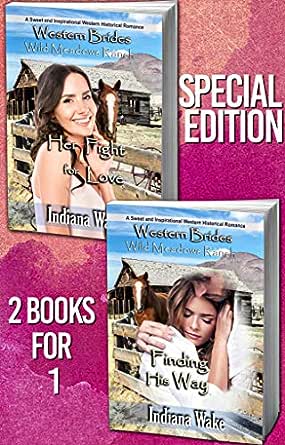 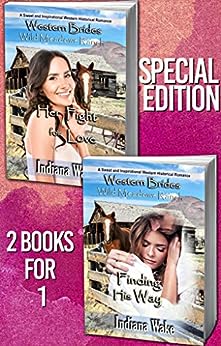 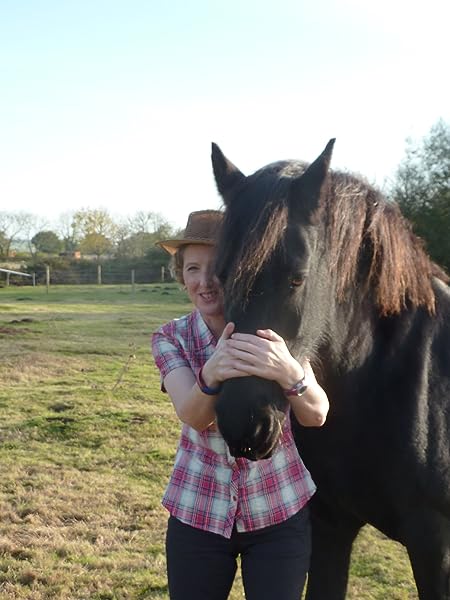 Judith Tulloch
5.0 out of 5 stars Two fantastic books well worth reading!!!
Reviewed in the United States on October 8, 2019
Book 1, Finding His Way is Joel Meadow’s story. Joel was 9 years old when his dad died of stress caused by Dale Clayton, an evil man. He and Rose Clayton were friends in school, until he came back to school after his father’s funeral and he stopped having anything to do with her. Joel had been her only friend. She was different from her family, whom she didn’t like and they didn’t like her. Because she was a Clayton, the town’s people weren’t nice to her either thinking she was like her family. Ten years later, Joel was riding in a meadow, his mind on something bothering him, when he was knocked of his horse by a branch he didn’t see. Rose was in the meadow reading a book and ran to see if he was ok. That’s when things between them changed. Joel was seeing her differently. The question was he loyal to his family or did he follow his heart?
Book 2, Her Fight for Love, is Cathy’s story. Her mom was pregnant with her when her dad died. She’s 18 years old now in her 2nd week working at the town newspaper. She was hired by the deputy editor, John Alexander, who gave her the job with a culinary column collecting hard time recipes, not the job as a reporter writing interesting stories of happenings around town as she wanted. She went to talk to Nelda Baines who had a book of hard time recipes. In talking with her she found out that her dad had owned Baines Animal Feed, who Dale Clayton bought from her father. Nelda had never told anyone before that her father refused Clayton’s offer to by his store. The second time he offered him a lot less for it. He refused again. That’s when Clayton told hum he’d tell everyone that her dad tried molesting his oldest daughter, Louisa. He believed he would and sold it. The town was afraid of Clayton. She new then she wanted to write a story about Clayton but knew John wouldn’t go for it. She started writing it anyway and managed to secretly talk to the new editor, Russell Tapper. She told him about her talk with Nelda and what she wanted to do, Being new there and from New York, he asked who the Clayton were. He said he wanted to make some discreet inquiries before he decided. The next day he let her no she could write it and it would be her story with her name on it if it went to print. He had two stipulations, first she was to keep the story to herself, telling no one. He didn’t want anyone slipping and Clayton finding out about it. Second, they would work together on it. He told her he had the responsibility to keep her safe. She got names and together they would interview them and hope the people would tell them what Clayton had done to get them to sell. The more they secretly worked on this together, the stronger the attraction to each other. Russell tried fighting it as he was 15 years older than her, he was her boss and had to be professional and he planned on going back to New York in a year. Besides why would a beautiful young woman want a pen older man like him. Would they get enough town’s people to give their story and would it go to print. Cathy wanted to get the truth out about the Claytons and get the town to stand shoulder to shoulder like they use to be before the Clayton’s came to town. Would they accomplish this and would Russell go back to New York? Both stories were well written and are well worth reading. I HIGHLY RECOMMEND yhis 2 book set. Both were fantastic reads! Some advice, when reading book 1, have tissues handy. Joel and Rose’s story caused this reader to have many tears.
I was given an advanced copy of this book set, I voluntarily wrote an honest review.
Read more
One person found this helpful
Helpful
Comment Report abuse

Karen Semones
5.0 out of 5 stars Excellent two-book set
Reviewed in the United States on October 7, 2019
I received an ARC of this book set from the author, Indiana Wake, and this is my voluntary and honest review. I loved this excellent two-book set which is the final two books of the Wild Meadows Ranch series. All five books in this series are must reads if you enjoy western romance with adventure. Each book is about the Meadows family with the Mother and Father and their best friend for starters The last four books are about each of the four children from oldest to youngest. All involved strong women characters. I highly recommend all the books in this series. I can't wait to read the next book this author puts out, because she is one of my favorites. Once I start reading one of her books, I have trouble putting that book down until I finish reading it.
Read more
2 people found this helpful
Helpful
Comment Report abuse

Normsie
5.0 out of 5 stars Fabulous ending to a Fabulous series
Reviewed in the United States on October 18, 2019
What a wonderful ending to the Wild Meadow's Ranch Series. In "Finding his way" Joel Meadow's son comes of age and shows his courage in following his dreams even with the possibility of family disapproval as he helps Rose overcome the reputation of her family and helping her to gain acceptance in the town of Grafton Crest as well as the Meadows family.
In "Her fight for love Cathy, the youngest child of the Meadows family shows her determination to follow her desire to become a newspaper reporter as she delves into the story of the family that has terrorized Grafton Crest for over 20 hears and writes a story that unites the town and rids it of an abusive family. This is a fabulous conclusion to the Wild Meadow's Ranch series. I received an ARC of this book set from the author, Indiana Wake, and this is my voluntary and honest review.
Read more
One person found this helpful
Helpful
Comment Report abuse

Mel Higgins
5.0 out of 5 stars Read all four books in the series!
Reviewed in the United States on October 10, 2019
I loved this four book series about the Meadows family. With a span of nearly twenty years, it was wonderful to follow the characters all the way from the first to the fourth book. The constant threat of the Clayton family added suspense to this saga. A great story of how right wins out in the end.
Read more
One person found this helpful
Helpful
Comment Report abuse

gary c lehn
5.0 out of 5 stars Great series......
Reviewed in the United States on October 15, 2019
I've sure enjoyed reading this series of stories, Wild Meadows. I find that he author is always writing a very entertaining and interesting story, the last story was a very special treat to read. I'm sorry that the Series ended, on to the next one!
Read more
One person found this helpful
Helpful
Comment Report abuse

Renee Lewis
5.0 out of 5 stars Fantastic End to the Series
Reviewed in the United States on October 9, 2019
The final two books of the series don't let you down. The strong woman of the west and the finding a mate lead to action reads. The author knows how to write a great story that is not boring.
Read more
One person found this helpful
Helpful
Comment Report abuse

GH
4.0 out of 5 stars Finding His Way & Her Fight for Love 2 Book Special Edition(Wild Meadow Ranch
Reviewed in the United States on October 14, 2019
A very good book with two stories and in finding his way Joel finds love and lives as a farmer and in her fight for Love Cathy fights for the town against the Claytons and finds love
Read more
Helpful
Comment Report abuse
See all reviews