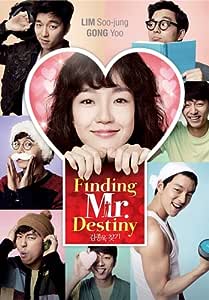 Looking for your long-lost first love? Call the First Love Agency! He's fussy, organized, and honest to a fault. When Gi-joon (GONG Yoo, Coffee Prince) is fired from his job, he opens the First Love Agency, a one-man organization dedicated to helping others find their long-lost first loves. She's independent and feisty. Stage director Ji-woo (LIM Soo-jung, I'm a Cyborg, But That's OK) is dragged to the First Love Agency by her father, who is convinced she won't get married because she isn't over the handsome stranger she met during a long-ago vacation in India. With a name and the dates of her trip as their only clues, can Gi-joon and Ji-woo work together to find her first love? Or will they discover that destiny has some surprises in store for them? Includes the feature film in Korean-language with newly-translated English subtitles and more than 30 minutes of video extras - all with on/off English subtitles!

D. Blackwell
4.0 out of 5 stars Four Stars because of Gong Yoo!
Reviewed in the United States on April 15, 2013
Verified Purchase
I watched this movie over the weekend and can only give it 4-stars because of the handsome and charming Gong Yoo. The plot of the movie was not very developed, and as such Gong Yoo and excellent job of holding movie together. The female lead was okay, at least she didn't whine like you often find in Korean Dramas, so that was nice. I'd recommend this movie only if you are a Gong Yoo fan!
Read more
One person found this helpful
Helpful
Comment Report abuse

Martha Ecklund
4.0 out of 5 stars : )
Reviewed in the United States on July 11, 2016
Verified Purchase
I liked it but the cover is deceptive.
Read more
One person found this helpful
Helpful
Comment Report abuse

Nancy Plagge
4.0 out of 5 stars How Often
Reviewed in the United States on March 17, 2014
Verified Purchase
do we look to the past when we think about who we love and who makes us happy. The journey of searching for your last, lost love, might bring you face to face with something new
Read more
One person found this helpful
Helpful
Comment Report abuse

kristina
5.0 out of 5 stars LOVED THIS!!
Reviewed in the United States on December 5, 2019
Verified Purchase
the story was sweet, with Gong yoo's character funny yet relatable. Very happy with this purchase. Delivered quickly!
Read more
Helpful
Comment Report abuse

buyer
5.0 out of 5 stars okay
Reviewed in Canada on July 6, 2019
Verified Purchase
Delivered on time and as described
Read more
Report abuse