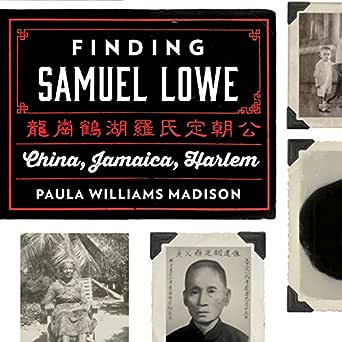 In the case at hand the author knew of her mother's Jamaican past and that she was part Chinese but any real knowledge of her maternal grandfather who bears the name in the title was piecemeal at best and a confounding mystery at worst. Suffice it to say that the author weaves a very readable account of how she went about her search, ladling in along the way some interesting factoids and history about the emigration of Chinese Hakkas to other lands during the late nineteenth and early twentieth century. Highly entrepreneurial and business savvy, Hakkas often became very successful merchants in foreign lands and such was the case for Samuel Lowe. The search for Samuel Lowe begins in Jamaica and from there moves to Shenzhen and Guangzhou in China, roughly the ancestral home of the Hakka's and the Lowe's.

There are many poignant moments in the book, starting with the author's upbringing in Harlem. Her mother could be the stuff of a novel. Her Jamaican antecedents the raw material for a doctoral dissertation in sociology. What really brings the story home is the author's almost aside that for most African Americans family genealogy that is truly traceable may date back three or four generations. By contrast, in China family lineage may go back hundreds of generations. By the author's calculation her Chinese family can count 159 generations or roughly a thousand years before the birth of Christ. It's mind boggling.

Finding Samuel Lowe is an easy read, being well organized and having a goodly mix of family story telling, history, sociology, mystery and intrigue. It takes a special person to pursue a family past shrouded deeply in vagueness. The author, though, is not just another ordinary person pursuing her roots. She brought to the search some real advantages including a mother that was relentless in the welfare and future success of her three children, a highly successful career in journalism and television, a husband that faithfully supported the near single-minded investigative work to locate the Chinese side of the family, and the Chinese family itself whose members embraced the author and her Jamaican and New York family from the get go. Think about that for a moment. A knock on the door (actually an email out of the blue) and then someone claiming to be your long lost relation that you didn't know you had in the first place. It is all these elements that keep you glued to the book's pages.

My only critical observation is that once Samuel Lowe (long deceased before his descendants were located by the author) and family are found and a rightful narrative about the Chinese family in the years from the 1930s (including some tough observations by the author of Mao's Cultural Revolution in the 1960s) is provided, the story starts to run out of steam as the author focuses on family reunions that just don't add to the story. Memoirs oftentimes evolve to the overly sentimental and while it's not excessive here it probably best could have been edited out.

M. Lucey Bowen
5.0 out of 5 stars Much More Than A Memoir
April 15, 2015
Format: HardcoverVerified Purchase
Paula Williams Madison has accomplished an extraordinary feat: in one book and a few short years, she has brought together the history of her family, the society that is Jamaica, the history of the Hakka people of China and her own evolving understanding of a globe crisscrossed long before our time. The intensity of her telling of the search for her mother's Chinese father and her honesty in describing the broken relations as well as the mended ones make this an important book for those who seek to know what intercultural, interracial understanding might look like.
Read more
11 people found this helpful
Helpful
Comment Report abuse

bells
5.0 out of 5 stars A timeless American story
May 12, 2015
Format: Kindle EditionVerified Purchase
This is a timeless story of loss, heartache, reunion, and joy.
In telling the story of her mother, Nell Lowe Williams, and her grandfather, Samuel Lowe, Paula Williams Madison also tells the tale of so many immigrant families who lose their connection with their homeland. The difference is that in this instance, the storyteller is also an extremely accomplished journalist and entrepreneur who doggedly sets out to find her Chinese roots, to delve deeper into her Jamaican roots, and to share the history that helped to shape her family's experiences.
This book is the incredible record of a woman who is 1/4 Chinese, 3/4 Jamaican and 100% American.
Read this; you will love it too.

Pauline V
5.0 out of 5 stars Interesting Documentary
October 5, 2019
Format: Kindle EditionVerified Purchase
I enjoyed reading this book and also watching the video. I did not want to put the book down until I was finished.
Paula Williams Madison took me on a journey from Harlem to Toronto, Jamaica and to China. I wanted to read more about Paula’s mother. It was great that Paula accomplished her goal of finding her Chinese family.
Read more
Helpful
Comment Report abuse

Victoria Romero
5.0 out of 5 stars Couldn't Put it Down
November 9, 2015
Format: HardcoverVerified Purchase
If you travel the Caribbean, you don't have to go far to see shops and stores owned by Asians. What few travelers realize is that certain groups like the Chinese have lived in the Caribbean for generations and had families that crossed ethnic boundaries.
This is the compelling, beautifully written journey of one African-Caribbean-American family to find their grandfather Samuel Lowe. Although they are too late to meet their grandfather, they are able to get to know him through their relatives in China who knew about them!
The book weaves the past with the present and touches on the future of the Lowe Clan.
Read more
3 people found this helpful
Helpful
Comment Report abuse

S. Kley
3.0 out of 5 stars A woman from Harlem finds her Chinese grandfather by way of Jamaica
December 30, 2018
Format: HardcoverVerified Purchase
This book was somewhat interesting, but very repetitive. I did not know of the connection between China and Jamaica. This book was a selection from Silicon Valley Reads 2019 along with two other books on the theme of family and heredity.
Read more
One person found this helpful
Helpful
Comment Report abuse

teach4u
5.0 out of 5 stars Finding Samuel Lowe
April 5, 2019
Format: HardcoverVerified Purchase
I was fortunate to meet the athor and get the book signed. The story piqued my interest in Chinese in Jamaica
Read more
Helpful
Comment Report abuse