You've subscribed to Felines of Furyne! We will preorder your items within 24 hours of when they become available. When new books are released, we'll charge your default payment method for the lowest price available during the pre-order period.
Update your device or payment method, cancel individual pre-orders or your subscription at
Your Memberships & Subscriptions
There was an error. We were unable to process your subscription due to an error. Please refresh and try again. 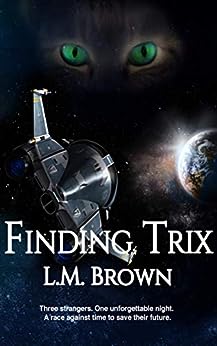 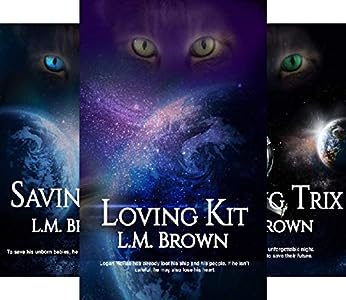 Sharita L
5.0 out of 5 stars Another winner from LM Brown
Reviewed in the United States on June 10, 2019
Verified Purchase
When I read Saving Jax, I liked it better than Loving Kit. Now, I'd say this is my favorite out of the bunch.

In this one, you had an unlikely menage between a feline, avian, and canine. Wow, talk about a mixed bag.

But their relationship ran deeper than the characters in the last two books. Traveling between worlds to find one another, bucking traditions in the name of love, and fighting blatant bigotry in the process.

This poor feline, Trix had so much to overcome and in the end, he got what he deserved.

What a book! The worldbuilding on this one was more intense than the last, without becoming over bearing. There were funny moments and sexy ones between the lovers, that made you feel like you were there with them. This one hit me a lot more emotionally, because Trix suffered through outright prejudice, but never wavered on what he needed to do for himself or his litter.

There was definitely more of a message to this one.

the eternal scribe
4.0 out of 5 stars I'm not a Homosexual Romance Reader, but I enjoyed this book...
Reviewed in the United States on June 16, 2019
Finding Trix was absolutely an enjoyable book, made even more surprising by the fact that it is not a category I usually read (or have ever read before). I have read MMF, but never any MM, MMM, or Mpreg, so this was definitely stepping outside what I would consider my comfort zone, but it was worth it. I found myself smiling at laughing at times during the book and thoroughly enjoyed the characters' development as events proceeded.

For the most part, the characters are fairly complex and I liked all three, though I did find Ferron to be problematic.

Trix has issues with his full name, which forms a fairly apt symbology for his feelings regarding his gender identity as well as issues in his family life. His emotional progression fits very well with hormonal and physical changes he goes through as the story develops.

Ferron shows a very clear character development, both psychologically and sexually, as the book progresses, though I did feel that it wasn't always consistent. He starts off very shy, but then with moments of mastery before he's really come into his own (which didn't really bother me because everyone can be like that when it's something they feel strongly about), but then he also had moments of almost dominance in situations where the author was trying to portray him as completely submissive, which struck me as wrong. Ferron serves this odd role, though, in the story. Submissive in some instances, dominant in others, he becomes the glue that keeps them together.

Delta is by far the most stable character, serving as a sort of anchor for the others. While there is emotional depth and he comes with his own sets of issues, he undergoes the least transformation of the three, which I think works very well in this story, adding to the symbolic anchor role he serves.

There is a certain amount of feminity displayed in box Trix and Ferron at times, which can give people not normally interested in MMM stories something to latch onto. But then the names for species and planets were often not very imaginative. This had the advantage that it was often very easy to visualize the characters, but I think it also drew the reader out of the story a bit. Then, for whatever reason, Trix's name just kept making me think of the bunny mascot from the breakfast cereal.

Then there was the personal pronouns for dual gender individuals who had not undergone puberty yet. This didn't show up until later in the story, but I just couldn't adjust to it. It was too hard to wrap my head around. I think the author would have been better served creating words that had very similar sounds to what we already say. I can see where the author might have tried to do that, but I feel like they failed. I kept wishing they wouldn't use them at all or maybe use what many non-binary or agender individuals use: they and them.

I also found some of the sex scenes, especially those involving Trix's female characteristics, problematic. I am by no means a homosexual male (obviously) and I understood that during certain parts of the book, both Delta and Ferron wanted to help Trix with his issues with his dual gender nature, but it often felt not quite right. It seemed perfectly normal to me that they might make a point of not avoiding his female parts to prove it didn't disgust them, but they sometimes did things that just felt TOO hetero to me to be believable.

And the whole concept of how felines fed made little sense to me. If they fed off each other, where did the actual nutrients come from? A nursing mother has to consume more food to provide milk for their infants but felines don't do that. It didn't really occur to me until after finishing the book, which probably says something positive about the book because, as a scientist, I usually latch onto those inconsistencies like a leech.

There were a total of 8 typos I caught in the book, so it was fairly well edited, though not perfect. It didn't detract from the reading of the book in any way.

And last, I did love the last line of the book. It felt like a perfect ending to the story. While this book was not perfect, I definitely believe it is worth a read.
Read more
One person found this helpful
Helpful
Report abuse

jodikayti
4.0 out of 5 stars i'm very suprised at how much i enjoyed this book
Reviewed in the United States on June 18, 2019
I seriously thought, 'what are you thinking to read this book?' well, it's different but it's also weird, sweet, romantic, sexy, hot and very much enjoyable. I never new I needed to read a book about a canine, an avian and a feline. I'm definitely going to read books 1 and 2 now.
Read more
Helpful
Report abuse

Cat of Cat's Books: Romance Blog and Themepark
2.0 out of 5 stars Meh
Reviewed in the United States on June 22, 2019
This book worked the least for me of the books in this series likely because while I liked the heroes the best it gets a little porny and also the heroes spend too much time apart.
Read more
Helpful
Report abuse
See all reviews