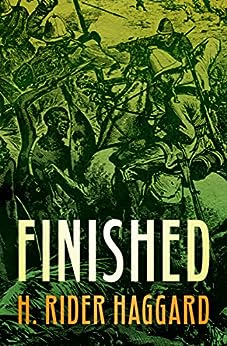 by H. Rider Haggard (Author) Format: Kindle Edition
See all formats and editions
Sorry, there was a problem loading this page. Try again.

The legendary adventurer Allan Quatermain finds himself embroiled in the Anglo-Zulu War in this adventure novel by the author of King Solomon’s Mines.

Explorer and big game hunter Allan Quatermain is on a shooting expedition in South Africa when he hears of unrest brewing between the Boers and the English. Sir Theophilus Shepstone is announcing his intention to annex the province of Transvaal for the British Empire—and the Boers are itching for a fight to keep it. But Quatermain soon realizes that something more sinister is happening in the veld.

The destruction of the Zulus is at hand, and behind it all is the wizard Zikali. Seeking vengeance against the royal Zulu House, Zikali sets the Zulu people against their former allies in a cataclysmic war. Following the novels Marie and Child of Storm, Finished is the thrilling conclusion of H. Rider Haggard’s Zulu Trilogy within his larger Allan Quatermain series.
Read more
Previous page
Next page

Optimized for the MobiPocket Reader, this is a very special edition of H. Rider Haggard's "Finished." If you click on one of the words in the text, a convenient pop-up window appears with an English thesaurus for that word, which comes from Webster's Online Dictionary (www.websters-online-dictionary.org). Running throughout the text, uncommon English words are highlighted in blue that are likely to be found in examinations in English Language Programs (ELP), English as a Foreign Language (EFL) programs, or in English as a Second Language Programs (ESL). The highlighted vocabulary words are also likely to be found in Advanced Placement-(AP-), TOEFL-, TOEIC-, SAT-, PSAT- , GMAT-, LSAT-, GRE-, or similar examinations. TOEFL-, TOEIC-, GRE-, AP- and Advanced Placement- are trademarks of the Educational Testing Service; PSAT- is a registered trademark of the College Entrance Examination Board and the National Merit Scholarship Corporation; SAT- is a registered trademark of the College Board; GMAT- is a registered trademark of the Graduate Management Admissions Council; LSAT- is a registered trademark of the Law School Admissions Council. All rights reserved. These organizations neither sponsored nor are affiliated with this product. --This text refers to an alternate kindle_edition edition.

Sir Henry Rider Haggard, KBE, Kt known as H. Rider Haggard, was an English writer of adventure novels set in exotic locations, predominantly Africa, and a pioneer of the Lost World literary genre. He was also involved in agricultural reform throughout the British Empire. --This text refers to an alternate kindle_edition edition.

Michael Hawks
4.0 out of 5 stars I love Allan Quatermain
Reviewed in the United States 🇺🇸 on December 1, 2013
Verified Purchase
Another wonderful book by H. Rider Haggard. While the book has all the elements you come to expect from Haggard and Allan Quatermain, I thought the beginning was a little slow - thus only the 4 star rating. But regardless, if you are an Allan Quatermain fan, you will want to read this book.
Read more
One person found this helpful
Helpful
Report abuse

countrydrummer
5.0 out of 5 stars Fantastic storyteller of Africa
Reviewed in the United States 🇺🇸 on March 14, 2019
Verified Purchase
A great adventure story from a great storyteller. A classic literary that you cannot put down. H. R. Haggard at his best.
Read more
Helpful
Report abuse

LittleFoot
5.0 out of 5 stars Gift for friend
Reviewed in the United States 🇺🇸 on February 18, 2013
Verified Purchase
I ordered this for a friends kindle. She must have liked it as she is an avid reader and I've not heard otherwise. There are many kindle free editions of books and its nice, in this economy, to have access to reading material that is free. Thanks, Amazon, for this service..
Read more
Helpful
Report abuse

RWM
5.0 out of 5 stars Last of the Zulu trilogy....
Reviewed in the United States 🇺🇸 on August 2, 2014
Verified Purchase
After reading all 3 of this Zulu trilogy and enjoying them very much...this last one connects all the dots of this great saga. Highly recommend to anyone to read all 3 books by the late great Henry Rider Haggard.
Read more
Helpful
Report abuse

s.ferber
5.0 out of 5 stars A WONDERFUL ENDING TO A SUPERB TRILOGY
Reviewed in the United States 🇺🇸 on May 22, 2000
"Finished" comprises the third book in H. Rider Haggard's so-called Zulu trilogy, the first two novels being "Marie" and "Child of Storm." This is a magnificent set of books that deals with the downfall of the Zulu people, as personally witnessed by Allan Quatermain, the hero of 14 of Haggard's novels, including "King Solomon's Mines." "Finished" has all the elements that Haggard's fans have come to expect from him: a great and fast-moving story, scenes of big-game hunting, interesting and amusing characters, bloody and well-described battles, all with a dash of mysticism and some supernatural elements thrown into the mix. It is a real rouser. In the first half of this book, our hero Quatermain gets personally involved in the problems of a young couple in the bush veld in Africa, but the entire second half of the book details his stay with the Zulus, their war councils, and the great battles that the Zulus fought against the English in the late 1870s. The tone of the book is suitably elegiac, mourning the passing of a proud people and culture. This is a magnificent trilogy of books, and it is a real shame that they are all out of print. But I heartily recommend that you seek them out.
Read more
22 people found this helpful
Helpful
Report abuse
See all reviews
Report an issue
Does this item contain inappropriate content?
Report
Do you believe that this item violates a copyright?
Report
Does this item contain quality or formatting issues?
Report