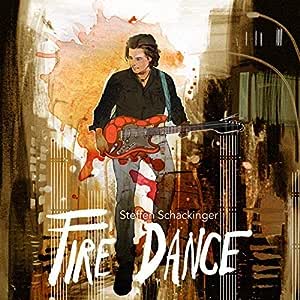 Classical precision meets uncompromising rock on new album from world class guitarist. Steffen Schackinger belongs to the absolute elite, and his new album Fire Dance takes his instrumental guitar music to new heights. With millions of views on YouTube, a worldwide tour resume and international recognition as a top class guitar player, Steffen Schackinger has established himself as outstanding in his field. His second solo album, Fire Dance, is no exception. Steffen Schackinger combines precision and timing from his background on the classical scene with the uncompromising expression of rock music. I express myself through my guitar, as a singer does with the voice and a painter with a brush. The strings are not limited by language , says Steffen Schackinger. His first album earned him a spot on the prestigious Guitar on the Edge top 50 of the world s best guitarists in 2010 ranking 15th. Since then he has been playing guitar clinics throughout Europe and Asia. But now the former Merzy guitarist is once again ready to hit the stage. The album Fire Dance is published by US label Candyrat Records, and Steffen Schackinger is joined by former Merzy bass player, Henrik Bjørn and drummer Lars Daugaard of the Danish hit orchestra Gnags

Bruce Bishop
5.0 out of 5 stars World's greatest, but little known, electric guitarist/composer.
Reviewed in the United States on March 18, 2018
Verified Purchase
Steffen Schackinger is, in my opinion, the world's greatest electric guitarist/composer. I am a huge fan of EJ, Satriani, Vai, Petrucci, and Paul Gilbert. Schackinger is classically trained and brings a third dimension -- counterpoint -- to his music. He is a master of the looper pedal.
Unfortunately, he was poorly packaged from the get-go -- back in 2009. If he has been properly promoted from the beginning, this would be his third or fourth commercial album, instead of his second -- funded by fans through Patreon.

Jeremy
5.0 out of 5 stars This is a fantastic
Reviewed in the United States on July 21, 2017
Verified Purchase
Steffen Schackinger is just a wizard of the guitar. Not only is his playing absolutely flawless, he does things on the guitar that just go beyond the level of human skill. He paints incredible sound pictures with his melodic leads. He can make you see the song, more than just hear it. This is a fantastic album
Read more
Helpful
Comment Report abuse

Barry D. Phillips
5.0 out of 5 stars Steffen does it again!
Reviewed in the United States on December 6, 2016
Verified Purchase
Worth the long wait! Sophisticated guitar riffs played as few can play. Melodic and powerful! Steffen does not disappoint as a song writer or as an artist. I'm listening to Fire Dance for the second time as I write and understand why this is the title song. Excellent!
Read more
One person found this helpful
Helpful
Comment Report abuse

Charlie
5.0 out of 5 stars Love guitar? you'll love this album
Reviewed in the United States on February 21, 2017
Verified Purchase
Excellent album. SS is a master of his art
Read more
One person found this helpful
Helpful
Comment Report abuse

Kathi W.
5.0 out of 5 stars Worth the wait!
Reviewed in the United States on February 27, 2018
I waited a long time for this to come out and love it. If Steffen ever plays in the USA I hope to be there. He and his band are freaking amazing!!!
Read more
Helpful
Comment Report abuse

A. McDavid
5.0 out of 5 stars Can't get this CD out of my player! I N C R E D I B L E !
Reviewed in the United States on April 8, 2018
Wow. I finally realized this CD was out, and having loved Steffen's first recording, I purchased this one immediately.
Popped it in the player in my car and have not been able to take it out....for days now....it's THAT good.
Steffen Schackinger should be as well known as Joe Bonamassa or Eric Clapton; his skills, tone and technique are not only amazing but awe-inspiring.
I heard Mr. Schackinger say his biggest early guitar influence was Mark Knopfler, but I hear touches of Steve Morse, Jeff Beck, a bit of Joe Satriani
and maybe Phil Keaggy. But suffice to say, Steffen Schackinger is no copy cat chameleon, he has a style all his own.
His forte is electric guitar instrumental, so I was surprised to hear a vocal track at the end of Fire Dance.
At first listen I thought the lyrics a bit corny....the second listen I found myself later humming the tune...the third and forth listen I was paying attention and realized there was not only a good song in there, but there was a flame-thrower of a blistering guitar lead in the break and tasty licks throughout.
Not sure how I'm gonna get this CD out of my car deck now....I may need to put Steffen's other CD in.

rainbow man
5.0 out of 5 stars yep!
Reviewed in the United Kingdom on May 10, 2019
Verified Purchase
Beatifully recorded instrumental album. I like it and so I'll be investigating more from the guy. It isn't stunning but it is very very good
Read more
Report abuse