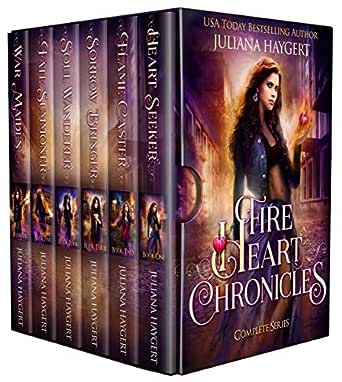 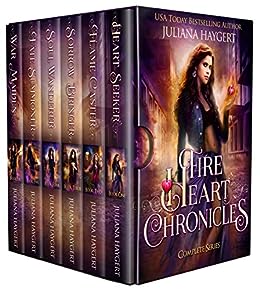 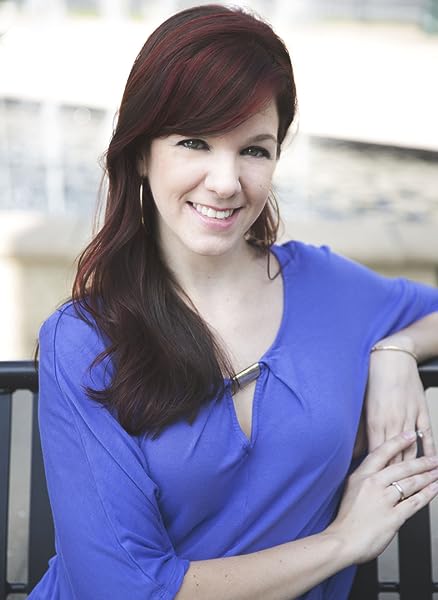 Positive Thinker
3.0 out of 5 stars Conflicted
Reviewed in the United States on July 11, 2019
Verified Purchase
I read the entire series this week. Mirella discovers that she’s not human, but Tzagane a super powerful Romani gypsy. The world is filled with Revenants (vampires), Wuz (Werewolves), and Alchemists who seek to destroy the Tzagane with their own supercharged powers. The world creation was good for the most part taking place in deserted forests, small towns and mountainous areas. Additionally, Mirella discovers she’s the most powerful of Tzagane - the Heart Maiden - who must protect the others from all their enemies when all she really wants is to trust others and be at peace.

Mirella falls in and out of love with different men when she recognizes her poor judgment and they reveal themselves as untrustworthy. She’s super tough and powerful, but agonizes over each enemy she kills. She understandably struggles to trust her mother after a lifetime of lies about Mirella’s true identity. She grew up thinking she was an only child, but as the lies unravel she discovers a family of friends and blood ties.

Sometimes after 6 novels the stories seemed formulaic. On Mirella’s personal level - believe/trust someone, have faith broken, agonize, kill or watch them be killed and agonize more even though they deserved it. As a Heart Maiden, feel unworthy of everyone’s love, but rise above all challenges and challengers to protect her people. Gain experience and power along the way, but not much wisdom as she repeats the same pattern. Romantic interests abound. Even throws in a homosexual relationship in the final book.

The author wants us to believe Mirella is a good person who makes mistakes and “does better” in future endeavors. Also, that she’s a moral person bc she’s conflicted over killing an enemy, but she accepts sex with multiple boyfriends before marriage is normal. Feeling bad about something makes characters good people even if they behave poorly. Finally, committed homosexual relationships are equal to committed heterosexual relationships - although that message is left to the final novel when you’re already invested in the series.

The last novel had many editing errors and the process was obviously rushed, even leaving in crossed out words. The first five only had rare issues.

Kindle Customer
5.0 out of 5 stars Can’t put down
Reviewed in the United States on March 29, 2020
Verified Purchase
I don’t usually like fantasy books but this set was a bargain so I gave it a try. It is very well written. Great development of characters and plots. Just when you think the problem is solved the author subtly sneaks in another situation so you can’t stop reading until it is solved but then in comes another unexpected twist. Highly recommend.
Read more
2 people found this helpful
Helpful
Comment Report abuse

Kəssəndrə Malka
5.0 out of 5 stars Tzaganes Magic
Reviewed in the United States on April 7, 2020
Verified Purchase
i enjoyed the series, just wished that her dance would of been included into her new life as a way of battle and that other charters had more depth in the story. i enjoy getting to understand Cora a little better with the novella included with the set. looking forward to reading the authors other works.
Read more
2 people found this helpful
Helpful
Comment Report abuse

Kathy
5.0 out of 5 stars Great Story
Reviewed in the United States on May 16, 2020
Verified Purchase
I gave this series of books by Juliana Haygert five stars because the story line was perfectly sculptured to go from one book to the next. I enjoyed it very much, one of those books that you can't wait to get to the end to see what happens, then upset because you've reach the end because the story is over.
Read more
One person found this helpful
Helpful
Comment Report abuse

GrumpyGranny
4.0 out of 5 stars Surprising
Reviewed in the United States on July 21, 2020
Verified Purchase
When I am offered an entire series of books for a nominal fee, I usually expect very little, but this series was surprising to me - it was an interesting and gripping story arc with ups and downs and no cop outs. I sat and read through the entire series in one go, not wanting to stop. That is a rare occurrence. I commend the author, and for those souls who enjoy this genre, hop in the adventure is fun.
Read more
Helpful
Comment Report abuse

Kindle Customer
5.0 out of 5 stars Fire Heart Chronicles
Reviewed in the United States on March 26, 2020
Verified Purchase
Wow! The Fire Heart Chronicles is one of the best I have read in a long time! Well worth your time!
Read more
2 people found this helpful
Helpful
Comment Report abuse

Amazon Customer
5.0 out of 5 stars Fantastic!
Reviewed in the United States on March 21, 2020
Verified Purchase
This is a fantastic book that keeps you on the edge of your seat! The storyline is well written and character development is on point. I promise you won't be sorry! This set has everything you need.
Read more
2 people found this helpful
Helpful
Comment Report abuse

Amazon Customer
5.0 out of 5 stars Great story line.
Reviewed in the United States on August 1, 2019
Verified Purchase
Kept me engaed with the characters. Was easy to follow from book to book. Did not want to stop reading.
Read more
4 people found this helpful
Helpful
Comment Report abuse
See all reviews

Kindle Customer
3.0 out of 5 stars Good Attempt
Reviewed in the United Kingdom on April 8, 2020
Verified Purchase
I found the main character, Mirella annoying and child like in her decision making and emotions. She never learned from her mistakes and fell into one trap after another.

I struggled on; reading the complete series and expecting the character to develop and become smarter when dealing with her enemies but that never happened.
Read more
Report abuse

Kristina
5.0 out of 5 stars Great series.
Reviewed in the United Kingdom on April 21, 2020
Verified Purchase
A marvellous read, got me through the first weeks of the isolation from corona virus. Each book flowed so well into the next, but still left you guessing how the Heart Maiden will survive. Unlike a lot of books I have read I was not left hanging at the end, wondering what happened next. A great finish, brilliant, can't wait to read more from Juliana.
Read more
Report abuse

Mike Riley
5.0 out of 5 stars Great author.
Reviewed in the United Kingdom on September 18, 2020
Verified Purchase
Fantastic read if this is your reading preference.
Read more
Report abuse

zami74
4.0 out of 5 stars Interesting read
Reviewed in the United Kingdom on May 31, 2020
Verified Purchase
This series is a very good read it keeps you interested from page one you know a good read from page one
Read more
Report abuse

Kindle Customer
5.0 out of 5 stars The fire heart chronicles
Reviewed in Canada on March 18, 2020
Verified Purchase
Because I enjoyed this series of books I decided the grammatical errors would be somewhat overlooked. A bit cheesy and irreconcilable in areas I still read zealously.
Read more
Report abuse
See all reviews