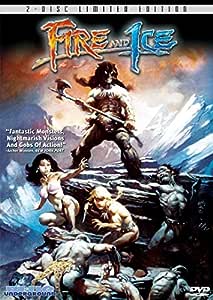 Secure transaction
Your transaction is secure
We work hard to protect your security and privacy. Our payment security system encrypts your information during transmission. We don’t share your credit card details with third-party sellers, and we don’t sell your information to others. Learn more
Details
Ships from
Amazon.com
Sold by
Amazon.com
Fire and Ice (Two-Disc Li... has been added to your Cart

It began as a once-in-a-lifetime collaboration between two of the greatest icons of the fantasy genre: Controversial animator Ralph Bakshi (director of FRITZ THE CAT, WIZARDS and the original THE LORD OF THE RINGS) and legendary illustrator Frank Frazetta (creator of the iconic CONAN THE BARBARIAN, VAMPIRELLA and Edgar Rice Burroughs book covers). It became - and remains - one of the most startling animation epics of all time. Now experience a world unlike any ever seen, where savage warriors, horrific monsters and luscious maidens battle for the soul of civilization in a time of good and evil, pleasure and pain, and FIRE & ICE. This long-unavailable cult favorite has been remastered in High Definition from original vault materials, remixed in stunning 6.1 DTS-ES and 5.1 Dolby Digital Surround EX, and loaded with exciting Extras. Disc 2 contains FRAZETTA: PAINTING WITH FIRE, the acclaimed feature-length documentary that explores the remarkable life and career of the man who changed fantasy art forever. Bonus features include: Disc 1: Audio Commentary with Producer/Director Ralph Bakshi, The Making of FIRE AND ICE, Bakshi on Frazetta, Sean Hannon's Diary Notes, Behind-the-Scenes Still Gallery, Theatrical Trailer, Disc 2: FRAZETTA: PAINTING WITH FIRE - Interviews with Frank Frazetta, comic legends Bernie Wrightson, Dave Stevens, William Stout and Neal Adams, directors Ralph Bakshi and John Milius, demonic rocker Glenn Danzig, and much more (93 Mins.), Audio Commentary with Director Lance Laspina and Producer Jeremy J. DiFiore

The mighty-muscled heroes and big-bottomed babes of fantasy artist Frank Frazetta inspired animator Ralph Bakshi (Fritz the Cat, Wizards) to create the swords-and-sorcery epic Fire and Ice. Bakshi uses a technique called rotoscoping, which uses live-action film of actors as the template for animation, allowing him to put realistic action into fantastic environments. The verisimilitude of movement in a cartoon can be startling, but that's about all Fire and Ice has to offer; the wafer-thin story, overwrought characters, and clumsy dialogue are vapid cliches. Of much greater interest are the extras in this two-disc set, including a making-of feature that demonstrates the painstaking process of rotoscoping; enthusiastic commentary from Bakshi, who's a jovial, down-to-earth guy with a thick Brooklyn accent; deliriously fatuous diary notes from one of the actors; and a feature-length documentary called Frazetta: Painting with Fire, which reveals the artist to be more intriguing than any of the barbarians he's famous for. The effusive praise of other fantasy artists and "Frazetta historians" occasionally veers into Spinal Tap territory, but it's fascinating watching Frazetta turn from a 1950s James-Dean-style tough guy into the king of fantasy art. Though his work is often dismissed as adolescent kitsch, the documentary persuasively argues that Frazetta deservedly dominates his corner of the art world. --Bret Fetzer

4.6 out of 5 stars
4.6 out of 5
170 global ratings
How are ratings calculated?
To calculate the overall star rating and percentage breakdown by star, we don’t use a simple average. Instead, our system considers things like how recent a review is and if the reviewer bought the item on Amazon. It also analyzes reviews to verify trustworthiness.

Leo Hott
5.0 out of 5 stars Waiting for the live action remake of this classic!!!!
Reviewed in the United States on December 12, 2014
Verified Purchase
I bought this as a gift for my 22 year old son he has left the roost & deserves a copy of his own. We used to watch this together & have fun trying to cast it with actors over the year's wishing someone would remake this into a live action film. Now there is a multi million dollar piece of advise to some director! Over the years our imaginary live action movie cast has changed, but this animated sword & sorcery classic never gets old! Just look at the number of 5 star reviews on this old gem!!! Frank Frazetta enjoyed the status of a living legend long before he passed away. Frazetta's art work was in such demand that publishing houses would ask him " You can just give us anything we will find a book to put it on!?!?! His artwork re introduced thousands to the brilliant work of Robert E Howard's in the 70's as well as breathing new life into Edgar Rice Burroughs's novels! The bonus disc is worth the cost of this masterpiece collaboration between Frazetta & Bakshi!!! The bonus disc is all about Frank Frazetta a nice biography on an incredible artist! The feature film is top notch Sword & Sorcery action at its best. It could have been penned by Robert E Howard(creator of Conan) himself. I am an artist myself & like Frank Frazetta I draw from my minds eye meaning I use no swipes, models or photo's & I believe that any artist that works this way has a natural ability for story telling because the images you paint are scenes from an imaginary adventure story from your minds eye. Frank also collaborated with James Silke on 4 Death Dealer novels. If you've listened to Molly Hatchet that's the dark brooding medieval giant on all their album covers. I could go on forever spouting Frank Frazetta praises, so to some it up If you Love Conan or The Lord of the Rings you will probably love this movie also!
Read more
8 people found this helpful
Helpful
Report abuse

David Revilla
4.0 out of 5 stars The Conan the Barbarian of 80's animation.
Reviewed in the United States on December 24, 2014
Verified Purchase
Lovers of the Sword and Sandal genre, or who like their cartoons a little less children-savvy, will enjoy Ralph Bakshi's cult-classic Fire and Ice. The movie is set in a prehistoric world where the forces of Ice, led by the sinister Nekron, is gradually expanding their glacier kingdom south into the more fertile lands of Fire Keep. Only Lorne, the sole survivor of a tribe of warriors crushed by Nekron's forces, and Teegra the princess of Fire Keep, can stop him with the aid of badass barbarian Dark Wolf (arguably the best character in the movie).

This is 80's nostalgia at its best. The creators of this movie used roto-scoping to create the realistic movements of the actors. Think of rotoscoping as the precursor to the green screen techniques used by movie studios today. It's feels like watching a painting come to life, and for anyone who wants to gain a true appreciation of how the film was made using this style, I highly suggest watching the "Making Of" part after seeing the film. Animators were truly magicians in those days, no computers, no CG graphics, just hand, paint, loud machines, and a lot of heart.

For those who believe animation is solely for the little 'uns, do NOT buy this movie. There is a lot of violence and blood, as this is about barbarians after all. Also, a lot of near nudity, especially on the part of Teegra, the insanely hot heroine of the film. No full nudity, mind you, but our more 'Puritan' audience might feel put off by it.

Get ready for a great adventure.

Spencer E Hart
3.0 out of 5 stars Good movie but disc design flawed
Reviewed in the United States on December 5, 2019
Verified Purchase
I bought this in 2014 so perhaps the issue has been corrected by now, but the artwork layered on top of my movie disc is unbalanced. One edge is physically thicker than the other, so the disc wobbles and makes loud noise as it spins in DVD player.

Possibly I'd have rated this higher if I'd actually been able to hear all of the dialogue over the noise.
Read more
Helpful
Report abuse

J. Cullen
5.0 out of 5 stars Sword and sorcery galore
Reviewed in the United States on September 24, 2020
Verified Purchase
A great film with lots of action/romance and tons of excitement. It will definitely keep you entertained and glued to your seat with your eyes on the tv. A must see for fans of Conan and the like.
Read more
Helpful
Report abuse

Jonathan Thibodaux
4.0 out of 5 stars Underrated
Reviewed in the United States on May 16, 2014
Verified Purchase
This is not a perfect film by any means. Many people dislike it because it has poor writing. I don't think I can entirely agree with that, though. The writing is not bad, it's just simple. It's a sort of Frank Frazetta stylized, savage fairy tale. The animation is its own, the look is completely unique and despite the amount of skin that is shown that story is surprisingly innocent. The animation is a pretty impressive form of rotoscoping which some people like and some people don't. I personally thought it was great!
On the cons, the characters are under developed. They should have spent more time getting us acquainted with these people and providing back story. The conclusion, though not entirely inconclusive, still leaves something to be desired as it feels like it has resolved the over arching problem but hasn't given the characters any inward triumph to carry away off screen. Like we didn't get the moral to the story, perhaps.
Over all, an enjoyable film. I personally love the artistry, I love Frazetta, I loved this neo-caveman world, but the story just needed more substance to take it from something enjoyable to something amazing.
Read more
2 people found this helpful
Helpful
Report abuse

Remington Steele
4.0 out of 5 stars Interesting Little Video
Reviewed in the United States on February 19, 2012
Verified Purchase
This film was created almost thirty years ago and I had not known about it until recently. It's not a blockbuster but it is a nice diversion and fun to watch on a rainy day.

It is animated of course although the characters are rotoscoped (real actors which are painted over on the film) so it is pretty fluid. The people are scantily clad especially the heroine who is in a thong bikini almost the entire length of the DVD. The hero wears something that covers just a little more but not much more. Some people are offended for whatever reason so I'm stating it.

As for me, it's a good addition to my collection where I'll probably watch it again when I need a light escape from the world.
Read more
Helpful
Report abuse

Carl Counts
5.0 out of 5 stars Super but
Reviewed in the United States on November 21, 2020
Verified Purchase
Super fast delivery and awesome product but it makes me absolutely furious when a package is left on my brand new truck in my driveway when it’s raining and I don’t have a carport
Read more
Helpful
Report abuse

csisson
5.0 out of 5 stars Loved This!
Reviewed in the United States on April 1, 2019
Verified Purchase
My husband and I have watched this numerous times! If you like animated fantasy that actually has a story behind it, you'll probably like this, too!
Read more
Helpful
Report abuse
See all reviews