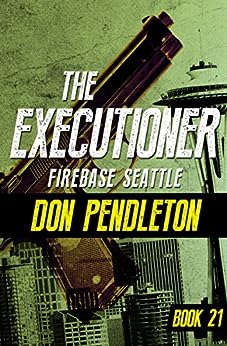 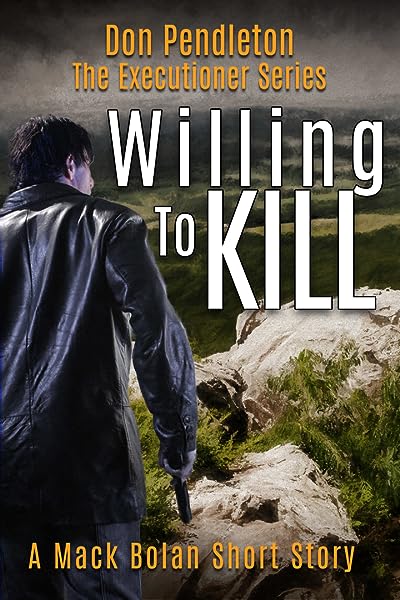 by Don Pendleton (Author) Format: Kindle Edition
Book 20 of 37: The Executioner
See all formats and editions
Sorry, there was a problem loading this page. Try again.
Outside Seattle, the Executioner discovers a Mafia plot to dominate the world

On a remote island in Puget Sound, a millionaire’s house has been sold to the mob. The dock has been lengthened, security has been tightened, and men with guns have been scattered across the shore. Late on a moonlit night a figure in black drops in from the sky. He is Mack Bolan, the Executioner, whose one-man war against organized crime has carried him to Seattle. He will not like what he finds.

Beneath the main house, Bolan discovers a sprawling underground bunker being dug into solid rock. This is the Mafia’s newest firebase—a fortified compound from which to control shipping traffic across the Pacific Ocean. If the mob can control shipping, it has a chance to control the world, unless Bolan finds a way to push this island fortress back into the sea.

Firebase Seattle is the 21st book in the Executioner series, but you may enjoy reading the series in any order.
Read more
Previous page
Next page

Don Pendleton (1927–1995) was born in Little Rock, Arkansas. He served in the US Navy during World War II and the Korean War. His first short story was published in 1957, but it was not until 1967, at the age of forty, that he left his career as an aerospace engineer and turned to writing full time. After producing a number of science fiction and mystery novels, in 1969 Pendleton launched his first book in the Executioner saga: War Against the Mafia. The series, starring Vietnam veteran Mack Bolan, was so successful that it inspired a new American literary genre, and Pendleton became known as the father of action-adventure.
--This text refers to an alternate kindle_edition edition.

Don Pendleton (1927-1995) was born in Little Rock, Arkansas. At the age of fourteen, during World War II, he enlisted in the Navy, serving until 1947 as a Radioman. He returned to active Naval duty during the Korean Conflict. Following the war he worked as a railroad telegrapher, CAA/FAA air traffic control specialist, and aerospace engineer. In the latter career, he worked as a senior engineer for Martin-Marietta's Titan ICBM programs and as an engineering administrator in NASA's Apollo Moonshot program. He published his first short story in 1957 and his first novel in 1961. Leaving his aerospace career behind, Don turned to full time writing in 1967, produced a number of mystery, science fiction and futuristic novels, a screenplay, and numerous poems, short stories and essays.

In 1969, War Against the Mafia, featuring Mack Bolan, the Executioner, was published. The phenomenal success of the first novel led to thirty-seven sequels over the next twelve years. Dozens of imitators, inspired by Pendleton's success, arose during the 1970's to constitute a new particularly American literary genre and the term Action/Adventure coined by Pendleton himself, has since spread to encompass television and motion picture formats as well. The original best-selling Executioner novels have been translated in more than thirty languages with in-print figures of more than 200 million copies worldwide. Pendleton franchised &quot;Don Pendleton's Mack Bolan&quot; to Harlequin's Gold Eagle Books in 1980, and more than 900 books based on the Executioner and spin-offs--Phoenix Force, Able Team, Stony Man, Mack Bolan, Super Bolan, have been published under their continuing program.

In November 2018, an Executioner short story written by Don Pendleton in 1978, &quot;Willing to Kill, The Executioner: Mack Bolan Short Story&quot;, with an Introduction by Don's widow, Linda Pendleton, was published in ebook and print by Pendleton Artists.

Don turned to nonfiction in 1990, and with his wife, Linda, produced To Dance With Angels, a definitive study of life after death and spirit communication. Published in hardcover by Kensington, it had four editions. Linda wrote a new Introduction and put the latest edition into print and Kindle. Don and Linda also co-wrote Whispers From the Soul, available now in audiobook, print and Kindle.

Don's last novel was Roulette: The Search for the Sunrise Killer, co-written with Linda Pendleton, and is available in Print, Kindle, and audiobook.

In 2012, Don's science fiction was republished for Kindle and Print: The Guns of Terra 10; The Godmakers; and The Olympians. The three books are also available in a Kindle box set.

Don was a long time member of the Authors Guild; Authors League of America; Writer's Guild of America, West; Past West Coast Director of Mystery Writers of America; International Platform Association; and a frequent speaker on campus and writers' symposiums.

Don Pendleton published more than 125 books in his career. For biographical reference and bibliography on Don Pendleton, see:

Amazon Customer
4.0 out of 5 stars Great Action/Adventure But...
Reviewed in the United States on December 29, 2019
Verified Purchase
As with any of Don Pendletons Executioner series this book delivers tons of action and adventure but... It totally lacks in editing and proof reading as the errors are quite annoying in the digital versions of his books.
Read more
Helpful
Report abuse

Kindle Customer
3.0 out of 5 stars More
Reviewed in the United States on May 28, 2019
Verified Purchase
Definite lack of detail. It's like a lack of the complete story. The story line needs a lot more info to complete the mental picture
Read more
Helpful
Report abuse

C. S
4.0 out of 5 stars Bolan is a man amoung men
Reviewed in the United States on May 2, 2013
Verified Purchase
Best if you try to read in order, but not necessary. There is a briefing in the first few pages of previous action. They may be few in pages but they pack a big punch.
Read more
Helpful
Report abuse

maria
5.0 out of 5 stars Database Seattle (The Executok 21)
Reviewed in the United States on May 17, 2015
Verified Purchase
ANOTHER outstanding book by Don Pendleto n. The action was fast and furious. A very enjoyable reading.All the executioner books are great
Read more
Helpful
Report abuse
See all reviews