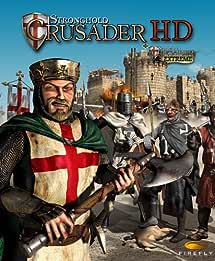 Brand: Firefly Holdings Limited
Platform : Windows Vista, Windows, Windows XP, Windows 7, Windows 2000 |
Rated: Teen
| DRM: NONE
4.0 out of 5 stars 94 ratings
Currently unavailable.
We don't know when or if this item will be back in stock.
Note: After purchase, you can access the item in Your Games Library.
By placing your order, you agree to our Terms of Use.
This product is non-returnable and non-refundable.
Note: Currently, this item is available only to customers located in the United States.
Download size: 850 MB
Download time: 2 minutes, 16 seconds on broadband, 1 days, 10 hours, 32 minutes, 22 seconds on dial-up

Platform:PC Download
Stronghold Crusader HD updates the classic castle building game from Firefly Studios with high definition graphics, allowing generals to view an entire battlefield on a single screen. The sequel to the classic Stronghold, Stronghold Crusader HD moves from Europe to the Middle East, introducing fiendish AI opponents, new units, new characters, 4 historical campaigns and over 100 unique skirmish missions. Stronghold Crusader HD features several campaigns documenting the First, Second and Third Crusades, as well as conflicts within the individual Crusader states. Battles such as Nicea, Heraclea, siege of Antioch, Krak des Chevaliers and the Siege of Jerusalem all feature, as do the Crusader Trails from the Stronghold Warchest and Stronghold Crusader Extreme. Extreme plays exactly like the original Stronghold Crusader, only with a few additions. The unit cap has been increased from 1000 to a staggering 10,000 troops, special Tactical Powers such as the Arrow Volley can be used and new buildings make their appearance alongside the Extreme skirmish trail.With new high resolution graphics players also have more control over their soldiers than ever before. The new HD battlefield view allows you to zoom out and play in real-time, with the whole map on one screen. Advance on the castle gates while flanking the enemy from behind, feign retreat and lead your foe into a deadly trap or just sit back and watch the destruction unfold.

4.0 out of 5 stars
4 out of 5
94 customer ratings
How does Amazon calculate star ratings?
Amazon calculates a product’s star ratings based on a machine learned model instead of a raw data average. The model takes into account factors including the age of a rating, whether the ratings are from verified purchasers, and factors that establish reviewer trustworthiness.
Top Reviews

Update:
Mcaffe smart web was hosing the download. Removed that and then ran as admin in windows 7 compatability mode and all went fine.

Gerald J. Wyckoff
5.0 out of 5 stars A serious time suck.
Reviewed in the United States on December 30, 2013
Platform: PC DownloadVerified Purchase
A continuation of the "Stronghold" series, updated for HD. Very good quality graphics for what it is, and excellent gameplay. The soundtrack is also a hit.

This is a complex game- lots of things to manage- but I've certainly enjoyed it. Some of the scenarios have solutions that are trivial if you think them through and don't mind feeling cheap. Think "zerg". But many of the maps lend themselves to protracted sieges.

While the AI isn't always the most intelligent thing, you can and will lose on occasion even if you're doing everything right on some of the more difficult maps, so I think the challenge is there.
Read more
Helpful
Comment Report abuse

Htoo
5.0 out of 5 stars Rating for this game should automatically be set to 5 stars.
Reviewed in the United States on January 9, 2013
Platform: PC DownloadVerified Purchase
Welcome back to the time when Stronghold was a great title.

If the reader is one of those future people, please don't be discouraged by stronghold 2 and 3 or 4 or 5 that could come out. This Stronghold crusader is worth buying because this is one of those games I still go back to play after 11 years later with many different games to chose from. This game was originally released in 2002 and I'm still playing it and have it installed on my computer in 2013.

This is medieval real time strategy game which the player runs both economy and military affairs of a castle. There were many games which had medieval era and walls but this was the only game of that time to have actual functioning walls which you can put people on. (Age of empires 3 which came out later with way more impressive graphics still could not manage to do that) That function made the walls not only barriers but also a kind of defense weaponry and walls became a crucial part of building the stronghold. That makes players come back to this game again and again to find a way to build the most effective castle.

The building and population cap concept was also very unique. In a way it might be similar to Liquid Entertainment's Battle Realms. The player start out with idle civilians coming out of the castle keep and they can be turned into farmers or workers in different production lines and can be even equipped into soldiers. The lord is responsible to maintain a good happiness for the population in order to tax and run an efficient economy. However, one can only directly control the military units though, not the civilians.

Another strong concept of this game is that the player can hire Arabian mercenaries with money and also enlist one's own crusader soldiers but with a catch. One has to produce weapons and armor to actually field that kind of army. Which is still a revolutionary concept because in many games, one can hire military units with many resources but do not have to produce the weapons and armor.

Everything about that game cannot be explained in a review but it is also not so necessary to do so. The game is surprisingly pretty easy to learn if one had a little experience in Real Time Strategy, Real Time Tactic and City Building Strategy games.

Even though I condemn the Firefly studios for what they have done with later Stronghold games, I thank them for making this into the HD version.
Read more
30 people found this helpful
Helpful
Comment Report abuse

Peter
5.0 out of 5 stars So happy to see this game in HD
Reviewed in the United States on November 18, 2016
Platform: PC DownloadVerified Purchase
So glad this game is now in HD. I've grew up playing the game and didn't like that on new computers it is still showing the display as a square and not HD. the price is great and the product is exactly how it is described.
Read more
Helpful
Comment Report abuse

Blake mcKinley
2.0 out of 5 stars 1 works other doesn't
Reviewed in the United States on March 30, 2017
Platform: PC DownloadVerified Purchase
Would give 4-5 stars but downloaded and extreme hd edition only works. Crusader stronghold hd doesn't and I really only bought it for that. Waste of 10 bucks
Read more
Helpful
Comment Report abuse

TFack
4.0 out of 5 stars Great Game. Would like to download on multiple devices!
Reviewed in the United States on December 6, 2016
Platform: PC DownloadVerified Purchase
Great game! A bit pricey! I wish once you bought it you could download it to multiple computers like you would with the disk however still a great game.
Read more
Helpful
Comment Report abuse

dana wood
5.0 out of 5 stars No thanks
Reviewed in the United States on November 4, 2018
Platform: PC DownloadVerified Purchase
Return cuz it was a download only
Read more
Helpful
Comment Report abuse
See all reviews from the United States
Pages with related products. See and discover other items: video gaming systems, arrow buildings