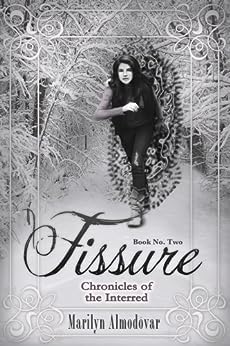 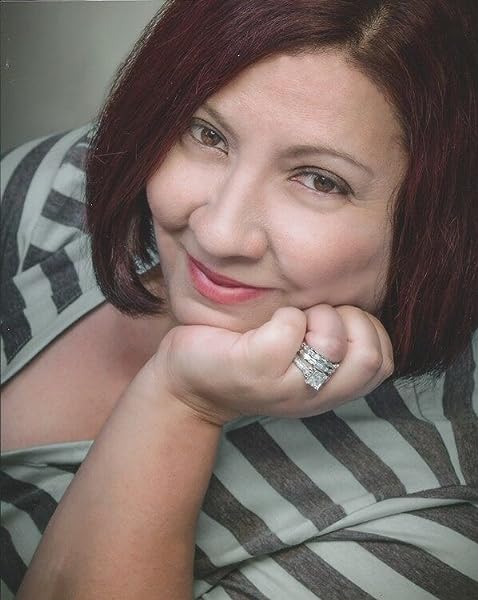 Karen Blue
4.0 out of 5 stars Recommended read for all YA Fantasy fans!
Reviewed in the United States on November 11, 2014
Fissure is the second book of The Chronicles of the Interred. As far as second books go, I have to give Marilyn major props for making this book even better than the first. This book is such a rush. I could not stop reading this book once I started it. This book is action packed. Baxter leads us right in to a journey of self discovery into the past and the present.

This is not a standalone, It would be much too confusing for someone to pick up the series with this book. You should read the first book, Interred . Once again this cover is perfect for the book. It shows her running out of a fissure, or something. There is so much jumping around in this book; 2013, 1976, 2001, alternate realities galore. Baxter starts off in this story feeling bad. She doesn’t remember what happened before there is just a blank spot and then she wakes up in the hospital. She may be the cause of all the chaos which makes her want to leave. Instead of keeping her head down, she freezes her healer. This further separates her from the group. They are trying to protect her, but the group is infiltrated by people with malicious intentions for her powers anyways. Baxter finds herself face to face with a fissure and gets pulled in…

Now that we know the characters this book just flows. Baxter is still discovering things about her past, things about her power, and things about the people in her world. Baxter is much different from the first book though. She is all magic, the normal in her life is gone. I loved that everyone is not just good and evil. We find that some characters are marred by shades of grey and that makes Baxter question everything. I liked that flaws are revealed. This keeps the characters honest and likeable. There is so much more in this book then in the first. The main players are time bender, absorbers, warriors and transporters. These abilities are flipped and exposed for good and evil.

There are a lot of players in this book. That aspect was a bit confusing. I know why the story needed so many characters. The story could have been so much longer. I don’t wish for less. I wanted more. The author wrote all the characters very well. It was just when something happens that we only get to see how a few characters are dealing. We only get snippets of conversation. I wanted more. I am giving this book 4/5 stars; because it is not a standalone and because there could be more to it. It is still a recommended read for any YA fan of fantasy.
Read more
Helpful
Report abuse

Michelle C. Jordan
5.0 out of 5 stars On the edge of your seat moments that is sure to thrill!
Reviewed in the United States on February 16, 2015
Fissure the second book in the Chronicles of the Interred series picks up where the first book left off, with Baxter and Jack recouping from their adventures and battle with Declan. Declan Ashdown had been caught in a time loop for 122 years, and once released had determined to have his revenge against the Time Bender Baxter. So after Baxter and Jackson… her healer… had defeated their enemy, believing it was the end of their troubles. They attempt to heal, and find some normalcy. Although with both having lost so much, including family and those they love….there is an anger and hurt that appears to come between them initially. These strong emotions, on both sides have Baxter and Jackson attempting to protect the other at their own detriment and by going to extremes. But soon the two are joined again as one when having to face those who called themselves allies, but certain facts surface to make them wonder who they can trust but one another! Plus an old enemy returns by causing Fissures (small breaks) in time, in order to destroy the Time Bender once and for all.

I really, really enjoyed this book! the first presented a unique aspect on the paranormal YA and had a fast paced plot which left me breathless by the time I finished it. Fissure did not disappoint. Ms. Almodovar has a talent for telling a story that moves quickly and is full and rich…but in a way that seems effortless. As a reader, I can feel myself becoming lost in Baxter and Jackson’s adventure, while (and I actually caught myself doing this…) (physically)…holding my breathe in anticipation on what will happen next!

I enjoyed the interplay between Jack and Baxter. I will be honest in the first book, (before I knew better) I was actually rooting for Declan and Baxter uniting,…but trust me that quickly change…but I remember feeling as if Jackson was…,lol idk…an intruder… BUT again that was BEFORE I discovered Declan’s true nature! Now the tenderness and fierceness that Baxter and Jack have in desiring to protect one another, the tenderness in the way they speak to one another…just how they are…I love… plus Jack is such a hottie with his green eyes and black hair…I love how the author describes his effortless ability to be swoon worthy:)

I was also surprised at several revelations as the story evolved! (Attempting to not share spoilers is difficult!) Lol

Fissure was well written, fast paced full of intrigue, twist and turns and on the edge of your seat moments that is sure to thrill! I truly recommend to those who enjoy romance and adventure with Paranormal elements!
Read more
Helpful
Report abuse
See all reviews

lisa m w
5.0 out of 5 stars cleverly written and just brilliant
Reviewed in the United Kingdom on August 11, 2014
Verified Purchase
After Interred I was eager to get my hands on this book and as I never doubted Lyn did not let me down, it amazes me how she can write a book crossing many timelines and not get lost in what she as wrote not only that the but myself as a reader doesn't get lost either, and that says a lot as I have no sense of direction.

Baxter is back and is as snarky as ever and I love her for it, I hope she never changes. we also have the swoony and hunky Jack, he is another of my book boyfriends.

Baxter's journey in this book really as her questioning everything she thought she knew about the people she trusted. her boundaries are pushed and she will do things she can never be proud of and deeply regrets but self preservation is at the utmost of her mind if she wants to protect those she loves.

New characters are introduced in this book and I don't want to give anything away but it throws Baxter for a loop and not much can do that. We also have some of the same beloved (or not) characters from the first book and as Baxter evolve so do their, I think the way Lyn builds characters is amazing you really do feel like you know them... until you don't, they may not make a lot of sense but instead of reading my ramblings you could read the book yourself and find out what I mean.

As in the first book, I still love David, not in the swoony way because he is an elderly gent and that would be just weird, lol but I love him because he is Yorkshire like yours truly ;-)

I could quite literally scream at Lyn for the ending in fact I may have wrote he strongly worded email, however I cannot wait for the third book and hope I don't have to long to wait.
Read more
Report abuse
See all reviews
Back to top
Get to Know Us
Make Money with Us
Amazon Payment Products
Let Us Help You
EnglishChoose a language for shopping. United StatesChoose a country/region for shopping.
© 1996-2021, Amazon.com, Inc. or its affiliates