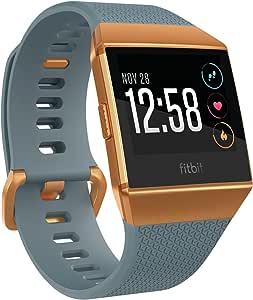 Real-Time Guidance to Reach Your Goals

Essential Features to Keep You Moving

Fitbit Ionic; Fitness Wristband: Get personalized workouts and coaching to reach your goals with your Fitbit Ionic Fitness Wristband. Track your pace & distance with built-in GPS and monitor progress with continuous heart rate. Pump up your jam with storage for 300+ songs and get connected to your favorite apps for sports, weather, and more. Plus, you are all set when you want to treat yourself to that post-workout beverage? You can make purchases on the go with the built-in NFC chip.

4.0 out of 5 stars
4 out of 5
11,864 global ratings
How are ratings calculated?
To calculate the overall star rating and percentage breakdown by star, we don’t use a simple average. Instead, our system considers things like how recent a review is and if the reviewer bought the item on Amazon. It also analyzes reviews to verify trustworthiness.

PK
5.0 out of 5 stars Best health/activity tracker on the market - battery life makes a huge difference!
Reviewed in the United States on October 19, 2017
Color: Blue-gray/SilverEdition: Ionic GPS Smart Watch
If your primary purchase decision is a health/activity tracker, get the Fitbit Ionic. If you want a smart watch with a bunch of features (that you really will not use), get the Apple Watch. As a former Apple watch user I really love this.

First, it looks great (I always thought the apple watch face was too small on my wrist) and the various tracking capabilities are super robust and accurate. The most understated feature is the battery life! I cannot tell you how frustrating having to charge your watch every day is. It also makes other watches useless for my favorite functionality - sleep tracking. Sleep cycle patterns are really insightful is already impacting how long I allocate to sleeping and tracking how slight tweaks to my "sleeping experience" (different pillows, oil diffusers, etc) impacts my light sleep vs deep sleep, etc.

Features - No, it does not have all the features or apps of the apple watch. However, I promise you will not use most of them. You may think you will send texts from your watch, but you really won't. Most apps for the apple watch are super gimmicky and basically just scrunch an awesome phone app experience into a much smaller and less useful interface. For me - tracking heart rates, activity, sleeping patterns is the most important aspect of a smart watch (below).

Tracking - This sets the Fitbit far apart from any other smart watch. I do not think the apple watch is even comparable here, though to be fair i think they are trying to achieve different things. In this regard, I guess it's better to compare the Fitbit to some of the Garmin watches. For awhile, the Fitbit lagged behind Garmin for accurate heart rate and elevation tracking. While I do not own a Garmin, i have played around with them and from everything I have read the gap is closed in terms of accuracy. I really like how the Fitbit automatically detects different activities. I don't know how it works but it somehow knew when I took a bike ride a few days ago, which I thought was awesome. Also, tracking V02 max (basically how well your body uses oxygen and thus how fit you are) and comparing this to age benchmarks is pretty cool (I don't believe this is a part of the apple watch offering).

Interface - I have read reviews about the laggy user interface and difficulties syncing, etc. Not sure if this was resolved with a software patch but I haven't experienced this at all. The interface seems very responsive to me and it syncs to my phone whenever I open the app. I haven't used the Fitbit pay yet, though it seems pretty cool (in theory).

The Fitbit app - last point to mention is that the Fitbit app is awesome and has been consistently getting more useful as time goes on. I really like how they compare your health and fitness to benchmark standards for your age. I find myself opening it multiple times a day, which I never did with my apple watch/apple health app.

In conclusion - I obviously really like my Ionic. I usually don't post amazon reviews but I found myself frustrated by articles that seem to miss the point of having a tracker on your wrist. I don't know if those reviewers are just apple fanboys, but man, I rarely used the apple watch for more than checking the time. The concept of a "smart watch" has changed in my mind after owning one. For me at least, fitness tracking is the most attractive use-case here and the Ionic is the gold standard for this. Stop reading reviews hung up on the lack of being able to send a text message. Get this watch and start seeing yourself caring much more about your overall well being.

Not sure how to verify this isn't a paid for review other than you checking my user history or posting a photo of it on my wrist/ order form. I ordered it direct on the Fitbit site (attached the order form). Also, I ordered the leather band (pricey, I know) but have not received it yet. I actually really like the blue/grey band though.

Hope this helps your decision!

herralf
1.0 out of 5 stars Device Malfunctioned After a Few Months, Fitbit Refused to Honor the Warranty
Reviewed in the United States on March 10, 2018
Color: Charcoal/Smoke GrayEdition: Ionic GPS Smart WatchVerified Purchase
Very disappointed that the device's HR stopped working after a few months and with Fitbit's response to the problem. I've had the device for about three months, and it worked well. The HR tracker is not perfect and can fluctuate significantly (which is to be expected), but in the past few days it's gone haywire. I called and spoke to numerous Fitbit customer service folks, and they offered a number of reasons why the HR tracker wasn't working. Some--like saying that my HR was 30-40 BPM higher because I wasn't as active for a day--were ridiculous, while others were more credible.

Long story short, the problem with the watch is most likely mechanical. It was working fine, but then stopped suddenly, with no intervening software changes (that I'm aware of, at least) or changes to how I wear or use it. However, Fitbit outright refused to honor the warranty and service the watch, and the last rep became somewhat hostile when I continued to press for an explanation why.

Don't spend so much money on a device that'll break down so soon, without (apparently) even a limited warranty to back it up.
Read more
656 people found this helpful
Helpful
Report abuse

Russ. M
1.0 out of 5 stars Don't believe all the hype, it's far from smart
Reviewed in the United Kingdom on July 16, 2018
Color: Blue/Ice Gray/Silver GrayEdition: Adidas EditionVerified Purchase
Bought this in April 2018 having been impressed with the advertised hardware and software features. Sadly, I found it to be inaccurate, temperamental and nothing but hassle. Having read the litany of complaints in previous reports I can now believe them all. If you take tracking your performance seriously then look elsewhere, this is not for you. The features look impressive but if the results are wildly inaccurate then what is the point. I now find myself with just another good looking waterproof watch.
Read more
53 people found this helpful
Report abuse

Liam Byrne
2.0 out of 5 stars Buyer Beware: Glitchy Hardware
Reviewed in the United Kingdom on August 2, 2018
Color: Blue/Ice Gray/Silver GrayEdition: Adidas EditionVerified Purchase
I am very disappointed by this product. I bought the Ionic Adidas version as I am a long-time Fitbit user (this is my third device) and an avid runner so delighted to see a GPS-enabled product in the Fitbit universe. Very easy to set up, lovely to look at and use. However!: During my first run 2 days after I received it, 80% charged, it turned off. So I reset and recharged and it was fine for 3 more days. After that it has turned off more times than I can remember, during normal use, during sleep, during exercise etc. I wasn't expecting this after the investment made but from checking on-line, it's a known bug. It's a shame as it's a nice device but let down by glitchy hardware. I have returned the unit to Amazon for a full refund after one weel and have bought a Garmin instead. I would not recommend this device to anyone and I am done with Fitbit.
Read more
4 people found this helpful
Report abuse

Dhaval Parekh
1.0 out of 5 stars Bad Product provided by Amazon Vendor
Reviewed in India on June 26, 2018
Color: Charcoal/Smoke GrayEdition: Ionic GPS Smart WatchVerified Purchase
I have received Fitbit iconic which was my dream smart watch but when I received it can't charged after lot of time I tried. It can't turn on. It's really bad for me as I saw many you tube video and product details but when I got this product it's sent by Amazon which I thought it was damaged so it can't turn on .. I tried.dor 3 days but I can't switched on. Really SAD.
Read more
38 people found this helpful
Report abuse

Fred said:
1.0 out of 5 stars Stop ! Do research, Think ! Don't let heart rule your head ! Do you want to take a chance on Ionic!?
Reviewed in the United Kingdom on August 31, 2019
Color: Blue/Ice Gray/Silver GrayEdition: Adidas EditionVerified Purchase
Fitbit's Flagship model did not switch on !! Brand new, straight out of the box.
What does this say about the quality control ?
Can you really afford to spend that much money and have a chance you will need to send it back !!?
Or will it keep going? Why just one year guarantee ?! Are you happy to bin it and buy another after 365days if the internals or side-buttons fail ?
I have been very happy with my Fitbit Alto HR for over 18months now and so treated myself to the Ionic because I wanted the music and GPS in one unit. I read feedback about very slow updates, very slow music transfer, etc but was prepared to suffer these since (i think!) once transferred, it's done and the music player and bluetooth earphone transfer is decent. But I am not going to find out !
My 37minute call to Customer service was ok, going through the procedures but end result was the same, needs to be returned (to Netherlands by the way, not sure if at my cost).
As I noted to Customer Service, when you add this issue to the other poor issues reported, it seems like Fitbit has taken a step too far - a great idea but poorly implemented with poor quality control on the manufactured product.
Such reports are not what you expect about the FLAGSHIP model, which represents the very best that Fitbit can offer. It carries the reputation of the company.
I would love to have written a glowing report since I really do rate my Alto HR and the Ionic's specs are great, BUT the execution is flawed.
It's a lot of money for an Ionic and unless you are happy to have the risk of return, my experience shows you could be very disappointed.
Read more
One person found this helpful
Report abuse
See all reviews