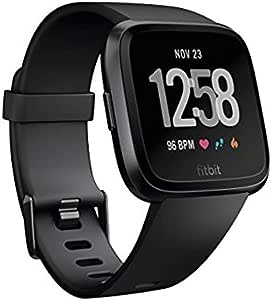 Visit the Fitbit Store
4.2 out of 5 stars 8,262 ratings
| 1000+ answered questions
Available from these sellers.
See more

Live your best life with the Fitbit Versa family of health and fitness smartwatches. The Versa Lite Edition includes core fitness and smart features like activity, sleep and heart rate tracking, notifications, apps and 4+ day battery life—plus bold color choices and an easy one button design. Fitbit Versa includes all the features of Lite Edition plus music, on screen workouts, floors climbed and swim lap tracking. Finally, the Versa Special Edition includes all the features of Versa, plus a special woven band and on the go payments with Fitbit Pay.

4.2 out of 5 stars
4.2 out of 5
8,262 global ratings
How are ratings calculated?
To calculate the overall star rating and percentage breakdown by star, we don’t use a simple average. Instead, our system considers things like how recent a review is and if the reviewer bought the item on Amazon. It also analyzes reviews to verify trustworthiness.

WCQ
5.0 out of 5 stars Nice upgrade from Blaze
Reviewed in the United States on July 8, 2018
Color: BlackVerified Purchase
Update after 2 weeks of use:
I've put the Versa through its paces over the past two weeks... 110 miles of walking (235,000 steps) and 400 flights of stairs, plus tested its waterproof claims. Here's what I've found:

- The distance/step tracking is pretty accurate without the GPS, nominally better than the Blaze, but with one exception. It appears to be sensitive to arm movement without walking. For example, I attended a concert and picked up a "mile of walking" just by standing and clapping my hands at the concert. I tested this a couple times. Just sitting and clapping or tapping my knees to music will add steps and distance to the counter. Couldn't find any solution for this other than use the GPS function - connecting it to your phone's GPS - as you exercise, which works well. But now that I know the issue, I can adjust my tracking accordingly. Since I walk with my phone anyway (for security) this is not an issue for me either way.

- Stair/elevation changes track very similarly to the Blaze. My daily outdoor walk route includes some hills and the number of "flights" it tracks never varies by more than one on any given day.

- It is definitely waterproof. In the shower, in the pool for more than an hour, walking in the rain. No problem. You can even read the screen underwater. Haven't tried the ocean yet... that will be next month.

- Without connecting to GPS and only syncing on demand, not constant, I get a good full 5 days of battery life. I find I have no need to have it continuously sync.... if I want to know my progress, it's on the watch anyway with less effort than opening the phone app.

- I have not tested out the music yet, though I've looked at it and the instructions appear pretty straight forward. Since I'm taking my phone with me anyway, I don't need to have the music on the watch. I'm sure I'll try it eventually.

The bottom line for me at this point is that it is everything the Blaze was with a better interface, charging solution, and waterproof.

I’ve had a Fitbit Blaze for 2 years.... it helped me lose 175 lbs over that time period. I replaced it with this Versa mostly because the Versa is waterproof. Other than being waterproof the only functional upgrades are (1) the ability to store music and play music directly thru Bluetooth, the watch’s ability to connect to WiFi (to do OS updates and download music) and (3) the updated operating system that allows third party apps to be installed and used. Otherwise than these it gives me the same functionality as the Blaze.

It is a little smaller and thinner than the Blaze and because, unlike the Blaze you don’t pop it out of its frame, the control buttons seem easier to use. The screen display is much brighter too. The Blaze in direct sunlight is unreadable; this one is fine. Screen resolution appears to be much higher too.

Setup was a breeze. Just follow the step by step directions on the app, which needs to be installed on your phone before setup. There are also some fine videos online that will walk you thru the setup too.

I’ve taken it thru 2 days of activity so far (about 24 hours) and as I write this the battery is 83% charged. Sensors seem a little more sensitive than the Blaze.

Some reviews complain about the apps or the watch faces. I think there are plenty of the latter to choose from and most are free. The one pictured here was free and I liked it because it displays all the tracking on one screen (and with a simple tap on the screen I can change the display color).

All in all I’m happy with the Versa upgrade from the Blaze.

Kevster5
5.0 out of 5 stars Kudos to Fitbit on the new Versa! This is the fitness focused watch to get at a fair price!
Reviewed in the United States on April 29, 2018
Color: BlackVerified Purchase
Had the Charge 2 for a while and loved it. Then switched to the latest apple watch at the encouragement of a few friends. While that apple watch was nice for the few months I wore it, I found I was not using a lot of the features in it that may have been why it was double the cost of the Versa. On the apple watch I found the battery would not last more than 36 hours and the phone app was no where near what Fitbit had in terms of activity and sleep tracking as well as just overall display of the many data points.

When the Versa came out I said why not try it, hearing how slim it was and the extended battery life. It was that or go back to my Charge 2 that is also a fantastic tracker. My goal was to get back to the Fitbit app. I love this watch/fitness tracker and know this is going to be a huge hit for Fitbit. The app I love is now back in my life for the detailed activity and sleep tracker and the battery life is nearly as good as my Charge 2. I have gotten five days of battery life on the Fitbit Versa already - this is with a 45 minute workout on each of those five days included. At the end of the five days I was at 28% remaining, telling me I had another day or two of charge remaining. The texts all come through, the watch rings when I get a all on my iPhone, the screen is crystal clear, the watch itself is very slim compared to apple(no bump on the underside), there must be hundreds of clock faces to choose from, and it has all the apps I could think of needing in the watch store (the store is already noticeably growing). This is the fitness tracker\watch to get. Very impressed and kudos to Fitbit for a well thought out fitness focused watch that is a true competitor to the apple watch.

Just a quick comment on the setup of the Versa. I saw a few comments here about how the setup took 30 minutes or so to complete with an update. My comment is so what? I just put my Versa on the charger, used the app to update it, walked away, came back and wha-la - it was done! It hasn't stopped since!

rstrange1029
1.0 out of 5 stars Not impressed...
Reviewed in the United States on April 21, 2018
Color: BlackVerified Purchase
Not impressed. Had it 4 months and it completely stopped syncing to my phone and kept glitching. Asked for my money back and was refused stating they would just send another Versa. That was 2 weeks ago and have still not received it. Battery only lasts 3-4 days vs the Blaze which was about 7-10 days. The versa is honestly nothing special. I’ve had three different Fitbit’s and all have glitched and been replaced. I don’t get them wet and don’t have a physical job. I take great care of them. But of all the hassle and returns and glitches I could have had a nice Apple Watch. This was my last attempt at trying Fitbit products. It will also be my last.
Read more
276 people found this helpful
Helpful
Report abuse

Robert H.
1.0 out of 5 stars The "fitbit versa" watch is garbage.
Reviewed in Canada on November 17, 2019
Color: BlackVerified Purchase
The only reason I purchased another "Fitbit" product is because of the after market bands I bought for it after the one that came with it broke after 6 months and I have a work benefit that covers the cost. The first one a "fitbit Versa" was garbage. two weeks after the warranty was up it broke down. the green and Multi color photo diodes quit working that track heart rates sleep etc, ( The reasons I bought this unit). I continued to wear it as a timepiece only just to be disappointed again within a couple of week when the battery failed to hold a charge for more and 18 to 20 hours. I would recommend a Samsung, or Apple watch. Stay tuned we'll see how long this new one lasts.
Read more
2 people found this helpful
Report abuse

Lester
4.0 out of 5 stars Reasonable product with good shipping.
Reviewed in Canada on November 2, 2019
Color: BlackVerified Purchase
Shipping was done in a reasonable time. Product was new in box. A little tricky swapping the band but not too bad. Might want to do some extra research on common issues as it seems some of the software quirks with Fitbit products have been around for a while.
Read more
Report abuse

Himangshu Kumar
1.0 out of 5 stars DEFECTIVE TRASH. DO NOT BUY.
Reviewed in India on November 16, 2020
Color: BlackVerified Purchase
Crashes and freezes on startup screen on 1st day itself. Does not connect with phone app. Applied for return and refund. PLEASE DO NOT BUY.
Read more
One person found this helpful
Report abuse

Jasmine bawa
1.0 out of 5 stars Worst product
Reviewed in India on October 20, 2020
Color: BlackVerified Purchase
Not true to its praises .... Most inaccurate ....... Money wastage .......also didn't receive the refund
When I recieved it first time it wouldn't even switch on and on return no refund has been processed....pls don't buy it