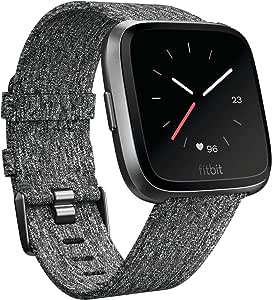 3.7 out of 5 stars
3.7 out of 5
973 customer ratings
How does Amazon calculate star ratings?
Amazon calculates a product’s star ratings based on a machine learned model instead of a raw data average. The model takes into account factors including the age of a rating, whether the ratings are from verified purchasers, and factors that establish reviewer trustworthiness.

clipper
3.0 out of 5 stars it's good, but.. Night Owls should just skip fitbit products.
Reviewed in the United States on May 24, 2018
Color: Charcoal WovenVerified Purchase
Picked up the special edition as I have a phone without nfc and decided "what the hell".. So on to the review, pros, cons, etc.

It looks pretty good and isn't as thick as the ionic, gps via phone works fine when it works, altogether it's not a bad product. I am going to list cons before pros as i feel they are more important when choosing a product.

CONS:
1) Fitbit still hasn't deemed it necessary to provide any relief for night shift workers or night owls. Your day starts at 12:00 am and ends at 11:59 pm; no ifs, ands, or buts. Which means, step reminders can not be set for any hour range that crosses the midnight mark. I used to be a programmer before family health issues drove me to being a healthcare worker full time. It is NOT hard to change the code for time tracking, otherwise every time clock and accounting app out there would screw you. There is absolutely no reason for fitbit not to fix this.

2) Sleep tracking on mine, with the original clock face, different clock face, rebooting it, etc... reliably loses 2 hours at the end of my sleep cycle. If you get up, then go back to bed, you are SOL. I mainly bought this for sleep tracking and step counting.

3) Heart rate tracker... I have a 39.99 smart watch from china that can sit on my wrist and measure heart rate. This fitbit has problems with tattoos. Even when not over the tat, it still loses monitoring occasionally and that may be part of the problem with the sleep tracking.

4) The pedometer works well when it works. When I first got it, i put it on tight but not too tight. I took 100 steps, it counted 7. I loosened it up, tried again, 102... Not bad, better than my china watch. I then wore it all day, worked on a car, and have to wonder if my impact wrench gave it the extra 3000 or so steps that day.

5) Bluetooth.. Is iffy at best.. any app, clock face, etc I load, it errors.. I have to turn it off, on, then manually sync to get it to load. The wifi is great, if it would actually utilize it for anything other than music or firmware, it would probably fix that issue as the regular sync via bluetooth will auto retry... clock faces, etc... not so much.

1) Fits well and is unobtrusive. I now only remove it to charge it or when working in an environment that may damage it.

2) The app really isn't all that bad except for the lack of night owl / nighshift abilities.

3) The open SDK is great, I have played around with it a bit and besides the lack of tutorials on fitbit's website, it is a decent attempt to open up their hardware to developers.

4) The design is refined. It doesn't look like it was just tossed together.. With some work it could probably maintain all features and be the same thickness as a regular watch. With the price paid, that would be nice.

5) I forget i am wearing it... There is something to be said for a watch that feels ok all day... I own a lot of watches, and yes, I consider the versa a watch... Until they iron out some issues... True it is a watch with decent features, but at this point in time, that is all it is.

In closing, I really wanted to give it 5 stars... Especially at a 200+ dollar price point. But I do not feel that I received what I paid for, In the end, it is a very nice watch with a semi-usable app, and not much thought given to how it side-loads apps. Overlooking people with non-standard schedules is pretty much inexcusable these days. The app offering new features like "sleep insights" is all well and good, if the actual hardware would track and sync properly.

I wanted to love it, but at this point, the alta hr seems like a much better deal if you want the app compatibility and such.

And just in case anyone suggests changing the time zone so i can have my activity and step reminders on night shift, or manually logging my sleep... No... Just no... I didn't pay 200+ for a tracker that has half @ssed software that won't perform properly.

Bual
1.0 out of 5 stars Great! Then it broke 👎
Reviewed in the United States on June 24, 2018
Color: Charcoal WovenVerified Purchase
Love the product, after 2 months I woke up to a black screen and I wouldn't turn on again. Had frustrated experience with support and was required to RMA my watch. It's now a month later, I have no watch, no response.. How can Fitbit track my health when it breaks and the company has no CS policy to keep it's users tracking. I asked for a refund but Fitbit will only support returns if it comes from Fitbit not Amazon. I will sell this when it's returned and won't by another Fitbit.
Read more
477 people found this helpful
Helpful
Comment Report abuse

JC
5.0 out of 5 stars Glad I purchased this over an Apple watch
Reviewed in the United States on June 8, 2018
Color: Charcoal WovenVerified Purchase
I was really debating between this and Apple watch but so glad that I bought this Versa.
I bought this only for fitness reasons and didnt want to be bothered with constant notifications/messages/calls, etc.
So far this Versa does exactly what I need it to do and gives me all the data which helps me stay healthy and motivated.
You really need to keep this on you 24/7 in order for you a accurate data over time.
I did not know if sleep data would help me but it has become one of my favorite features of the watch.
Also love the fact that this watch is so light, battery life is long and dosen't get in the way while in the gym.

The only negative thing I can think of is that sometimes the screen dosen't always come on when you raise your wrist to see the time. But you can always double tap the screen to get it on.

If you live an active lifestyle and want to refine your training or you are a newbie and want to get active, I would highly recommend this Fitbit Versa watch. However, if you just want to have a phone on your wrist for notifications, love all things apple, play with apps, etc. then get a Apple watch. (by the way I am an iphone user)
Read more
464 people found this helpful
Helpful
Comment Report abuse

Michael N
1.0 out of 5 stars DOES NOT WORK WITH ANDROID. Not reliable; disappointed
Reviewed in the United States on June 19, 2018
Color: Charcoal WovenVerified Purchase
Disappointed overall. Pros: Tells time, tracks steps locally. Cons: Major issues with syncing, bluetooth connectivity, NFC payment not working, activities not being tracked properly with the phone to GPS link. It is frustrating because this watch could be so great if all features worked 100% of the time. Currently only getting most features to work less than half the time. Even the alarms are unreliable. Step count is inaccurate. Bus and boat rides both count as steps even though I'm not moving. Like I said, I am disappointed. Especially considering the cost.

Update 8 July 2018 - Was forced to uninstall the Android Fitbit app because the app was consistently draining 20-25% of my battery and was causing every other app to slow and malfunction. Bluetooth connection was not reliable. Watch was only showing notifications occasionally, regardless of settings for persistent connection, always sync, etc. Contacted Fitbit for support and they were unable to offer a solution or a timeline for when their app will be fixed and for when the watch will be usable again. "At this moment we don't have an estimated date to release this update, however, rest assured that we'll release it as soon our software development team finishes with the investigations and testing." Extremely disappointed since I'm already outside of the return window.
Read more
109 people found this helpful
Helpful
Comment Report abuse
See all reviews from the United States

Stephen Taylor
4.0 out of 5 stars As Advertised.
Reviewed in Canada on March 12, 2020
Color: Charcoal WovenVerified Purchase
I do not use a smart phone so have not been able to set up Fitbit yet.
Read more
Helpful
Sending feedback...
Thank you for your feedback.
Sorry, we failed to record your vote. Please try again
Report abuse

Page 1 of 1 Start overPage 1 of 1
This shopping feature will continue to load items when the Enter key is pressed. In order to navigate out of this carousel please use your heading shortcut key to navigate to the next or previous heading.
Back
Next
Pages with related products. See and discover other items: android one phone, Best old style phones for home, cell phone tracker device, stage light box