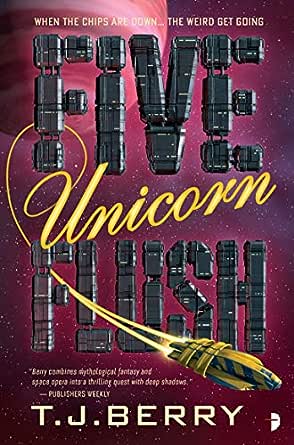 This title is not currently available for purchase
You've subscribed to The Reason! We will preorder your items within 24 hours of when they become available. When new books are released, we'll charge your default payment method for the lowest price available during the pre-order period.
Update your device or payment method, cancel individual pre-orders or your subscription at
Your Memberships & Subscriptions
There was an error. We were unable to process your subscription due to an error. Please refresh and try again.
Share <Embed> 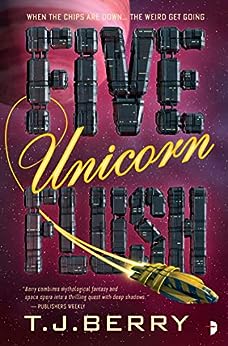 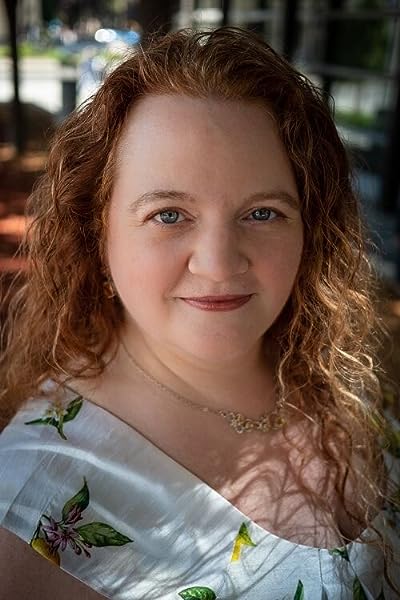 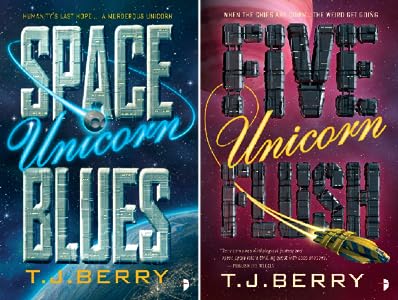 TJ BERRY grew up between Repulse Bay, Hong Kong and the New Jersey shore. She has been a political blogger, bakery owner, and spent a disastrous two weeks working in a razor blade factory. TJ co-hosts the Warp Drives Podcast with her husband, in which they explore science fiction, fantasy, and horror. Her short fiction has appeared in Pseudopod and PodCastle. --This text refers to the paperback edition.

"Berry writes enormously fun books. She has a talent for action, demonstrated several times over… Fast, compelling, compassionate, and entertaining as all hell."
– Locus Magazine

"Berry’s follow-up to Space Unicorn Blues is just as zany and inexplicably touching as her first novel."
– Amazon Book Reviews

“Five Unicorn Flush is a perfect blend of space opera and high fantasy and includes an incredibly diverse cast of mythological features, from centaurs and unicorns to dryads and dwarves.”
– The New York Journal of Books

“Pure wish fulfilment. That is... assuming you wish to be a down-on-his-luck, half-unicorn space rogue, struggling to reclaim his starship and find his lost horn against an army of human oppressors who hold all the cards.”
– G S Denning, author of the Warlock Holmes series

“It was a fun read with an entirely unique concept on a mashup of scifi and fantasy. The spin on the Bala being the key to the expansion of humankind - which then allowed humankind to subjugate the Bala - is the kind of sweet irony that mankind has displayed thousands of times over its history. It was a reminder that not all stories about unicorns have to have them spewing rainbows out of their asses, because sentience, no matter the form, always seems to bring about its own flavor of brutality. I never knew fairies and unicorns could be so dark. The book throws aside so many tropes and just does whatever the fuck it wants, inventing an entirely new world with new rules, and I am always in support of that.”
– Joe Zieja, author of the Epic Failure trilogy

“Shut your brain off and go along for the wild ride... Berry deftly creates a diverse and representative universe full of all kinds of magical creatures and humans, a strange, wacky world.”
– LA Times

“Raucous space opera... Berry portrays the emotions powering bigotry with frightening accuracy in a novel that combines the best elements of mythological fantasy and space opera into a thrilling quest with deep shadows.”
– Publishers Weekly

“An energetic book that starts at high velocity and never lets up. Reading it is one of those “just one more chapter” experiences.”
– Tor.com

“Flawless... another must-read from Angry Robot.”
– The Fantasy Inn

“This story was wonderfully well written, and it was paced really well. There was always something going on that made it hard to put down, and so I ended up reading it much faster than I anticipated. Well into the wee hours of the night, and well past the end of my lunch break at work.”
– Superstar Drifter

“This book, THIS book, THIS BOOK. What do you get when you cross Star Trek with Terry Pratchett’s Discworld, a splash of Hitchhiker’s Guide to the Galaxy and any three of your favorite fantasy series? You get Space Unicorn Blues. Humorous and fun with a splash of commentary on human nature. You will LOVE these characters and hate these characters. I cheered and sobbed (literally) while reading about the aftermath of a war between humans and magical creatures (in space!)”
– Ouroboros Freelance

Elizabeth Aoki
5.0 out of 5 stars Zany and thought-provoking
Reviewed in the United States on July 8, 2019
Verified Purchase
It didn't seem possible after the first book, that things could seem even more pell-mell, heartbreaking, and funny, but the second of TJ Berry's "unicorn books" manages to top the first. Other reviews have covered the cast of characters (including LGBTQIA!) and some of the improbable situations that Capt. Jenny Perata finds herself in, so I won't do that recap. Instead I will note that the author's comfort with this universe now, and mastery of her pacing, builds this book's plot up to an even greater climax.

Where the first book stunned you over and over with orignal and surprising twists and turns, cultural and science fiction/fantasy mashups, and details that made you go "hmm...." this sequel knows exactly where it's going.

Planetside, starside, wry aside, each detail adds up to each plot twist. The author has carefully sussed out exactly how a woman in a wheelchair can be living, then dead, then alive again with a..passenger. The author never lets you forget the importance of giving screen time to children (you will know this reference when you read it). Move over Hogwarts hat ceremonies - there's a naming the planet contest that made this social media maven laugh out loud. And throughout this madcap adventure, Berry never lets you forget there are people underneath the fairytale - diverse in gender, sexual orientation, opinions, and food sources. The redemption arc is strong in this one but it isn't pat or Disney; it's earned and every step of the way chronicled. Bravo to Berry for bringing this story home, and to new readers: you are in for a treat.

Kindle Customer
4.0 out of 5 stars Magnificent story, and copyediting
Reviewed in the United States on May 30, 2019
Verified Purchase
This is a beautiful and amazing continuation of a lovely and dark story, but oh boy the kindle edition I got had heaps of grammatical errors and missing words. The editing team should take another look over the manuscript and fix it to increase the ease of reading.
Read more
Helpful
Report abuse

Reviews & Robots
5.0 out of 5 stars A Masterful Space Opera Brimming with Imagination
Reviewed in the United States on September 3, 2019
Five Unicorn Flush is brimming with imagination that provides solid characters, a fascinating universe, and a promise of a brighter future. Berry writes in an accessible, exciting style, expertly balancing insightful storytelling and delightful space opera thrills and chills. It manages to be a deep look at the bonds of slavery and the struggles of the enslaved to start over, while also filling the pages with explosive battles, death-defying acts, and constant action that continues to reveal new and exciting things about this universe. To say I’m impressed with this book would be a huge understatement. I enjoyed every minute of it and only wish I hadn’t wasted so long getting into it.

NOTE: I was provided a free copy of this book via NetGalley in exchange for my honest, unbiased review.

Genre Minx Reviews
4.0 out of 5 stars I had such fun reading this story!
Reviewed in the United States on May 27, 2019
Five Unicorn Flush is the sequel to Space Unicorn Blues and the story picks up weeks after the end of book one. The Bala, magical creatures, were settling in their new world and even though they were most eager to throw off the shackles of slavery they wore under human rule, many of the Bala were finding life without the amenities that they were accustomed to having to be quite a challenge. Gary Colbalt and his father were doing everything that they could to accommodate the wishes of all but they were finding it hard to please everyone. With revolts being threatened on a daily basis, Gary was finding that his “idea” of what life would be like on their new planet was nothing close to reality.

Meanwhile, former Reason Captain Jenny Perata was scouring space in search of any overlooked unicorn horn to power her FTL drive. Her only focus was to be reunited with her Dryad wife and Jenny was willing to go to any lengths to get her hands on that power source. Her desperation led her to take many crazy risks that put her in the direst of situations, even if they were hilarious at times. While she was focused on finding a way to her wife, back on the Bala inhabited planet tensions were escalating and Gary was doing whatever he could to stabilize the unrest. Unfortunately, there was more going on than most was aware of and despite the best of intentions, he may not be able to keep the peace.

I had such fun reading this story! All of my favorite characters were back and hilarious as ever! If anything, they managed to take their shenanigans up a notch! I laughed out loud so many times but there were also times where my heartstrings were pulled too. The stakes in this story were much higher than before because it wasn’t just about individuals trying to find their own way but about entire races dealing with the aftereffects of choices made in book one. The characters were all trying to do what they thought was best and sometimes it led to rather grim situations. Despite the tension that is felt throughout this book there is also strengthening of alliances and formations of new friendships as well.

I loved Jenny’s character in this story, she has developed much over the last two books and her commitment to her wife was endearing. Even though she is crippled she manages to be one of the toughest characters in this story and I admire her grit. Gary is not the same half-unicorn he was at the start of book one and the situations he had to deal with were quite difficult but he still manages to keep things moving along, sometimes with a little help from his friends. The series, Space Unicorn, is one that I thoroughly enjoy and Five Unicorn Flush is a welcomed addition! If you are looking for a hilarious space opera that has characters that stay with you then this is a story that I would highly recommend.

This review is based on a complimentary book I received from NetGalley. It is an honest and voluntary review. The complimentary receipt of it in no way affected my review or rating.

MissBecka
5.0 out of 5 stars LOVE, LOVE, LOVE this series!!!
Reviewed in the United States on June 5, 2019
This book picks up 6 weeks after Space Unicorn Blues ends and has all the same sass, adventure and fun as the first book!
I am now fully committed to reading anything T.J. Berry decides to write...
And I'm hoping with the way this ended she decides to write more in this series.

Thank you NetGalley and Angry Robot for this ARC.