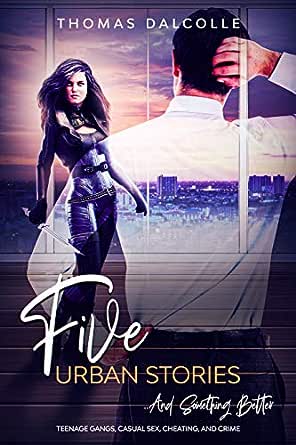 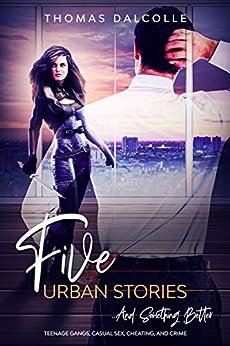 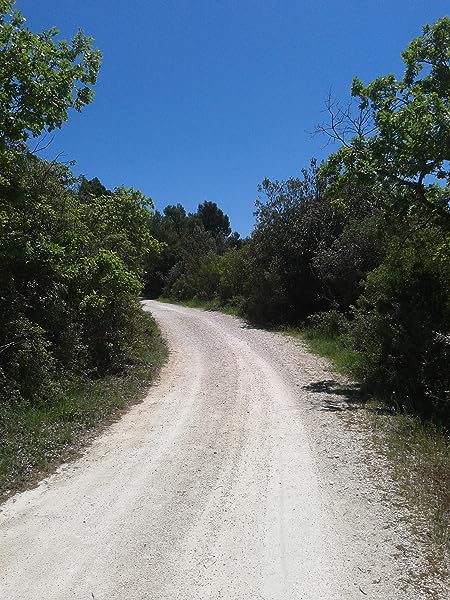 "It is absolutely a great book with a compilation of stories.  I really enjoyed reading it, and at one point I thought to myself that it was a real pity that if finished so quickly.  It literally mocked at me all time." - ramonaportelli.com
★★★★★ "...the third story is absolute genius..., Alfred Hitchcock style thriller" - Captain Corey
★★★★★ "Fast paced, and daring, a great discovery..." - I.M. Redwright
★★★★ "Something very different.." - J. Domino
★★★★ "I enjoyed the brevity of the stories that unfold at line speed.." - Franco Castelli

Action-packed, fast, provoking, with some steamy and some thrilling pages, Five Urban Stories is a page-turner that seems to mock at you all time.
And in no time, you'll undergo the last sardonic mockery, or better, Something Better.
A pity, it's already finished!

4.2 out of 5 stars
4.2 out of 5
4 global ratings
How are ratings calculated?
To calculate the overall star rating and percentage breakdown by star, we don’t use a simple average. Instead, our system considers things like how recent a review is and if the reviewer bought the item on Amazon. It also analyzes reviews to verify trustworthiness.

Bethany Rae Salway
3.0 out of 5 stars Sex without love
Reviewed in the United States on June 20, 2020
Verified Purchase
This is a small book of short stories whose plots are not connected whatsoever, however there’s a certain synergy of themes and consistency of style.

The style is blunt. Although I believe the author is Italian, his English translation is decent, with only a few hiccups in language choice - which rather then detracting, gave a nice foreign flavor to the writing.

I found several of the book’s observations astute and thought-provoking. Here’s one that caught my eye:

The book opens with the best (and longest) of its stories. At first, it seems to be a tale of sadness and depravity – a realistic depiction of the ruin wrought by drug involvement. Then suddenly, our protagonist Fausto shows a hint of moral backbone, at which point the situation becomes much more interesting. When a story incites real concern for its characters, without any reassurance of their success, that’s when you know you’ve found a good one.

None of the other stories quite held up to the first, in my opinion. But they did present complicated and surprising situations. The third story, especially, had some fascinating elements, but the main character was such a sleazeball I spent most of my mental energy despising him rather than paying attention to the plot.

ALL of the characters were sexually loose in the extreme, having sex at the drop of a hat. As a woman who chooses to be more discriminatory in her dating choices, I found this distasteful, and a drawback to my enjoyment of the book.

Indeed, if the stories share a theme as a whole, it is sex. Sex without love. And the scenarios that might arise in such cases. Personally, I have to say, it was not my favorite theme. But for the right reader, I imagine it could prove very compelling.
Read more
Helpful
Comment Report abuse

Captain Corey
5.0 out of 5 stars This Was A Great Read!
Reviewed in the United States on July 13, 2020
Verified Purchase
Short story books are always a challenge to review as, in this case, five different stories are presented. Outside of the 1st story, which is a straightforward plot based on a positive hero, the others are very deceptive. The carefully contrived plots artfully lead the reader down a path where there is more than one possible conclusion (a sort of reader’s optical illusion) from which one must decipher the mystery of what happened. These stories involve characters who have certain failings that make them seem more the victim or an uninvolved bystander than a hero.

The 2nd story is quite Edgar Allan Poe-ish for what the character experiences have a dash of the macabre and the forthcoming second part promises to be even better and more Poe like. I have to give this story two thumbs up just for the mental state the main character is left in. However, the third story is absolute genius, and, without a spoiler, I’ve never read anything like it or read anything so fast in my life in order to keep up with this gripping, fast paced, Alfred Hitchcock style thriller. The entire book gets five stars just for this must-read story alone. The fifth also gets two thumbs up; where a chance conversation with an old flame on a bus and a phone call from a son are intertwined together with a mathematical “cake” formula to create a conclusion worthy of the opium laced mind of the great Sherlock Holmes. Yet is the solution right or wrong? You decide.
Read more

Joseph Domino
4.0 out of 5 stars Something very different.
Reviewed in the United States on June 17, 2020
I loved it! This book is five short imaginative stories.

Warning, there is quite a bit of adult language and topic. But his stories were fun. I often found myself laughing, at times, as I read the passages.

The author Thomas Dalcolle does a good job of describing his characters and scenes. I enjoyed his writing style.
His attempts at using proper English were so noticeable it was disturbing, but sometimes laughable. Being an American I am far more accustomed to colloquial language. Especially when it comes to dialogue. Whereas I might have a villain say, “I am gonna kick your butt!” Thomas might say, “I am going to thrash you soundly!”

But, if you are looking for something a little different, by all means grab a copy of Five Urban Stories. Just for the fun of it.

I received this book as a free review copy from Goodreads and am voluntarily leaving a review.
Read more
Helpful
Comment Report abuse
See all reviews

Sarah
5.0 out of 5 stars An intriguing collection of short stories
Reviewed in the United Kingdom on September 4, 2020
Verified Purchase
What a superb compilation of short stories, revealing the dark side resting within humanity. The stories appear unconnected, yet each one propels the reader into a flood of descriptive events. Events no doubt we could all relate to. Thomas Dalcolle’s writing style is absolutely compelling, his narrative astutely expressive and delivered with fluid panache. An author to keep a sharp eye on, and I for one, look forward to reading more of his work.
Read more
Report abuse
See all reviews