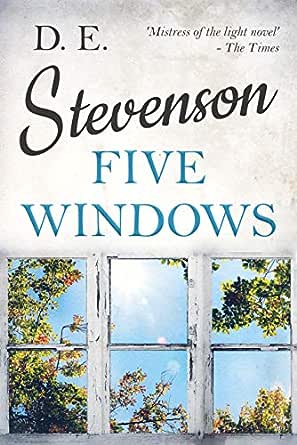 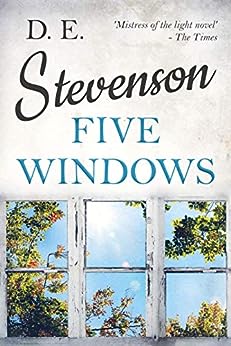 Kindle Customer
5.0 out of 5 stars Delicious!!!
Reviewed in the United States on February 12, 2020
Verified Purchase
I have read all of D.E. Stevenson's books that are available online. I have loved each one, but this book may well be my favorite. David is the sort of young man you would like to know. To use an old-fashioned term, he is honorable. And as you see his character develop, to see him face challenges and temptations, and to watch him do the right thing rather than what is expedient, you can't help but cheer him on. I liked his father very much, but I fell totally under the spell of his mother. You must make a pot of tea and begin reading this book right away. Joy awaits you!
Read more
6 people found this helpful
Helpful
Comment Report abuse

Emily L Ayers
5.0 out of 5 stars One of Stevenson's Finest
Reviewed in the United States on February 4, 2020
Verified Purchase
Five Windows is one of Stevenson's finest works, as it explores the life of David Kirke from childhood through to his mid-twenties. In Stevenson's best tradition, it rambles gently along, sweeping the reader up in David's life as he ventures from his beloved Scottish country home first to Edinburgh and then to London, learning about human nature and his own character as he does. As always with Stevenson's books, my only complaint is that it ended when it did--I would have liked to have kept following David's life through marriage, parenthood, and into old age. We do get a glimpse of David and his family in The Tall Stranger (the companion book to this one, focused on one of the side characters we meet here), but it's not enough!
Read more
4 people found this helpful
Helpful
Comment Report abuse

. Matthews
5.0 out of 5 stars Loved it!
Reviewed in the United States on August 6, 2017
Verified Purchase
I loved the book...love the author..I have read them all now.
Read more
4 people found this helpful
Helpful
Comment Report abuse

Keith V.
5.0 out of 5 stars Wonderful story
Reviewed in the United States on June 19, 2020
Verified Purchase
Clever idea to use the windows to describe each turning point in the life of David. The people he met were well fleshed out, and there were several surprises in store! An enjoyable read.
Read more
Helpful
Comment Report abuse

Amelia
4.0 out of 5 stars Wonderful peaceful book
Reviewed in the United States on May 28, 2020
Verified Purchase
Like one character said “ you know which person is good and which is evil”. Plus, Stevenson will improve your vocabulary.
Read more
Helpful
Comment Report abuse

jamie
5.0 out of 5 stars Anything by DE is fabulous
Reviewed in the United States on October 7, 2014
Verified Purchase
Wonderful! As always by this author
Read more
4 people found this helpful
Helpful
Comment Report abuse

Rory Coker
5.0 out of 5 stars Perhaps her best novel, and perhaps the most difficult to find
Reviewed in the United States on December 17, 2018
In a letter to a fan, written in the last year of Ms. Stevenson's life, she says that many of her books are intended as "serious studies of character... human and carefully thought out..." FIVE WINDOWS may be the best example of this. Narrated in first-person, we hear the story of David Kirche, from his 9th birthday until the eve of his marriage in his mid-20s. Kirche is a born writer, as he discovers when he decides to write down everything he remembers about his best friend and mentor Malcolm, after Malcolm is killed in World War 2. David leaves home (a tiny Scottish village) to study briefly in Edinburgh, and then relocates to London, where Ms. Stevenson really outdoes herself in sketching out the wildly varying characters of the individuals David encounters, first in a dismal boarding house, later as his roaming through London covers a broader area. He eventually finds a comfortable haven in a flat above a bookstore, where at last he has the privacy needed to begin a writing career which turns out to be almost immediately successful.

There are some defects in the book, but they are predictable and easily forgiven. In one of the most bizarre turns, a minor character suddenly announces that what's wrong with everybody in the world today (it's the early 1950s) is that they no longer believe in a god. It's clear that the author wants this critique to be taken seriously. The other problem is that Ms. Stevenson takes care of the need for David to have a "romance" only in a very hasty last chapter, where he "suddenly" realizes that he "loves" a girl he has known for almost his entire life. I would have been happier to see David as deprived of female companionship at the novel's end as he was at the novel's beginning... he needed to concentrate on his writing!

It's definitely worth seeking out a copy of this book, in expensive hardback or in a recent (but still rare) trade paperback reprint. This is Ms. Stevenson doing what she did best.
Read more
8 people found this helpful
Helpful
Comment Report abuse

M R Dean
5.0 out of 5 stars Wonderful read
Reviewed in the United States on December 9, 2013
Verified Purchase
I chose this because its a book I've wanted for a long time. Its a classic tale, and her books are always good.
Read more
3 people found this helpful
Helpful
Comment Report abuse
See all reviews from the United States