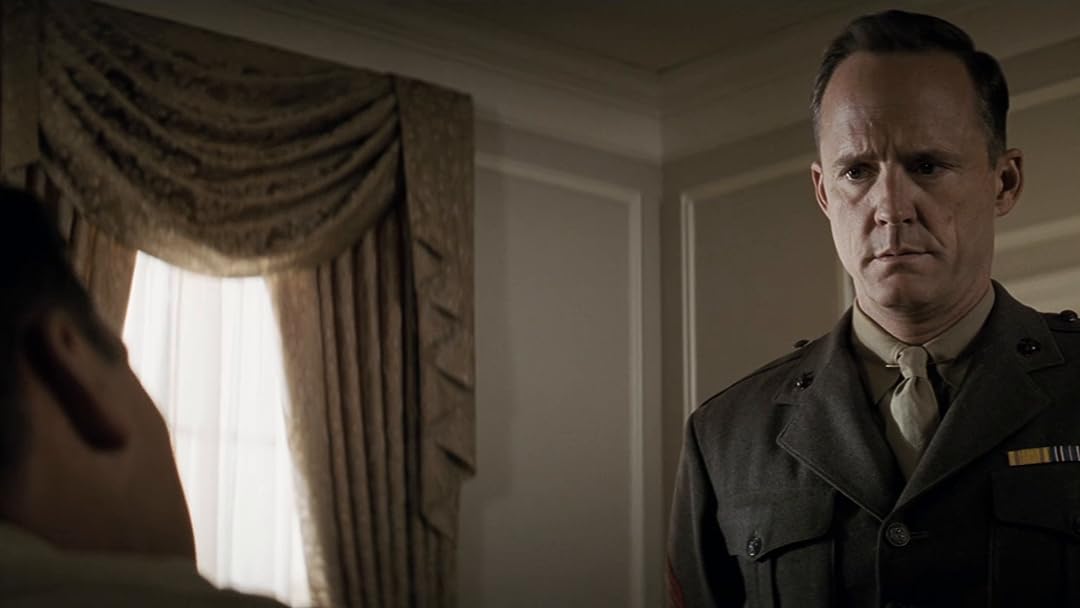 Flags of Our Fathers

(2,896)7.12 h 11 min2006R
From Academy Award-winning director Clint Eastwood and Academy Award-winner Steven Spielberg, comes the life stories of the six men who raised the flag at The Battle of Iwo Jima, a turning point in WWII.

Arizona DanReviewed in the United States on November 25, 2020
1.0 out of 5 stars
An illogically FALSE story that revises history and denigrates the U.S.
Verified purchase
This entire film is predicated on the utterly false idea that America was too war-weary and out of money to complete its victory against Japan in WWII and would have had no choice but to negotiate a peace deal giving Japan huge concessions to end the war if we didn't raise enough money from war bonds. This ridiculous premise (spoken in the film by Treasury Department character "Bud Gerber" played by John Slattery) was never the case for one moment. While the USMC was fighting on Iwo Jima, the United States was spending TWO BILLION DOLLARS (in 1945 money, no less!) on the Manhattan Project to create the atomic bomb, so I hardly think we were strapped for cash! And as far as being war weary goes, we had just defeated the Nazis and were celebrating total victory in Europe, so the idea that we would lack the will to finish the job of punishing Japan for bombing Pearl Harbor and leave them with military power intact to use in the future is patently absurd.
27 people found this helpful
Report abuse

MVWReviewed in the United States on July 29, 2020
2.0 out of 5 stars
Disappointing
Verified purchase
I bought this one expecting that it would be a compliment to Eastwood's magnificent Letters from Iwo Jima, but, alas, all it has in common with that outstanding war movie are a few Iwo battle scenes. Then it jumps to extended biographical treatment of three of the Marines who were depicted in the famous photo of flag raising in the midst of the battle for Iwo Jima and shipped back to the U.S. to help sell war bonds. There is nothing wrong with producing a movie to deal with the plight of these three Marines granted special standing to leave the field of battle, but that's not what I was looking for. The film is surprisingly dull and does not break new ground to inform the viewer of things we did not already know. . I expected a film showing more of the heroism and sacrifice of Marines in combat comparable to the honor shown in Eastwood's treatment of the Japanese defenders in Eastwood's aforementioned companion film. Clint thought otherwise.
2 people found this helpful
Report abuse

e.a.wibleReviewed in the United States on August 19, 2016
5.0 out of 5 stars
... a movie that should have gotten a Oscar for best movie, director
Verified purchase
clint eastwood turned a book into a movie that should have gotten a Oscar for best movie,director,screenplay and soundtrack.being from the generation that went through ww2 he must have had a copy of the iconic pic,following the war.affected by and the particpation effort that won this war.using what happened to him during the war in the movie and realize that it takes a whole nation to win.when these men was used for the fundraising efforts that these men suffered ptsd.ira hayes died of alcoholism,rene gargon could not take advantage of the fame and doc Bradley went onto raise a family and career.not wanting let anyone know or talk about this.with the book and movie it brought out the human suffering of war.always remember those who have served.great movie clint.
17 people found this helpful
Report abuse

joel wingReviewed in the United States on July 8, 2020
4.0 out of 5 stars
Life story of the Iwo Jima Marines more than a war movie & better for it
Verified purchase
Flags Of Our Fathers was a Clint Eastwood film based upon a book of the same name. It covers the men that raised the American flag on the top of Mount Suribachi during the Battle of Iwo Jima in 1944. Through a series of flashbacks it moves back and forth through time to cover the men before battle, during it, the aftermath, and then in their old age.

The combat on Iwo Jima is harrowing. The Japanese were coming out of tunnels and caves and Marines were dropping left and right.

What stands out about the movie is the aftermath of the flag raising. Some of the Marines couldn’t handle the celebrity they had to deal with afterward. Some of them embraced it. Half the Marines died and their families had to handle their legacies. Ira Hayes (Adam Beach) the Marine who didn’t like fame had a really, REALLY melancholy story that is really heart breaking.

This is what makes Flags Of Our Fathers such a great movie. It’s more of a life story than a war film and it’s all the better because of it.
C

L. M. ButlerReviewed in the United States on July 31, 2020
2.0 out of 5 stars
Not at the same level as Saving Private Ryan
Verified purchase
Slow. Rambling. Weak script for an interesting historical story. Flat dialogue. Television quality acting. I'm surprised that Eastwood and producer Spielberg couldn't give us something with more depth. May i make a suggestion? Watch Delbert Mann 1961 "The Outsider" starring Tony Curtis and James Franciscus. Though the plot is basically about Ira Hayes, it is a more well structured story and a powerful performance by Curtis.
2 people found this helpful
Report abuse

Lynn E. SykesReviewed in the United States on July 26, 2015
5.0 out of 5 stars
Flag of Our Fathers
Verified purchase
Flag of our Fathers is especially good because out is the brother to "Letters from Iwo Jima" Flag of our fathers is Iwo Jima from the American view and its aftermath. There is the horror of war with graphic seen that made me wince. This movie also brings to light that these individuals were just kids in their late teens and early 20's Hey I did not know that the photograph I am familiar was the 2nd flag raising. Its aftermath is informative sad and a little depressing. It is though a movie that all Americans can see. We have much to be grateful to these brave heroic men. We need to treat all our soldiers in uniform and veterans much better than we do at present and the past. Watch this movie and do not forget.
14 people found this helpful
Report abuse

Paul S. PersonReviewed in the United States on April 9, 2020
3.0 out of 5 stars
A Film About The Writing Of A Book
Verified purchase
This is a film about the writing of a book.
Of course, for all I know, that book might have been about the writing of the book -- as /Maus/ was.
But this makes it confusing and temporally disordered.
You see bits and pieces of the story, presumably as narrated to the author by his source, and are left to piece it together yourself.
This is /not/ great filmmaking. But it certainly is done quite well, in terms of money and time invested.
One person found this helpful
Report abuse
See all reviews
Back to top
Get to Know Us
Make Money with Us
Amazon Payment Products
Let Us Help You
EnglishChoose a language for shopping. United StatesChoose a country/region for shopping.
© 1996-2021, Amazon.com, Inc. or its affiliates