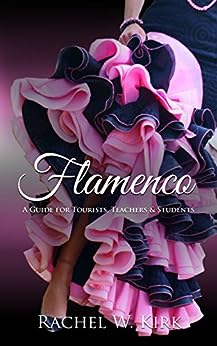 Andreea
5.0 out of 5 stars Flamenco: A Guide for Tourists, Teachers & Students by Rachel W. Kirk
Reviewed in the United States on August 8, 2018
Verified Purchase
“There will be one or two singers and one guitarist or two, as well. There will probably be three to six dancers, one of whom will be male. (...) Remember that pure flamenco is comprised of one dancer at a time, interpreting the song of one singer, accompanied by one guitarist.” ( Loc. 182-186)

In this short book, you are going to read about the art of flamenco, its origins and who influenced it, the three main elements of flamenco, instruments, what to expect during the show and so on. The author states that people who attend flamenco shows don’t know what to expect, what to look for and what to listen to. Therefore, the purpose of this guide is to introduce tourists to the culture of flamenco.

Flamenco is an art form known worldwide, specific to the Andalusian region of Spain and it comprises of three main elements: song (el cante), dance (el baile.) and music. Not all Spaniards think that this art is representative for their country, but the author traces the fascination for this culture back to the works of Miguel de Cervantes, Lope de Vega, Miguel de Unamuno, Pablo Picasso and so on. The origins of flamenco date back to hundreds or even thousands of years ago (according to some archaeological findings) and it’s mostly attributed to the Romani people who migrated from Pakistan to Spain, where they dealt with discrimination and oppression. Nevertheless, flamenco is only specific to Spain and its uniqueness may be the result of a combination of more ethnicities besides the Romanis because Spain was and still is a melting pot of cultures.

I won’t go into the rest of the book because I’ll let you discover more interesting facts about the three main elements of flamenco, what types of songs and themes are there, what instruments are used and how a show looks like. I highly enjoyed this short informative guide written in plain English and sprinkled with local terminology. The author goes step by step through every important part of the show, from the beginning to the end of the performance. She also lists the resources she used, at the end of the book
Read more
Helpful
Report abuse

Amazon Customer
5.0 out of 5 stars A Delight!
Reviewed in the United States on July 13, 2020
Verified Purchase
This book is an absolute delight to read and reread! Rachel Kirk completely immerses the reader in all facets of the Flamenco dance experience and culture. She gives us an inside view of not only what you will see when you attend a Flamenco show, but also the deeper meaning behind all of it, as well as the proper etiquette for the audience. This book makes me want to book a flight to Spain right now and experience it firsthand!
Read more
Helpful
Report abuse

Mary Bartnikowski
5.0 out of 5 stars Engaging and Colorful
Reviewed in the United States on May 3, 2015
Verified Purchase
Fantastic guide to flamenco! Makes you want to grab your dancing shoes and head to Spain. My feet were tapping as I read this, the writing is engaging and fun, if you are wanting to learn more about this sensuous dance and its history or you want to go to a show and understand what is happening you have to get this book.

I could not put it down.

Check it out now, and dive in!
Read more
One person found this helpful
Helpful
Report abuse

BajaLeslie
4.0 out of 5 stars Helpful for me!
Reviewed in the United States on June 18, 2014
Verified Purchase
I bought this short book to help me prepare a Powerpoint presentation about Flamenco music & dance. It was very helpful, even if it is a bit short. I enjoyed & learned about Flamenco from this concise, well-written book. I suppose it's a compliment that my only complaint is that I wish it were longer!
Read more
2 people found this helpful
Helpful
Report abuse

Einar Eldoy
4.0 out of 5 stars To the point
Reviewed in the United States on November 24, 2014
Verified Purchase
Very structured and to the point. A fine first introduction to flamenco, it's origin, districts, expressions and general setup of shows.
Read more
2 people found this helpful
Helpful
Report abuse

Kristine Frost
5.0 out of 5 stars I really enjoyed this book
Reviewed in the United States on September 8, 2015
I really enjoyed this book. It makes me want to take a class and learn how to dance the Flamenco. I would recommend it to anyone who wants to learn more about this fascinating subject.
Read more
Helpful
Report abuse
See all reviews
Back to top
Get to Know Us
Make Money with Us
Amazon Payment Products
Let Us Help You
EnglishChoose a language for shopping. United StatesChoose a country/region for shopping.
© 1996-2021, Amazon.com, Inc. or its affiliates