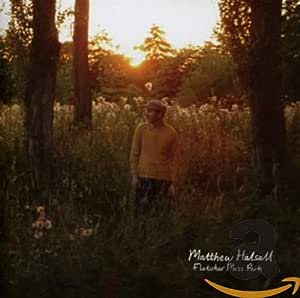 Share
In stock.
Usually ships within 2 to 3 days.
Add to Cart
Buy Now

Secure transaction
Your transaction is secure
We work hard to protect your security and privacy. Our payment security system encrypts your information during transmission. We don’t share your credit card details with third-party sellers, and we don’t sell your information to others. Learn more
Details
Ships from
SpeedyHen
Sold by
SpeedyHen
Have one to sell?
Sell on Amazon

Manchester based trumpeter, composer, arranger and band-leader Matthew Halsall is one of the rising stars of the UK jazz scene. His unique sound was brilliantly described as "Rain-streaked spiritual jazz from Manchester" by the Independent on Sunday and previous albums have found Halsall exploring the modal jazz of John and Alice Coltrane or paying heartfelt tribute to the hard bop of the late '50s and early '60s, but on Fletcher Moss Park he offers his most personal statement yet. Written and recorded over the last couple of years, Fletcher Moss Park is inspired by one of Manchester's most beautiful places. A rambling, multi-tiered park of walkways and dreamy gardens that offers the contemplative Halsall a place of peace and respite from the city, a meditative space to think and write in. The stillness and beauty of the surroundings have steeped into his beautiful compositions for this album. Elegant and sincere, Halsall's compositions draw on his love of spiritual jazz, modern dance music and even his work with the award-winning Brighouse & Rastrick Brass Band earlier this year. Halsall who has recently been exploring his music in a stripped-back, electronica influenced, trio (featuring Taz Modi and Luke Flowers who also appear here) as well as the 12 piece Gondwana Orchestra has always favored an earthy honestly and direct communication over tricksy arrangements and it is this deceptively simple openness that gives his music such a unique flavour as the young composer and producer seeks to express his feelings and thoughts with his music.

4.8 out of 5 stars
4.8 out of 5
51 global ratings
How are ratings calculated?
To calculate the overall star rating and percentage breakdown by star, we don’t use a simple average. Instead, our system considers things like how recent a review is and if the reviewer bought the item on Amazon. It also analyzes reviews to verify trustworthiness.
Top reviews

Chris
5.0 out of 5 stars Five Stars
Reviewed in the United States on July 3, 2018
Verified Purchase
Such a great album. I am never not happy to hear it.
Read more
Helpful
Report abuse

B. Waruna Gomis
5.0 out of 5 stars The Quiet Beauty of Life
Reviewed in the United States on May 14, 2016
Amazing Musicianship... Flowers Rocks it in the last song.... Damn Good
Read more
Helpful
Report abuse

Music Lover
4.0 out of 5 stars Elegant, Elegiac Lyricism
Reviewed in the United Kingdom on January 9, 2013
Verified Purchase
Originally released in October 2012 Manchester's Matthew Halsall has continued to explore and develop his understanding of Jazz, exhibiting a keen awareness of the genre's past greats (particularly Miles Davis and John Coltrane) whilst simultaneously (and knowingly) keeping an ear to the modern musical Jazz impulse, which often stretches out beyond the parameters accepted in certain quarters. 'Fletcher Moss Park' is the latest installment to document his developing musical sensibilities, building upon the earlier 'On The Go' (2011), 'Colour Yes' (2009) and 'Sending My Love' (2008).

'Cherry Blossom' opens with shimmering and swirling harp notes (Rachael Gladwin), lightly joined by caressing piano (Adam Fairhall), before the rising (and affirmative) trumpet emerges, issuing a call before retreating to allow a slowly progressive sway to take hold. Halsall's playing here is reminiscent of Miles Davis, with his often muted playing gently embracing the music around him. The musical space created is shared with his fellow players, creating a distinctly laid back vibe in which the listener can simply wallow. The title track 'Fletcher Moss Park' continues in a similar vein, again featuring the harp, before the bass (Gavin Barras) signals the descending and rising groove upon which to play. Again Halsall's playing is restrained, confident, yet never shouting for attention, reflected in the beautifully highlighted (and shared) solo playing. 'Mary Emma Louise' swings warmly, driven largely by the insistent playing of Gaz Hughes on drums. 'Sailing Out To Sea' is a short elegiac piece (less than two minutes), featuring cello (Adrianne Winnisky) and violin (Davinder Singh), quickly followed by 'Wee Lan (Little Orchid)', with broad string playing flowing over a sharply plucked musical edging. 'Sun In September' sounds (quite subjectively) part of a musical triptych (begun by 'Sailing Out To Sea'), with the alternative sonic soundscape extending far beyond Manchester. The set ends with 'Finding My Way', returning to a far more traditional articulation, yet hinting at the space occupied by Drum & Bass (largely suggested by the drum phrasing).

Recorded in April and June 2010 this is a relatively short set, length substituted by a concentrated lyricism, with Halsall settling in to short phrasing where notes are never wasted. The feel is light and airy, suggestive of a warm hazy Summer's evening shared with friends. Being rhythmically driven isn't the concern here, instead your ears are presented with a meditative and contemplative reflection in sound, an understated elegance of expression.

One to savor with repeated rewards.

Wilf 66
5.0 out of 5 stars Brilliant Chill-Out
Reviewed in the United Kingdom on July 9, 2013
Verified Purchase
This album is the most mellow and chilled set of instrumental work I have heard... probably ever!

There is an oriental feel to the backing on some of the tracks, complimented wonderfully by the trumpet.

Matthew Halsall's trumpet playing is precise and spare, he doesn't waste a single note. There is no technical showing off for its own sake, just some beutiful tunes and harmonious solos.

The highlight of the album for me is 'The Sun in September' which features a flute solo by Lisa Mallett played on bansuri or a similar bamboo instrument from the mellow sound and the way she can bend the tones. It was hearing this on Jazz FM that sent me searching for the album in the first place.

sasha
5.0 out of 5 stars Great album
Reviewed in the United Kingdom on August 17, 2018
Verified Purchase
Heard a track off this on Iggy Pops 6 music show & bought this CD on the strength of it. Wasn't disappointed - a great album for those chilled out moments. Arrived on time & well packaged.
Read more
One person found this helpful
Report abuse

Paul Devereux
5.0 out of 5 stars Not just for jazz lovers
Reviewed in the United Kingdom on March 16, 2016
Verified Purchase
This is a CD that I have already played many more times than other recent purchases. It is just so catchy and easy to listen to. Highly recommended for anyone, not just jazz lovers.
Read more
One person found this helpful
Report abuse
See all reviews

Page 1 of 1 Start overPage 1 of 1
Previous page
Next page
Pages with related products. See and discover other items: matthew good