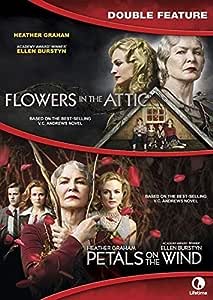 Flowers In The Attic/ Petals On The Wind - Double Feature [DVD]

Heather Graham (Actor), Ellen Burstyn (Actor) Rated:
NR
Format: DVD
4.7 out of 5 stars 147 ratings
Available at a lower price from other sellers that may not offer free Prime shipping.

FLOWERS IN THE ATTIC, based on the iconic bestseller, tells the gothic horror story of four siblings who are forced by their evil grandmother and weak mother to live in an attic, creating a surreal surrogate family with the two older siblings forming a forbidden bond with one another. PETALS ON THE WIND, based on the second book in V.C. Andrews best-selling FLOWERS IN THE ATTIC trilogy, continues to follow the twisted plight of the Dollanganger family as they attempt to put their sordid past behind them. But, as they soon discover, certain secrets cant be left behind.

4.7 out of 5 stars
4.7 out of 5
147 global ratings
How are ratings calculated?
To calculate the overall star rating and percentage breakdown by star, we don’t use a simple average. Instead, our system considers things like how recent a review is and if the reviewer bought the item on Amazon. It also analyzes reviews to verify trustworthiness.
Top reviews

Carol T.
4.0 out of 5 stars Good for binge watching
Reviewed in the United States on January 12, 2016
Verified Purchase
I’m not sure why I purchased the lot of all four of these films. I remember the book by V.C. Andrews coming out sometime in the 1970s and the first incarnation of the movie with Victoria Tenant and Louise Fletcher coming out in the 1980s. Flowers in the Attic is the first of the four (or was there one more – I can’t remember) novels and deals with some very uncomfortable topics (incest, for one) and the first film version somewhat whitewashed the more disturbing aspects of the novel. But even with the changes made to the original film version, it was still an extremely creepy, dark and gothic type of film.

I don’t know how Lifetime came to the decision to remake Flowers in the Attic to more closely reflect the novel as it was intended but here they are and this set contains the first two films: Flowers in the Attic and Petals on the Wind. Petals is the better film of the two (in my opinion) but that may be because I prefer (or am used to) the original film version of Flowers. One thing I’m sure of is that I think Victoria Tenant was better in the role of Corrine than Heather Graham, although Ellen Burstyn was just as good as Louise Fletcher as the evil grandmother. But the entire feel of the first Flowers film in narration, music, cinematography was just the right mix to evoke a feeling suited to the overall mood of the film.

The basic premise of the story, for those who are interested, is as follows: a single mom with four children must return to the family estate after her husband dies in an accident. Unable to support her children, she arranges for them to return to the place from which she had been cast out for marrying her uncle. In order for her to return, she must hide the children from her ailing father who will prevent her from inheriting the estate is he learns that the marriage produced children. So the kids are locked away in an upstairs bedroom with access to a large attic where they spend the next few years in isolation as if they had never existed.

With their mother’s reintegration into society and her addiction to the money and entitlement of the life, she takes steps to deal with her children so that they will never interfere with her life, with dire consequences. That’s all I’ll say.

I have to say that I found Heather Graham to seem too young and somewhat flippant to be a widowed mother of four. There was something that was just not quite right about and left the film wanting for me – the darkness was missing and Corrine was a bit too chirpy a character.

Petals on the Wind, on the other hand, brings back a bit of the mood that was missing in Flowers, but just a little. It begins 10 years after the three surviving children escaped the attic and were adopted by a childless doctor, whose passing has left them at odds. Without their adopted father, their memories of the time in the attic resurface and they must each find their way in life. Cathy is a dancer, Christopher is studying to become a doctor, and little Carrie struggles most of all with that sense of never having had a mother figure other than her sister Cathy. She also instinctually senses the attraction between her siblings. It’s all a very icky situation. As they all try and fail to create “normal” lives, another tragedy propels Cathy into revenge mode, again with dire consequences. Heather Graham and Ellen Burstyn return as their evil characters.

I don’t want to get into the details but I do want to say that despite this being the better film of the two, there is a rather campy feel to it in many places. Not exactly funny but not as dark as it should have been, considering.

Nonetheless, I felt like I had to have the set for nostalgia’s sake and so here they are in my collection – good for a rainy day of binge watching.

I kind of recommend these but watch at your own risk!

EricaMay
4.0 out of 5 stars Good but the original is better
Reviewed in the United States on April 30, 2016
Verified Purchase
I'm 28 years old and I still prefer the original over this one. But it was still good. The grandmother in this one is not nearly the villain that she is in the original. And it shows a lot more then the original where in that one the relationship between Christopher and Cathy was more suggested. Still a good movie though.
Read more
One person found this helpful
Helpful
Report abuse

Eva Wangler
5.0 out of 5 stars I would by from seller again
Reviewed in the United States on April 14, 2019
Verified Purchase
Very good movie
Read more
Helpful
Report abuse

Amanda B Carlson
5.0 out of 5 stars A+++++
Reviewed in the United States on May 7, 2019
Verified Purchase
A++++ Excellent packaging. Love the movies
Read more
Helpful
Report abuse

Amazon Customer
1.0 out of 5 stars these movies frees they are to good what a waist of money again
Reviewed in the United States on January 15, 2020
Verified Purchase
it freezes I bought these last time they freeze got some more freeze whatr a waist f my time ! highly disappointed it goes to half screen of one part haf a nother I will never buy these again ever
Read more
Helpful
Report abuse

Daniel Collins
3.0 out of 5 stars Not always faithful to the books
Reviewed in the United Kingdom on April 20, 2020
Verified Purchase
The service from the supplier was very good. This is a double-sided DVD which you need a multi-regional DVD player to access. This was clearly stated. As to the films themselves? 'Flowers in the attic' is the better of the two and more faithful to the book than the older (1987) film, which changes the ending. The 2014 version is a made for TV movie, which is not bad, but the book (not brilliant itself) is better. The film makes odd changes (why is the family led up the main staircase to begin their imprisonment, and the manner of escape is different too?) but the acting is fairly sound. You have to read the books, and especially the 1987 prequel 'Garden of Shadows' to understand the hostility of the Grandparents to the children. The acting is generally good, but the twins presence is token. There are always casualties when producing screenplays from such long books! The second film, 'Petals on the Wind' (on the reverse of the DVD) also dates from 2014, but is a much lesser affair, as it massacres the book. Cathy's career as a ballerina, for instance, is only hinted at. Helen Graham and Ellen Burstyn reprise their roles, but Kiernan Shipka (Cathy) and Mason Dye (Christopher Jr) are both replaced. This is the weaker of the two films: it gives the impression of having been rushed and the fire (there will be more of those to come, if you stick with the books!) is distinctly underwhelming. Very much 'Dynasty' (if you remember the TV series) than 'Bleak House'! You will derive greater pleasure from reading 'Petals on the Wind' (the writing is not that bad) than watching this film. Three stars for 'Flowers in the Attic', one for 'Petals on the Wind'.
Read more
Report abuse

Sandi Magee
5.0 out of 5 stars Flowers in the attic/Petals on the wind.
Reviewed in the United Kingdom on March 28, 2017
Verified Purchase
A very dark story of forbidden love. The characters were believable, albeit, some of them were not very nice. The retribution brought by the wronged children brought the whole story to a cataclismic ending. Top marks for the actress which played the bitter grandmother.
Read more
One person found this helpful
Report abuse

Lesley ferriday
1.0 out of 5 stars Be carful when ordering this item
Reviewed in the United Kingdom on November 4, 2017
Verified Purchase
I ordered this item and did not know that reagion 1 meant amarican, it would not play on any DVD players and it looked like a copy which it did not state that was what it is , iv not bothered to return it because it would prob cost me as much as the dvd did , very disappointing
Read more
Report abuse

david low
2.0 out of 5 stars If ordered in uk should be british formate
Reviewed in the United Kingdom on April 29, 2018
Verified Purchase
The format is Canadian not british can not watch it in the uk
Read more
Report abuse
See all reviews

Page 1 of 1 Start overPage 1 of 1
Previous page
Next page
Pages with related products. See and discover other items: ellen burstyn