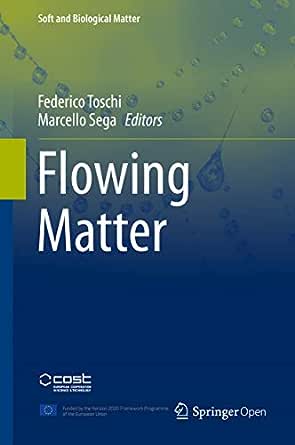 Flip to back Flip to front
Audible Sample Playing... Paused   You are listening to a sample of the Audible narration for this Kindle book.
Learn more
ISBN-13: 978-3030233693
ISBN-10: 3030233693
Why is ISBN important?
ISBN
This bar-code number lets you verify that you're getting exactly the right version or edition of a book. The 13-digit and 10-digit formats both work.

This open access book, published in the Soft and Biological Matter series, presents an introduction to selected research topics in the broad field of flowing matter, including the dynamics of fluids with a complex internal structure -from nematic fluids to soft glasses- as well as active matter and turbulent phenomena.

Flowing matter is a subject at the crossroads between physics, mathematics, chemistry, engineering, biology and earth sciences, and relies on a multidisciplinary approach to describe the emergence of the macroscopic behaviours in a system from the coordinated dynamics of its microscopic constituents.

Depending on the microscopic interactions, an assembly of molecules or of mesoscopic particles can flow like a simple Newtonian fluid, deform elastically like a solid or behave in a complex manner. When the internal constituents are active, as for biological entities, one generally observes complex large-scale collective motions. Phenomenology is further complicated by the invariable tendency of fluids to display chaos at the large scales or when stirred strongly enough. This volume presents several research topics that address these phenomena encompassing the traditional micro-, meso-, and macro-scales descriptions, and contributes to our understanding of the fundamentals of flowing matter.

This book is the legacy of the COST Action MP1305 “Flowing Matter”.

Federico Toschi is full Professor at the Eindhoven University of Technology where holds the chair of Computational Physics of Multi-scale Transport Phenomena in the department of Physics and in the Department of Mathematics and Computer Science.  His current research interest is the statistical physics of complex systems, at the crossroad between complex flows, complex fluids, and active matter. His research activity is based on experiments, observations and, primarily, state-of-the-art large-scale, high-fidelity numerical simulations. His research is embedded in the  4TU Centre of Excellence for Multiscale Phenomena and in the JMBC Burgerscentrum for fluid dynamics, the Eindhoven Multiscale Institute. Toschi has been awarded a number of large scale computational grants (DEISA Extreme Computing Initiative, PRACE). He has been promoting sharing of raw research data, founding the International CFD Database hosted at CINECA (Bologna, Italy), and contributing to establish the Turbase database. He served as chairman of the International Collaboration for Turbulence Research (ICTR, http://www.ictr.eu). He acted as Chair of the COST Action MP0806 on "Particles in turbulence" and is currently chair of the COST Action MP1305 "Flowing matter".
--This text refers to the hardcover edition.