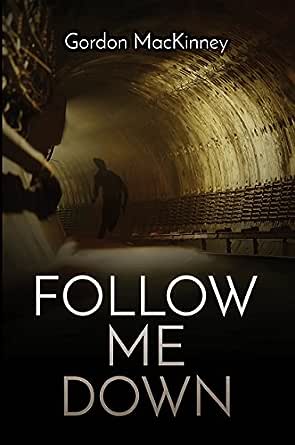 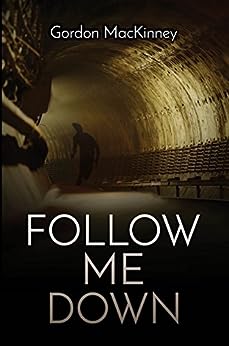 "In this well-researched thriller, urban explorers descend into deep trouble when they uncover the buried crimes of a corrupt company. MacKinney keeps us turning the pages." -Patricia Stoltey, author of The Prairie Grass Murders

"This smart psychological thriller pulls readers into the fascinating world of urban exploration. MacKinney is a new author to watch." -Secrets of Best-Selling Authors, www.KatherineValdez.com

"A thriller indeed, but also a love story, between father and son, and between Lucas and a young woman willing to risk everything. Follow Me Down will keep you up at night and stay with you long after the final page." -Kenneth W. Harmon, author of Upon the Stage of Time

Gordon MacKinney is a decade-long monthly columnist for the Fort Collins Coloradoan and Denver Post newspapers. He holds an MBA degree from the Harvard Business School and an undergraduate degree from Miami University of Ohio. He co-owns a marketing communications agency, www.lightsourcecreative.com. --This text refers to the paperback edition.

4.4 out of 5 stars
4.4 out of 5
164 global ratings
How are ratings calculated?
To calculate the overall star rating and percentage breakdown by star, we don’t use a simple average. Instead, our system considers things like how recent a review is and if the reviewer bought the item on Amazon. It also analyzes reviews to verify trustworthiness.
Top reviews

Michael P. Hartnett
5.0 out of 5 stars Secrets Rise from the Depths
Reviewed in the United States on November 13, 2017
Verified Purchase
Near the end of Follow Me Down by Gordon MacKinney delivers a moment of ordinary in this extraordinary novel: “I took Tricia’s hand in mine, squeezed to quell her trembling, and turned to stare out the window. The owner of the news kiosk wiped down a metal countertop. A deliveryman in white overalls shouldered a case of tomatoes into a Greek restaurant. A city worker with a push broom waved toward a second story window. So normal, but nothing felt normal.”
Indeed, nothing feels normal for the reader either as MacKinney takes the reader down into the abandoned Cincinnati subway system to unearth a nefarious history that rests below the surface. MacKinney’s uses the journeys of his narrator Lucas to serve as an allegory for both the psychic and physical secrets buried beneath the city streets. Lucas’s urban explorations are borne from the tragic loss of his father, his tutelage under the legendary photographer Alfred Blumenfeld, and his abiding loyalty to the city’s architectural legacy.
An engaging narrator, Lucas seethes with anger toward the downright evil Drax Enterprises, often undermining his ability to coolly gather evidence against their corrupt operations. The sage advice of legendary urban explorer N. Jefferson Chapel reverberates in Lucas’s head like a wily Superego as our narrator appreciates its wisdom yet refuses to follow. Lucas’s impulsive bluntness fills Follow Me Down with irony, amusement, and lively exchanges of dialogue.
Lucas’s explorations in the long sealed off Cincinnati subway tunnels pullulate with excitement and revelations as he must endanger the few people he cares about while confronting three generations of Drax leaders, their brutal security agents, and a dark past long entombed. MacKinney has plotted this novel well and his attention to detail of the city’s surface and below it give Follow Me Down layers and surprising resonances.
For me, the best novels introduce the readers to hidden places and ideas that have yet to be fully explored. Follow Me Down offers such pleasures and an opportunity to rethink my notions of the urban landscapes around and below us, to reconsider the foundations onto which they’ve been built. Given its dynamic plot, terrain, and intellect, Follow Me Down is a terrific read.

Jeffrey Cochrane
3.0 out of 5 stars Interesting
Reviewed in the United States on April 15, 2018
Verified Purchase
I liked the premise of sneaking around forbidden places. Also liked the architectural details. The basic problem I had with the book was the main character. I understand where he was coming from but he had such tunnel vision and was stuck on one spot that he ignored everything else. That distracted too much for my liking. Finally he seemed to change but it was too little too late.
Read more
11 people found this helpful
Helpful
Comment Report abuse

Pat Stoltey
5.0 out of 5 stars Well-paced and exciting
Reviewed in the United States on December 7, 2017
Verified Purchase
I had the privilege of critiquing an early draft of Gordon MacKinney's debut thriller. It's not only a well-paced and exciting novel of crime and danger, but is also an education in something I'd never heard of before: urban exploring. Whether old abandoned public buildings, boarded-up basements and tunnels, or closed factories, a wealth of opportunities exist for those who seek interesting subjects for photography or, even more exciting, to find out what might be buried or hidden from the public. The characters are varied and interesting and the writing excellent.
Read more
6 people found this helpful
Helpful
Comment Report abuse

Rorym
5.0 out of 5 stars Wonderful read
Reviewed in the United States on January 12, 2018
Verified Purchase
Great book. Stayed up late to finish it. Although the book covers a relatively short period of time, there is excellent character development. The protagonist is flawed but very likeable. The antagonist is deplorable and unlikable. The book has an excellent premise, the exploration of urban "caves" and spelunking in those caves, in this case an uncompleted and abandoned subway system under Cincinnati. I checked the internet, such a system does exist. I was unaware of this even though I graduated from the same university as the author. My only criticism is that the end may be drawn out. I heartily recommend this book; it kept me interested the whole way.
Read more
5 people found this helpful
Helpful
Comment Report abuse

kybookworm
5.0 out of 5 stars A thriller set in 1973 Cincinnati
Reviewed in the United States on April 12, 2020
Verified Purchase
I bought this book for a couple of reasons: it sounded like a good thriller and it’s set in 1973 Cincinnati. I was born in Cincinnati, raised in the western side of the county, and lived in Cincinnati in the sixties, so I thought I would enjoy reading a story set there near the time period I was a resident. I wasn’t wrong.

The story involves a young man, Lucas Tremaine, who works for a photographer while pursuing his master’s in architecture. His mother works information at Cincinnati Bell and is gradually withdrawing from a dependence on benzodiazepines. She’d gotten hooked on them after her husband, Lucas’s father, was killed on a construction site operated by Drax Enterprises, a company that has its hooks set deep in the county political system. Lucas and his mother are sure that his father’s death was due to negligence on the company’s part, but before the story in Follow Me Down begins, they’ve lost a lawsuit. Drax’s attorneys fabricated stories alleging his father was drinking on the job (even though he didn’t drink).

Lucas escapes from his own depression by urban exploring with his friend, Reuben. They’re very good at getting into off-limits places, and one day the photographer, an elderly Jewish man named Alfred, approaches Lucas about getting into Cincinnati’s subway system that was started in the early 1920’s and abandoned during the Great Depression. He wants Lucas and Reuben to take measurements that a friend of his will use to prove that Drax, the subway’s builders, cut corners and bilked the city and county out of money. Alfred and a reporter he worked with had tried to prove that in the past, and they’d also tried to expose Drax’s support of the Third Reich during WWII. The reporter disappeared, and Alfred believes Drax had him killed. The ruthless CEO and his son, one of Lucas’s former high school classmates and a bully, will stop at nothing to prevent their empire from threat. And so the fun begins.

This is a story based partly on fact. The subway was started and abandoned, but there is no such company as Drax and no indication that anyone cut corners building it. In fact, much of the subway still exists today with its entrances either concreted in or gated over. But it makes for an enjoyable and exciting read whether you know the city or not.
Read more
Helpful
Comment Report abuse
See all reviews

Frank
5.0 out of 5 stars Superb
Reviewed in the United Kingdom on January 14, 2018
Verified Purchase
Is it a novel or is it true? The description of exploring old buildings is as if it comes from someone who has being doing it for years. It is both a mystery and a thriller. It is difficult to put down and beautifully written. It is the best ebook I have read.
Read more
5 people found this helpful
Report abuse

MissusB
5.0 out of 5 stars Brilliant story
Reviewed in the United Kingdom on December 19, 2019
Verified Purchase
I am not into photography but even I got carried away in the detail. The exploits of this very special young man and his friends.....what a tale. I would recommend this as good reading in a heartbeat. Very well written. Six stars!!!
Read more
Report abuse

Izzy Fulton
5.0 out of 5 stars Need a Follow Up
Reviewed in the United Kingdom on May 6, 2020
Verified Purchase
Loved the story, great characters and an interesting subject, well written, the underground descriptions were brilliant, made me want to go there, I will be watching closely for another book by the author.
Read more
Report abuse

Kindle Customer
4.0 out of 5 stars Enjoyable read. Good interesting plot
Reviewed in the United Kingdom on December 6, 2019
Verified Purchase
Good read . Plenty of twists in the plot, and some good characterisation. Would definitely read more by this author. Made me want to find out more about the stations mentioned
Read more
Report abuse

Kindle Customer
4.0 out of 5 stars A little different in a very good way
Reviewed in the United Kingdom on December 13, 2019
Verified Purchase
Well written and intriguing, good v bad but in an unusual setting. Well defined characters held my attention throughout, although the main character needed a slap now and then.
Read more
Report abuse
See all reviews