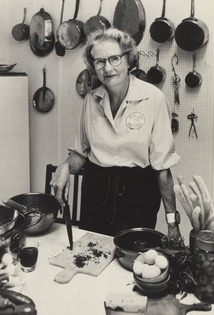 In 1911, seven-year-old Beck (coauthor of Mastering the Art of French Cooking ) made her first roux ; 20th-century French cooking hasn't been the same since. In this memoir cowritten with Patterson, she tells her life story both as a gourmet and as a woman. Beck begins at Rainfrevillesic , the comfortable family house where her kitchen experiments began. An unfortunate marriage at 19 in Paris led to divorce and Beck's introduction to a man sporting a "badly tied bow tie"--Jean Fischbachersic , who would become her second husband. Following World War II, she grew interested in writing "a valid cookbook for Americans" about French cuisine. An editor's advice to find a collaborator resulted in her fruitful association with the wife of a U.S. government official--Julia Child. Despite the many pages devoted here to the culinary art, Beck's book is essentially the love story of "Simca" and Jean, and this story is less compelling than might be expected. Her recipes, however, do transcend--be it in the combination of strawberries, currants and lime juice for a timbale aux fruits rouges or the sorrel, parsley and creme fraiche for soupe a la Suraile . Perhaps it is too much to ask that the memories in Food and Friends uplift like the recipes; the recipes alone are a gift. Illustrations not seen by PW.
Copyright 1991 Reed Business Information, Inc.

A delightful book from the coauthor of Mastering the Art of French Cooking (Knopf, 1983. 2d ed.) and author of Simca's Cuisine (Knopf, 1972, o.p.) and New Menus from Simca's Culture (HBJ, 1979, o.p.). Beck is perhaps best known in this country as Julia Child's collaborator, but her own cookbooks further established her reputation and, now in her 80s, she continues to receive students from all over the world at her farmhouse in the south of France. Here she reminisces about her privileged childhood and unfortunate first marriage, happily followed by nearly 50 years of marriage to her "dear Jean," the deprivations and tragedies of life in World War II France, and the "landmark" and "fruitful years," when she discovered her talent and vocation for cooking. Her memoirs are, of course, accompanied by her wonderful menus to mark occasions of all sorts, with a bonus section of other favorite dishes. An essential purchase.
Copyright 1991 Reed Business Information, Inc.

Loretta Michalczak
5.0 out of 5 stars More than just a cookbook
Reviewed in the United States on March 21, 2013
Verified Purchase
I had the privilege of studing with Simca in her home in Southern France. This book brought back many fond memories of some wonderful dinner parties. The recipes are easy to follow and show the warm hospitality of true French entertainment.
Read more
7 people found this helpful
Helpful
Comment Report abuse

Sally A. LarhetteTop Contributor: Cooking
4.0 out of 5 stars incredible stories about German occupation of her mothers beautiful estate
Reviewed in the United States on March 1, 2013
This book of recipes includes stories as interesting as the food, if not more so.Simone Becks mother owned
a staffed estate that was confiscated by the German Occupiers at that time. The Mom was fearless and very feisty,
and demanded some of their rights back, including a room to sleep in, sparsely furnished until they crept downstairs
when the Germans were sleeping, and retrieved a few of their treasures....totally amazing.

Miss Anne M Robertson
5.0 out of 5 stars fab book
Reviewed in the United Kingdom on March 1, 2017
Verified Purchase
As I love Simone Beck and Julia Child so this book had to be purchased and it fits the part perfectly. Beautiful recipes and love the originality of it. Still relevant all these years later.
Read more
Report abuse

Charles P. Galan
5.0 out of 5 stars Great find
Reviewed in Canada on January 17, 2017
Verified Purchase
Loved the combination of recipes and history.I now have all three of her books. Not as well known as she should be but hard when you're on the same ticket as Julia Child.
Read more
Report abuse

Eileen M. Conway
5.0 out of 5 stars "the other side of the story"
Reviewed in Canada on May 1, 2014
Verified Purchase
A fun read as well as an instructive cookbook -- offers lovely insight into the relationship among Julia Child, Simone Beck and Louisette Bertholle -- and is incidentally quite funny!
Read more
Report abuse

Page 1 of 1 Start overPage 1 of 1
This shopping feature will continue to load items when the Enter key is pressed. In order to navigate out of this carousel please use your heading shortcut key to navigate to the next or previous heading.
Back
Next
Pages with related products. See and discover other items: food memoir