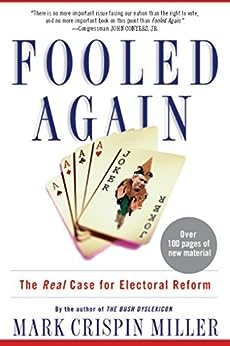 Fooled Again: How the Right Stole the 2004 Election and Why They'll Steal the Next One Too (Unless We Stop Them) Kindle Edition

by Mark Crispin Miller (Author) Format: Kindle Edition
See all formats and editions
Sorry, there was a problem loading this page. Try again.
For Republicans, the 2004 presidential election was little short of miraculous: Behind in the Electoral College tally in the days leading up to the election, behind even on the very afternoon of the vote, the Bush ticket staged a stunning comeback. The exit polls, usually so reliable, turned out to be wrong by an unprecedented 5 percent in the swing states. Conservatives argued-and the media agreed-that "moral values" had made the difference. In his new book renowned critic and political commentator Mark Crispin Miller argues that it wasn't moral values that swung the election-it was theft. While the greatest body of evidence comes from the key state of Ohio-where the Democratic staff of the House Judiciary Committee found an extraordinary onslaught of Republican-engineered vote suppression, election-day irregularities, old-fashioned intimidation tactics, and illegal counting procedures-similar practices (and occasionally worse ones) were applied in Florida, Oregon, Pennsylvania, New Mexico, Nevada, Arizona, and even New York. A huge array of anomalies, improper practices, and blatant violations of the law all, by a truly remarkable coincidence, happened to swing in the Bush ticket's favor. This pattern-not one overwhelming fraud but thousands of little ones-is, in Miller's view, the new Republican electoral strategy. This incendiary new book presents massive documentation that the election was stolen and describes the mind-set, among both the major parties and the media, that could permit it to happen again.
Read more
Previous page
Next page

In this belated exposé—and clarion call for electoral reform—Miller (The Bush Dyslexicon) accuses George W. Bush and his "theocratic militants" of orchestrating electoral fraud to "hijack" the 2004 presidential race. Miller relies on original reporting, secondary sources and unadulterated outrage to make his case, marshaling evidence (much of it circumstantial) of Democratic voter disenfranchisement, mysterious computer snafus and discrepancies between exit poll results and official vote counts. He is especially critical of the press for what he describes as silence in the face of Bush's and Cheney's denials of fraud. Democratic presidential candidate John Kerry is another target of Miller's ire, for ignoring warnings of coordinated Republican plans to cheat and for doing nothing to contest the vote counts, especially in swing states Ohio and Florida. "Election-stealing" in Florida in particular presages a dark future for the entire nation: "a system built specifically to disenfranchise an aroused and even militant majority, and to do so without leaving any traces." Though Miller's sometimes unclear sourcing puts the burden on readers to separate fact from hearsay, he gathers enough well-documented evidence that anyone who cares about fair play should find this book revelatory. (Nov.)
Copyright © Reed Business Information, a division of Reed Elsevier Inc. All rights reserved. --This text refers to an alternate kindle_edition edition.

Mark Crispin Miller is a professor of media studies at New York University and a well-known public intellectual. His writings on film, television, propaganda, advertising, and the culture industries have appeared in numerous journals and newspapers, including The Nation and the New York Times. He is the author of The Bush Dyslexicon: Observations on a National Disorder (2001) and Cruel and Unusual: Bush/Cheney's New World Order (2004). A frequent commentator on TV, radio, and the Internet, Miller has appeared on "Frontline," "The PBS Newshour," "The O'Reilly Factor," "Washington Journal," and Bill Moyers's "The Public Mind," as well as many other television shows, and has been a guest on countless radio programs. He is a regular commentator on Air America, appearing often on "Morning Sedition" and "The Al Franken Show." He lives in New York City. --This text refers to an alternate kindle_edition edition.

Mark Crispin Miller is Professor of Media, Culture and Communication at New York University. He is the author of several books, including 'Boxed In: The Culture of TV;' 'The Bush Dyslexicon: Observations on a National Disorder;' 'Cruel and Unusual: Bush/Cheney’s New World Order' and 'Fooled Again: The Real Case for Electoral Reform.' He is also the editor of 'Loser Take All: Election Fraud and the Subversion of Democracy, 2000-2008.' His essays and articles have appeared in many journals, magazines and newspapers throughout the nation and the world, and he has given countless interviews worldwide.

Josh Mitteldorf
5.0 out of 5 stars Well written, well documented, scary, hopeful
Reviewed in the United States 🇺🇸 on December 2, 2005
Verified Purchase
How is it that the carefully-researched, meticulously-documented, copiously-footnoted works of Administration critics are dismissed as madness, while the unsupported, categorical rhetoric of Administration supporters is accepted as common wisdom?

Miller is a clear and convincing writer. He's done his homework, and he makes a powerful case, calling the legitimacy of the Bush White House into question. This is a story that has been woefully neglected, even by the 'liberal' arm of the US press. It has been told piecemeal by internet bloggers and non-profit websites. In Europe and New Zealand (!) the story of the election heist of 2004 has been reported by the commercial press, and is common knowledge. But in America, it has been considered slightly loony to question the integrity of our electoral machinery.

'Fooled Again' may just prove to be a turning point for the conventional wisdom. What Miller has done with this book is far more than to document anecdotes of election fraud and put them in perspective. He paints for us a coherent picture that I, for one, have understood for the first time after reading his work. I had been familiar with the economic analysis of right-wing politics - the growing power of multinational corporations, the lobbyists and the PACS, and their dominance in setting our government's agenda. It had seemed to me to be the work of a distant, inaccessible money machine.

Miller adds a psychological perspective, making the actions of the power-grabbers very tangible, comprehensible and real. The subversion of our democracy was planned for decades by people who are not so much evil as afraid, and no more dishonest with us than they are with themselves. If the methods with which they push their agenda seem deceptive, autocratic and draconian, it is because they perceive their situation (and ours) to be desperate.

One weakness of the book is that it focuses exclusively on anecdotal evidence for election theft. There is another half of the story which is told by numerical evidence. The widespread statistical anomalies in the 2004 election provide a context for the anecdotes, so that they cannot be dismissed as isolated aberrations. The statistical story will be told in a forthcoming book by Steve Freeman.

Since November '04, I had been a follower of the internet dialogs about election fraud, and a minor contributor to the statistical analysis. I have found Miller's book to be empowering: He offers us a context in which we might hope to organize a new movement for electoral integrity, setting the system aright before it becomes entrenched.
Read more
39 people found this helpful
Helpful
Report abuse

John Sullivan
4.0 out of 5 stars Great Coverage of the voter fraud and intimidation in 2004 but what about the software aspect?
Reviewed in the United States 🇺🇸 on March 2, 2006
Verified Purchase
Well, this is a fast read and I expect a fast write! It has come out in a timely fashion
and I found it useful in explaining to my father some of what has gone wrong in this country re: vote-fraud. The anecdotes are excellent, not least in that they cover the whole nation, not just the most outrageously fraudulent vote in the state of Ohio; but I think we need more than outrage at anecdotes to get the terrible touch-screen DRE machines out of this country's system. People on the right will always argue that the republican intimidation
tactics and dirty tricks, while heinously wrong, were within the margin of Bush's victory. In order for voting to be at all fair we must have paper ballot/optical scan machines in case of the need for a recount. Jimmy Carter said the U.S. voting system isn't even good enough to be worth monitoring. I monitored in Albuquerque, NM in 2004 and I have to agree. PS: In my later review of Greg Palast's Armed Madhouse, I decide that the racial and class discrimination, aside from DRE's, was beyond the margin after all. So I raise this one to five stars.
Read more
16 people found this helpful
Helpful
Report abuse

John Bonavia
5.0 out of 5 stars Powerful analysis of the extreme Republicans' mindset
Reviewed in the United States 🇺🇸 on March 12, 2006
Verified Purchase
Most reviews have focused on the appalling lists of Republican dirty tricks in the 2000 and 2004 elections (mostly the latter) in this book, but I think perhaps the greater value is in Miller's clear description of the paranoid, cult-like mindset of these people. Although they utter many untruths, they are not always lying - it seems likely that many have convinced themselves of their fanatical nonsense and are able to genuinely ignore inconvenient facts. But whether they are simply blindly obsessive, or cynical and duplicitous (as some certainly are) the danger to the republic is the same.

And Miller rightly blasts the media for their lack of attention to all this. This may be changing somewhat, as events like Katrina have made the scales fall from some eyes: but not enough.

If there is one fault to find with Millers's review of media attitudes, it is that he gives a lot of attention to what the Press did or didn't print - lots of chapter and verse - rather less for TV and radio. But TV and radio - sorry, all you folks who love to read - have, for the majority of our population, about fifty times the impact of anything that may appear in newspapers. The Press sins largely (though not only) by omission - not covering something, not following up. But TV - and even more so, talk radio - are into heavy-duty sins of commission, spreading misinformation and bias overtly hour after hour, day after day. No wonder we're in the state we're in. Recovery will not be easy.
Read more
32 people found this helpful
Helpful
Report abuse
See all reviews
Report an issue
Does this item contain inappropriate content?
Report
Do you believe that this item violates a copyright?
Report
Does this item contain quality or formatting issues?
Report