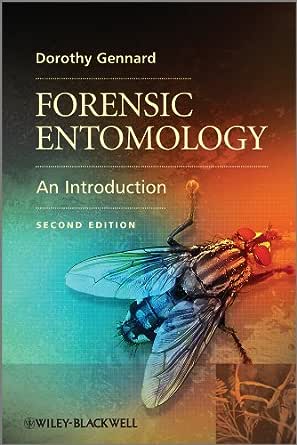 Flip to back Flip to front
Audible Sample Playing... Paused   You are listening to a sample of the Audible narration for this Kindle book.
Learn more
ISBN-13: 978-0470689028
ISBN-10: 0470689021
Why is ISBN important?
ISBN
This bar-code number lets you verify that you're getting exactly the right version or edition of a book. The 13-digit and 10-digit formats both work.

“The clarity and accessibility of the text is more thanadequately geared for undergraduate students, who will appreciatethe practical tasks and perhaps even the suggested reading. . . Theillustrations will fill in gaps for readers who are more interestedin other branches of forensic science than in entomology, makingthis book a good fit for general forensic sciencedegrees.”  (African Entomology, 1 October 2013)

Forensic Entomology provides undergraduates with a concise introduction to the subject. The book is written with the clarity necessary for students starting out in entomology yet authoritative enough to prove useful for more experienced researchers.

Worked examples of the necessary mathematics, including how to use excel to process data, coupled with lab protocols and self-assessment questions make the book an essential starting point in the subject.

Assuming little prior knowledge of either biology or entomology the book provides information on identification, life cycles and ecology of insects presented in a forensic context. Information is conveyed in an accessible style with practical tasks and suggestions for further reading included in each chapter.

Dr Dorothy Gennard is a principal lecturer in Forensic Science and co-ordinates the Forensic Entomology and Examination of Questioned Documents units. She is a member of the Royal Entomological Society and the World-Wide Dragonfly Association and a trustee of the British Dragonfly Society. Dr Gennard has close contact with the Lincolnshire Police Force and runs Forensic Entomology courses for the police and commercial forensic science companies.

Forensic Entomology provides undergraduates with a concise introduction to the subject. The book is written with the clarity necessary for students starting out in entomology yet authoritative enough to prove useful for more experienced researchers.

Worked examples of the necessary mathematics, including how to use excel to process data, coupled with lab protocols and self-assessment questions make the book an essential starting point in the subject.

Assuming little prior knowledge of either biology or entomology the book provides information on identification, life cycles and ecology of insects presented in a forensic context. Information is conveyed in an accessible style with practical tasks and suggestions for further reading including in each chapter.

Christy Garman
5.0 out of 5 stars Five Stars
Reviewed in the United States on July 2, 2015
Verified Purchase
on time and as advertised
Read more
Helpful
Report abuse

First, this is formatted as a textbook for classroom use and is not intended for casual reading. Second, it is fairly basic in laying out the keys to the involved insects and providing the concepts needed to establish time of death, etc. University programs in the United States tend to sort into skimpy undergraduate programs and more hefty masters-level programs. This text is used more for the former. And third, the first and last chapters reflect that this is written in the context of the United Kingdom and European form of courtroom law, and U.S. law comes from a different tradition as I will detail below. While the sciences of entomology and thermodynamics are universal worldwide, the context in which the evidence is collected is different under different legal traditions, and this echoes even behind the middle chapters that address insect biology.

Chapter 1 addresses the scope of forensic entomology and provides a brief and scanty history in the European context. An allusion is made to the National Research Council in U.S. "Strengthening Forensic Science in the United States: A Path Forward" (2009) but it is not referenced in the end-of-book or end-of-chapter web sites. Unmentioned is that the great surge of interest in forensic entomology in the United States accompanied the appearance of television action shows that generated student interest.

Chapter 3 covers the use of insects as indicators of "time of death" and addresses the decompsoition of the body under various circumstances.

Chapter 4 focuses on the identification of those flies that are important in forensic entomology. This extends to a brief mention of other insect orders including some that are involved in aquatic cases, and the preparation of whole mount slides.

Chapter 5 provides a key for the identification of adult European and Mediterranean blowflies. While the techniques for using a key are similar to American species, the species are not all the same.

Chapter 6 addresses the various carrion beetles that move in to decomposing bodies, and provides a key.

Chapter 7 focuses on the equipment and sampling techniques used at the crime scene, both terrestrial and aquatic, and discusses how to obtain meteorological data at the scene since the growth rates of invertebrates vary with ambient temperature.

Chapter 8 describes rearing techniques for flies and beetles. In addition to sampling and preserving maggots and grubs at the science, some are usually reared to the adult stage because larval stages are very difficult to identify with certainty.

Chapter 9 deals only with calculating the post mortem interval which also must take into considerations factors beyond ambient temperature.

Chapter 12 discusses decomposition in the aquatic environment as well as culturing aquatic larvae and use of algae in determining PMI..

Chapter 13 ends by discussion the role of the forensic entomologist in court. This is completely set in the context of the British style court system which varies considerably from the U.S. adversarial system. In the U.S., the forensic entomologist would work under the direction of the law enforcement and prosecutor's office, the defendant would be able to hire their own expert, and the judge would sit mostly silent as a referee of this debate. However, the role of the forensic expert in European courts, the code of practice and the courtroom presentation is different. In their system, the judge actively participates in the search for truth, and the forensic experts are provided detailed charges and report directly to the court. This also changes the tone and setting for much of the prior chapters that present science. To get a fuller appreciation of this change in judicial context, I would suggest John W. Head's Great Legal Traditions text comparing civil and common law systems.

Gennard's book is being used widely in the United States but primarily in lightweight undergraduate forensic science programs where supplemental readings can be used to substitute for Chapter 13 and reset the context of the rest of the book.
Read more
3 people found this helpful
Helpful
Report abuse