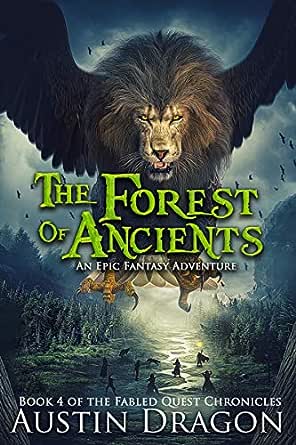 You've subscribed to Fabled Quest Chronicles! We will preorder your items within 24 hours of when they become available. When new books are released, we'll charge your default payment method for the lowest price available during the pre-order period.
Update your device or payment method, cancel individual pre-orders or your subscription at
Your Memberships & Subscriptions
There was an error. We were unable to process your subscription due to an error. Please refresh and try again. 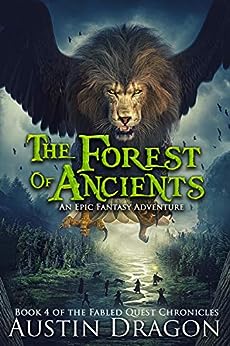 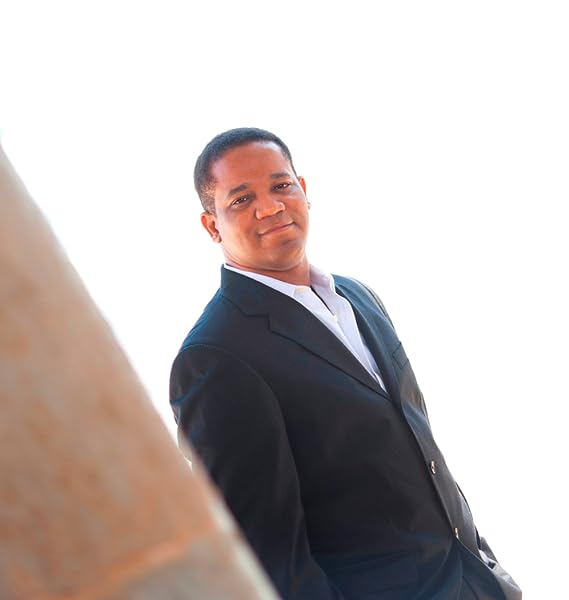 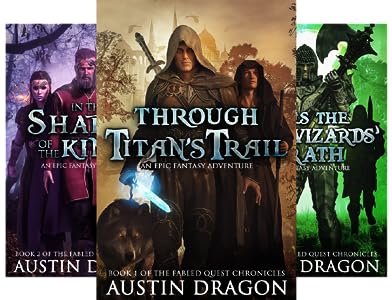 4.8 out of 5 stars
4.8 out of 5
9 customer ratings
How does Amazon calculate star ratings?
Amazon calculates a product’s star ratings based on a machine learned model instead of a raw data average. The model takes into account factors including the age of a rating, whether the ratings are from verified purchasers, and factors that establish reviewer trustworthiness.
Top reviews

TomB
5.0 out of 5 stars Builds up the tension
Reviewed in the United States on August 3, 2020
Verified Purchase
Wow, what an entirely entertaining series the Fabled Quest Chronicles continues to be! Mr. Dragon has such a vast imagination, that this magical quest has more than enough wonder to live up to its name. Book 4 in the chronicles told in real time so no surprise it picks up after previous events. If you thought some (all) of the fantastical events of their journey through the lands of Fae where a struggle, you are not properly prepared for the Ancient Forest portion of the trek. No spoilers, so let us simply say it is epically challenging. So many overwhelming forces are set against Titans Caravan and Traveller himself, even before you throw in the Giant Forests dangers, one truly ponders how it will all end. Filled with more frightening and impressive creatures than all previous books, but, this time giant in size.
Through it all their Quest Master Traveller is determined not to fail. Titans Caravan will make it to Atlantea as promised, but first... A fantastic entry in the series it has everything we love about the first few books, action, mystery, epic beasts and more new memorable characters. Read and enjoy!
Read more
Helpful
Comment Report abuse

Liberrian
5.0 out of 5 stars Adventure Awaits
Reviewed in the United States on June 3, 2020
Verified Purchase
The caravan has finally made it to the Great Forest where danger awaits both day and night. Although the giant animals and insects are rife, they are not the greatest worry Traveller has. Instead, he has to try to understand what the Four Kings (and, other possible foes) have up their sleeves. An action packed, adrenalin pumping, adventure awaits for those who follow on Titan's Trail.
Read more
Helpful
Comment Report abuse

rayd
5.0 out of 5 stars the journey continues with flair!
Reviewed in the United States on May 4, 2020
Verified Purchase
Many new monsters and characters enough suspense on what could befall the caravan next. Mr. Dragon has made the characters believable and interesting while weaving an epic story of bonding among fellow travelers and their need to assist each other looking beyond their differences.
Read more
Helpful
Comment Report abuse

Amazon Customer
5.0 out of 5 stars The best one yet
Reviewed in the United States on June 12, 2020
Verified Purchase
Book 4 adds the deeper layers to the Quest i was hoping for. The authors imagination continues to delight through every page. This is just good time escape fantasy, bring on Book 5!
Read more
Helpful
Comment Report abuse

Austin Dragon is a maestro of mysticism and magic with his arc of works gloriously ranging from the noir futuristic Liquid Cool to the spooky Sleepy Hollow stories.
However, my favourite is definitely the Fabled Quest Chronicles, with its curious pantheon of the Titan's Trail Caravan, of which The Forest of Ancients is an impressive tome of 415 wonderful pages, which more than matches The Lord of the Rings and The Lion, The Witch and The Wardrobe sagas, both of which have been celebrated in film and (in the latter's case), on national television too, which in my humble opinion, The Fabled Quest Chronicles should be too.
The epic fourth part of the series, (not to be the last, you'll be thrilled to hear) tells the long and ultra-populated (thankfully there's a comprehensive glossary at the back), story of the Titan's Trail Caravan's progress through the eponymous, indescribably vast Forest, where, led as ever by the magical, allegedly human - though I have my doubts - known only as Traveler or Mr Traveler and his shape-shifter 'dog-with-no-name', (who variously appears at a second's notice and/or necessity, as a horse, a griffin, a flying snake or by other creatures of Mr Dragon's vastly inventive imagination, for any purpose his master requires).
As afficionados like myself know well, others among the huge caravan include Princess/Lady Aylwen, her companion Maiden Gwynedd, King Aelreth, Mr Hobbs, Mr Estus,young Mr Quillen the artist and fairy 'minder' to twin sisters and their Quest, to reach the Kingdom of Atlantea, a mystical far, far away land, like the Atlantis of legend.

New friends and allies, plus enemies old and new, including the re-animated evil Four Kings, appear in various combinations to help or otherwise, in a magnificent epic saga that will make you gasp at times with awe, wonder or fear and absorb you into completely forgetting all about the Covid-19 pandemic and your Lockdown Blues, while you thrill and chill like never before, at an amazing, fantasy adventure, The Forest of Ancients, by Austin Dragon, the like of which you'll be satiated by - until the next time.

Grab a copy today - it's a (2)5-star superstory, that will totally grasp your imagination and keep you in its spell!
Read more
Helpful
Comment Report abuse
See all reviews from the United States

Kay Smillie
5.0 out of 5 stars Wonderful Tension-Building Storytelling
Reviewed in the United Kingdom on May 5, 2020
Verified Purchase
This is a fabulous continuation in the Fabled Quest Chronicles. Book Four, and the writing still has the same high quality of storytelling, and the alternation between pace of the steady trek of the journey itself and the tension of the mental and physical attacks.

Titan's Caravan rumbles through to the Great Forest, and, oh boy, Mr Quillen's pen has a life of its own and his Glossary gets larger with each step. No wonder, when all manner of life are huge in stature. If you think Traveler and his friends had a bad journey in the previous books, then you should ready yourself for all the new beastie monstrosities, and the shock of the comforting familiar becoming terrifying deadly.

The reader finds out a little more about some of the characters and, when you do, it feels like you have been given a choice jewel, to be hidden away from sight until it needs to be used for the benefit of all. The author likes to give us these like a dripping tap, a little drop here, a little drip there. This happens particularly when it comes to Traveler himself. He's a wonderfully known-but-unknown quantity, but what he does know and imparts to us is quality information. The others, I believe, would follow him to the ends of the earth, as he oozes confidence and standing (whether he actually feels it inside or not), and shows his leadership qualities when he has all the different races, types, sizes, and enemies, working as a team. I love watching his relationships with the other characters grow mile by mile. He's a fantastic kaleidoscope of a character. I wonder how he came across all this knowledge and became the Traveler we all know and love? I can't wait to read the prequel 'Quest Master' to find out.

prefdavid
4.0 out of 5 stars Another excellent story from Austin
Reviewed in the United Kingdom on May 16, 2020
Verified Purchase
Once again Austin takes us into his world of Traveller and his Caravan and moves tehm and us towards their eventual destination despite all the barriers that they have to overcome.

I generally like how Austin develops his stories and want to whether all the characters we're rooting for will be successful in their quest so why isn't this a 5 star review.

Well there are two issues I had with this book that prevented that. The first should be simple to correct as someone did not proof read it properly. There were two sections where a few pages were duplicated and these duplicated pages need removing as it did cause a little disruption to the storyline as I first though I wa experiencing a deja vu moment.

The second issue is at times it feels like there is just too much repetition, I really don't need to read again and again of the different groups of characters being lined up when the Caravan is about to move off, when often this makes no contribution to the storyline. It just feels like this is padding out the story to fill the page target.

Anyway that's my two minor gripes and neither will stop me looking forward to Book five.
Read more
One person found this helpful
Helpful
Sending feedback...
Thank you for your feedback.
Sorry, we failed to record your vote. Please try again
Report abuse

Kindle Customer
5.0 out of 5 stars Epic Journey and read
Reviewed in the United Kingdom on May 6, 2020
Verified Purchase
Austin does it again as book 4 takes us to our fantastical lands and perhaps one of the most dangerous parts of the journey as we enter the vast forest full of all manner of beast/ plant and otherwordly creatures. An excellent piece of writing and a brilliant mix of adventure mystery and action to keep the reader caught up in this realistic rendition of fantasy.
Read more
One person found this helpful
Helpful
Sending feedback...
Thank you for your feedback.
Sorry, we failed to record your vote. Please try again
Report abuse