You've subscribed to Forge of Eternity! We will preorder your items within 24 hours of when they become available. When new books are released, we'll charge your default payment method for the lowest price available during the pre-order period.
Update your device or payment method, cancel individual pre-orders or your subscription at
Your Memberships & Subscriptions
There was an error. We were unable to process your subscription due to an error. Please refresh and try again. 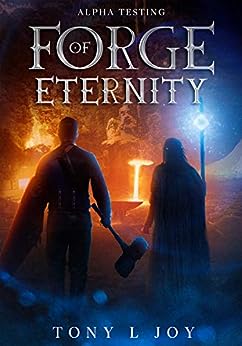 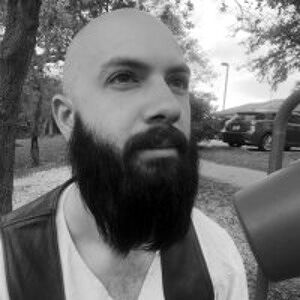 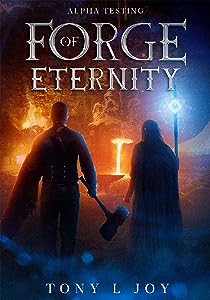 Robert sander
5.0 out of 5 stars Great take on NPC interactions
Reviewed in the United States on April 14, 2021
I still haven't finished this novel yet. I love the real-world feel of the game world. When the player is injected into the game, he is immediately thrust into a world that is already in motion. NPCs give out fake quests and other players working for dark factions try to trick the players and lure them to their doom. The new game feeling was very relevant when they struggle to survive their strange environment.

There is an apothecary that was modeled after a 7-11 which made me feel l like I knew exactly what the MC was walking into. When dealing with NPCs the layers were not just handed quests. They had to deal with grumpy, surly, and even just overworked NPCs. It was fun to watch them interact with each character they met. This is a game I would play. This is a book I will finish. Real-life just got in the way.

The only reason I didn't give it a full 5/5 was that some of the battles were long and detailed. My mind wanders in those areas. If you are a battle buff, this book is perfect for you.

Poor Richard
4.0 out of 5 stars Good LitRPG Kickoff
Reviewed in the United States on April 16, 2021
This book is told from two Point of Views (POVs). That's not my favorite type of novel, but it works pretty well. The male protagonist, Deacon, grew on me as the novel progresses. He starts out as stereotypical snowflake who complains a bit too much and is a bit clueless. However, then he allows a copy of his mind to be permanently uploaded to a MMORPG and the rest of novel covers the upload's story. This made for a fun tale, but also raises some real ethical issues that will hopefully be addressed in future novels. In this novel, uploaded player characters have no rights and are threatened with permanent death if they don't achieve certain objectives. Not a pleasant concept if you buy the author's premise that the uploads have all the feelings and memories of the original.

Amalie, the female protagonist, is a bit manipulative, but has a sense of humor and is overall a nice addition to the tale (unlike an annoying female sidekick that joins the party later and was one of the few characters I disliked). Amalie has some insider connections to one of the major factions (guilds) in this game and that greatly impacts the overall plot. There seemed to be a lot of faction activity and player activity for an alpha test, but that just seems weird, it doesn't really hurt the story.

The overall story is good and the book has a satisfactory stopping point. My only other concern is that I noticed the author has another short story out in this universe, but it is currently only available if you purchase it. I will read the second book in this series if it available in Kindle Unlimited. However, I didn't enjoy the book enough to buy the sequel.
Read more
2 people found this helpful
Helpful
Report abuse

Joshua Navarro
5.0 out of 5 stars A well-written and thought out story from an up-and-coming author.
Reviewed in the United States on May 7, 2021
I picked up this book after running across a short story by the author set in the same world and I am glad that I did! The game world was fleshed out pretty well, your standard fantasy setting, with an in-game justification for how the game company was consolidating things inside the world. I like when things are explained instead of being waved away, and the author manages this without getting into infodump territory. The mechanics of the game meshed with the story and the characters didn’t go crazy OP or allocate their stats all over the place like idiots.

All the characters in the book had distinct personalities, and I liked that it switched between two of the characters to give different perspectives, even if they weren’t separated often. Some chapters would step back and show part of a fight or an encounter from the other main character’s point of view, which worked pretty well and didn’t hurt the pacing. On that note, the fight scenes were pretty detailed but didn’t overstay their welcome and made good use of the characters’ abilities.

The plot itself was fun, ramping up from intro quest to high stakes, and the author seems to be setting up for base building or dungeon core elements in future books. I’ll be following this series, I’m interested to see where the author takes things next.
Read more
One person found this helpful
Helpful
Report abuse

WeldingTurtle
5.0 out of 5 stars Wow!
Reviewed in the United States on April 22, 2021
I didn't know what to expect coming into this book, having never heard of the author before. I was pleasantly surprised by how good the book was! There were a few small issues of seemingly interchanged with others that messed up a few sentences, which made me have to stop and reread them. This was the only minor issue I had, and I am definitely looking forward to the next book.
Read more
2 people found this helpful
Helpful
Report abuse

melee
5.0 out of 5 stars This is Peak Gamer World Building
Reviewed in the United States on April 28, 2021
Okay Look....if ya are wondering "Should I, a Gamer/RPG type of nerd-person give this story a shot of worming into my brain and being the thing I think about cause now I kinda wanna 'run' in this world?" Lemme give the real...for Really Real™ answer.
Here it is.

I know this cause I did...and I'm excited for more of it.
Read more
One person found this helpful
Helpful
Report abuse

cheeseheadguyAW
1.0 out of 5 stars Confusing multiple simultaneous POVs
Reviewed in the United States on April 28, 2021
I had high hopes for this book, but it got really confusing and I couldn't keep reading it due to the constant switching between different character points of view especially with the characters being together and not having separate adventures.
Read more
Helpful
Report abuse
See all reviews