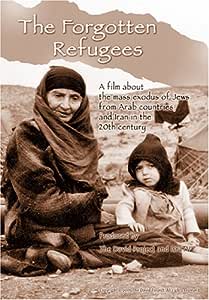 Michael Grynszpan (Director) Format: DVD
2.9 out of 5 stars 15 ratings
Available at a lower price from other sellers that may not offer free Prime shipping.

The Forgotten Refugees: A documentary about the mass exodus of Jews from Arab countries and Iran in the 20th century.

The Forgotten Refugees explores the history and destruction of Middle Eastern and North African Jewish communities, some of which had existed for over 2,500 years. Employing extensive testimony of survivors from Egypt, Yemen, Libya, Iraq and Iran, the film recounts the stories  of joy and of suffering  that nearly a million individuals have carried with them for so long.

Segments on the contributions of Middle Eastern Jews to politics, business and music, testify to the enormously rich cultures which fleeing Jews left behind. The film weaves personal stories with dramatic archival footage of rescue missions, historic images of exodus and resettlement, and analysis by contemporary scholars, to tell the story of how and why the Arab worlds Jewish population declined from one million in 1945 to several thousand today.

The film features interviews with Moshe Katsav, Israel's current President, as well as a number of other individuals who were instrumental in the rescue and resettlement of Mizrahi Jews.

2.9 out of 5 stars
2.9 out of 5
15 customer ratings
How does Amazon calculate star ratings?
Amazon calculates a product’s star ratings based on a machine learned model instead of a raw data average. The model takes into account factors including the age of a rating, whether the ratings are from verified purchasers, and factors that establish reviewer trustworthiness.
Top Reviews

voracious reader
4.0 out of 5 stars The Story of the Recent Expulsion of Jews from Arab Lands
Reviewed in the United States on June 17, 2013
Verified Purchase
Everyone frets about the poor 3rd world refugees including the Palestineans. However, when those refugees were Jewish the world turned a blind eye. Only Israel opened her doors to them. Before Saddam Bagdad was 40% Jewish. Jews lived and worked in Egypt, Iran, Syria, Yemen, Morroco and other Muslim lands. They were often prosperous and more well educated than the average citizen in these countries. Besides being successful merchants , they were also doctors, lawyers, accountants, and teachers. However, in the 1960's as Israel won wars perpetrated against it, the security of the Jews in each of these countries was threatened. They had to leave their property, businesses, practices and many belongings to emigrate to Israel quickly. In Israel they lived in tent cities and were cared for by the Israeli government. Newly impoverished this population had to learn Hebrew and retrain for jobs that might be available in Israel. Not one country other than little Israel offered to help. She gave sanctuary to hundreds of thousands of middle eastern Jews. Only other Jews donated money to help Israel absorb them. During this time there were over 100 U.N. resolutions dealing with protections for refugees. Not one of them applied to Jewish refugees. This story needed to be told. I thought the cinematic techniques and filming could have been better. This is not a polished BBC production. For that reason I downgraded this to a 4 star review. However, I found the story mesmerizing. For the story of just one of these merchants read The Man in the Sharkskin Suit.
Read more
3 people found this helpful
Helpful
Comment Report abuse

J. Rodriguez
5.0 out of 5 stars The plight of the Mizrachi Jews
Reviewed in the United States on June 29, 2006
Verified Purchase
The Forgotten Refugees is a very good documentary on the plight of the Mizrachi Jews living in Arab countries and also Iran. Here are the testimonies of the many who fled. In their own words they vividly describe what happened, the horrors they went through. There is also very good footage and photos of the Mizrachi Jews living in Arab lands, and refugee camps. Imagine this, the Jewish people had just gone through the holocaust, the mass murder of 6 million Jews, now another 900,000 had to flee their homes during the 1940 and 1950s. They left everything behind, their homes, vineyards, business, and friends. Up to the 1940s 40 per cent of the population in Baghdad, Iraq was Jewish, they had been living there for 2,600 years, long before the rise of Islam and Christianity, and now they were force to leave. It was that, or get killed. Colonial rule in Arab countries fomented the rise of Arab nationalism during the 1920s, 30, and 40s which in turn lead to discriminatory laws, and hatred towards the Jewish populations, Jews again became the scapegoats. Mobs gathered to kill Jews, synagogues were burt to the ground, Jewish property was confiscated, and their citizenship taken away.

Grand Mufti Hai Amin al-Husseni of Palestine met with Hitler and they developed a plan to set up concentration camps in Arab countries. With the help of Hitler Husseni went on national Nazi radio and broadcast in Arab countries crying "rise as one man and fight for your sacread right, kill Jews where ever you see them". Their only outlet was to flee. Hundreds of thousands lived in refugee camps until Israel was able to take them in. During their testimonies they also point out that there were many wonderful Arab neighbors that treated them justly and help them escape. This documentary sheds light on the forgotten refugees.

Klink
4.0 out of 5 stars Record of what has been lost
Reviewed in the United States on December 27, 2019
Verified Purchase
Very informational
Read more
Helpful
Comment Report abuse

H. Eisenberg
5.0 out of 5 stars Important story that needs to be told
Reviewed in the United States on February 19, 2007
Verified Purchase
The Forgotten Refugees tells an important story about the now virtually vanished Jews of Arab countries. Most people don't seem to realize that there are both Arab and Jewish refugees in the Middle East and the plight of the Jewish refugees has been forgotten. This video tells the story in a way that makes you understand what a vibrant Jewish community had existed, the persecution to which this community was subjected, and how this community is now gone, due to hatred of the Arab communities for their Jewish neighbors and for no other reason. The only things that I can criticize about the video is that it was supposed to discuss the Jews of Arab lands and of Iran and there was little or nothing about Iran. Also, the video does not illustrate the conditions in Morocco for the Jews where conditions were better for the Jews than in other Arab lands.

I highly recommend this video to anyone who is interested in obtaining a clear and objective view of the long-standing troubles between Arab and Jew in the Middle East.
Read more
9 people found this helpful
Helpful
Comment Report abuse

Low Hertz
5.0 out of 5 stars Helps fill in a missing part of history
Reviewed in the United States on March 27, 2009
Verified Purchase
Few know that Jews lived throughout Northern Africa and the Middle East
from before the time of Islam. For example, 40% of Baghdad was Jewish.
Jews lived, generally in harmony throughout the Moslem world during
the Middle Ages, with some exceptions.

What changed after Hitler put the Mufti on his payroll?

It helps get the big picture of the complex situation and is very
interesting.
Read more
4 people found this helpful
Helpful
Comment Report abuse

MBSLondon
5.0 out of 5 stars An important insight into the Middle East
Reviewed in the United States on January 9, 2007
Verified Purchase
This movie offers a different perspective on the Middle East. By showing how the Jews were treated by their Arab neighbours, it makes a strong case for Zionism and Israel, which is now home to almost 80% of Mizrahi Jews who previously lived in Arab countries and Iran. It also shows the diversity and beauty of Sephardi culture, which has been destroyed by an extreme form of pan-Arab nationalism and antisemitism.
Read more
10 people found this helpful
Helpful
Comment Report abuse

pthhh
4.0 out of 5 stars Excellent documentary
Reviewed in the United States on November 26, 2013
Verified Purchase
This was a wonderful film but a bit narrow in the numbers and variety of people interviewed. The subject is one that is too little visited in film and books.
Read more
Helpful
Comment Report abuse

brooksie
5.0 out of 5 stars Little known history: A must see!
Reviewed in the United States on January 1, 2013
Verified Purchase
I ordered this on a recommendation from a friend. The impact of this true historical account was incredible. The suffering of the Jews throughout thousands of years of history is a must see for everyone- Jew or not.
Read more
2 people found this helpful
Helpful
Comment Report abuse
See all reviews from the United States