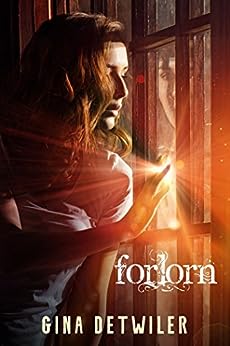 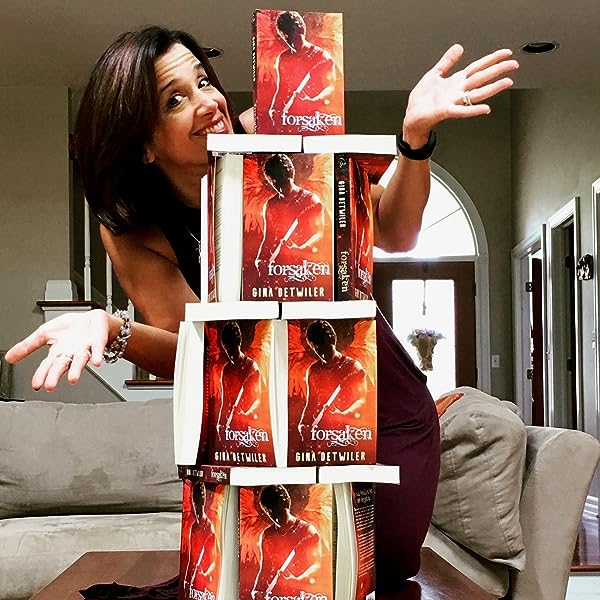 From KIDSBOOKBUZZ section of San Francisco Book Review "This book combines friendship, romance, and music with a biblical reality of angels and demons in a thrilling read. The novel follows Grace Fortune and her friends as they survive a school shooting and their first experience of demons and become involved with the mysterious Jared Lorn. As the band of friends comes together, both figuratively and musically, they quest to destroy the demon Azazel, Jared's father. Although this bears all the hallmarks of yet another supernatural romance, I should point out the book's magic is in its seamless interweaving of Christian mythology.  Even through its gritty and realistic portrayal of everything from loss to fame, from addiction to the complexities of family life, the book maintains an exciting pace and remains accessible. My only problem with the plot is the cliff-hanger seen at the end; I need a sequel!" review written by Lucy, age 16

Gina Detwiler is the co-author with Priscilla Shirer of the bestselling kids' fantasy series The Prince Warriors. She lives in Buffalo, New York.

4.3 out of 5 stars
4.3 out of 5
56 global ratings
How are ratings calculated?
To calculate the overall star rating and percentage breakdown by star, we don’t use a simple average. Instead, our system considers things like how recent a review is and if the reviewer bought the item on Amazon. It also analyzes reviews to verify trustworthiness.
Top reviews

John H. Manhold
3.0 out of 5 stars 5* Fascinating fantasy for many; -2* for reasons described.
Reviewed in the United States on July 21, 2019
Verified Purchase
Forlorn, a dark story of suspense ISBN: 9781978440180 Vinspire Publishing, an e-book copyright 2017 and written by Gina Detwiler.
A prologue describes the situation that results in Grace Fortune being pulled by her Guardian Angel when she is 6 years old from the flaming wreck of her family’s automobile that consumes her parents. The story begins as Grace, now sixteen and being raised by her aunt and uncle, is a student at the Buffalo Arts Academy, where although suffering from a degree of Attention Deficit Disorder, possesses a lovely voice and ability to play the piano. With her are her somewhat misfit friends that include scientifically inclined and quite pragmatic Ethan Ellerman who is there on full scholarship as a designer of video games, artistically inclined Brianna (Bree) Reynolds who at the moment points out a newcomer to the school who is every girl’s dream man, Jared Lorn with muscular build, almost white hair and strikingly blue penetrating eyes and his seeming attraction to Grace. Ethan points out that Jaren is a felon and was transferred here because he had stabbed another student with a fork at a different school. He heard that he moved from “Ohio or Oregon, something with an O anyway”. However he was said to play the guitar amazingly well. Only shortly thereafter Derick Holder, the boy with whom Jared had fought appeared at the lunch room and opened fire with an automatic weapon. Ethan is struck in the stomach and falls into Grace’s lap bleeding profusely. She calls out “Derick! Please stop! Stop shooting.” Her guardian cries out to Grace to sing a special song which he sings to her in the night when she has bad dreams from the Dark Ones seeking a way in. Her singing causes Derrick to hesitate and suddenly Jared moves as a blurred figure knocking the gun from his hand and literally throwing him against a large plate glass window with sufficient force to shatter the glass killing Derick. From this moment the tale becomes one of war between forces of good and evil including different levels of both with guardians, archangels, appearance of ‘the Risen One”, demons, fallen angels, the Nephilim, the importance of faith and the power of prayer per se and through music.
Discussion: The author has presented a most unusual fantasy that may well appeal to readers, especially YA who enjoy conflicts between good and evil forces as they vie for dominance in the living world. The trials and tribulations of the two protagonists are suspenseful as they engage in a series of activities that take them on remarkable journeys. Regrettably, from this reader’s perspective, the tale contains numerous hiccups that are difficult to accept and therefore may require a SPOILER ALERT. If, however a reader enjoys unusual suspenseful fantasy stories pitting the forces of good versus those of the ethereal dark side, obtain the book, enjoy and do NOT read further.
Two of the most difficult discrepancies for this reader to reconcile are: Much is made of the fact that Grace’s parents were completely destroyed by the fiery crash. Yet her mother suddenly appears with an entirely different scenario? Neither Grace nor her friends know much about Jared and seemingly nothing about Derrick yet Grace speaks to him by name and is uncertain when he left school before returning to massacre the students?
Conclusion: A fascinating fantasy that should be of particular interest to younger readers and most especially to those of religious inclination. Regrettably and although having enjoyed many tales in the fantasy genre, this reviewer apologetically cannot reconcile the plot discrepancies mentioned.
Read more
One person found this helpful
Helpful
Report abuse

Winston J. Phillips
4.0 out of 5 stars ultimately... the fight between Good and Evil
Reviewed in the United States on September 25, 2019
Verified Purchase
Initially, this book Forlorn by Gina Detwiler seemed to be one of teenage relationships, school experiences, and teen choices in a group with different dispositions, but who like each other and try to stick together. Grace, the main female protagonist, stands out. The prologue tells of Grace being saved at six by an angel in a car accident that killed her parents; the angel is dedicated to protecting her. Grace is drawn toward Jared, who is also an introvert with a school reputation of being angry and dangerous. A shooting incident at school reveals that Grace has power in her singing, while Jared’s strong physical powers underlies more about him. The group – Grace, Jared, Bree, and Ethan form a musical band which features much in the adventure.
The guardian angel watches over Grace and seeks to keep her from the notice of people who wish to kill her. Uncle Ralph, with whom Jared lives thinks Jared is in a similar position because of his own history. Jared ‘s history is rooted in the conflict between angels - those who fight for God and Good; and those who had fallen to earth. Jared is a progeny of one of the Fallen and is part Nephilim and part human.
Jared’s father is Azazel who is bound imprisoned in “the Abyss”. Grace embraces the idea that the way to free Jared from the curse of the Nephilim is for him to kill his father. This draws the attention of both Guardian and Fallen Angels, the latter to do harm to Jared and Grace.
The story then opens out broadly into the conflict between the Guardian Angels and the Fallen Angels. Following Grace’s suggestions, and with each member of the team protected by a guardian angel, the team travels to the Abyss to kill Azazel. They are joined by Penny, an addict. The fight for Grace and Jared is on.
There is much danger in Grace meeting her birthmother, Shannon, a cinema star, deeply Dark but pretending to be of the Light. There is danger too in Jared engaging his father in the Abyss, and the group returning to Uncle Ralph’s mansion without Jared.
The story seems a perfect fit for game movies and the interest of YA. Group dynamics evolve into the conflict between Good and Bad, As an adult, I find the author’s handling of the Guardians/Watchers controversy interesting; new to me is any detail on the whole story of the Fallen Angels and their conflict with those still ascendant - the relations between ascendant angels and their roles; their submission to the Risen One and his roles, etc. I noted that in most cases Fallen Ones are not directly involved - they use minions, some demonic, but also humans seduced into the Dark. We have been reminded elsewhere that we are in this world with a free will to choose between Good and Evil.
I like the story but with some reservations: the book is long and although the reading is easy, the first-person narration did make reading somewhat clumsy; I expected more density in the duel with Azazel. This contact has too much of the immediacy of an x-box game.
I had difficulty figuring out this paragraph about Penny’s “sort of adopted, named Jamel”: “He was from Jamaica or some Caribbean place like that. He was quiet, and I wasn’t even sure he could speak English. Penny said he was really good at playing the steel drum, and she wanted him to join Forlorn.” I found this a very sloppy paragraph. All Caribbean places (like that -Jamaica) have an official name; , 99.5% of the people speak English; and if you from a place ‘like Jamaica or something like that and can play steel drums well, there is a strong probability that you are from Trinidad. Such sloppiness in a book that generally avoided this trait is disconcerting.
Read more
Helpful
Report abuse

Katy
3.0 out of 5 stars Interesting concept that could be explored more
Reviewed in the United States on January 24, 2020
Verified Purchase
I enjoyed the concept of this story. Angels and demons have been done plenty of times, but this book really dives into Christian mythology and pulls from deeper elements. It’s enough to make it stand out and be intriguing. I like how music is woven into the story as well; I’m always a fan of magic that’s tied to music.

My biggest complaint about this book is the pacing. Much of the story feels rushed. Many events are glossed over with few details, or characters make instantaneous decisions. For example, in Grace’s first real conversation with Jared, she instantly declares that they must kill Azazel. Shannon came out of nowhere as well, and Grace’s time with her was over much too quickly. I honestly think that period could fill most of a novel on its own, with more exploration of fame, alcohol, and their effects on a young girl, all while angels and demons fight in the background. This pacing also means that we miss out on a lot of characterization. Most of the characters are simply background cast made up of one or two cliché features. The book also has a lot of formatting and grammar issues, which might bother some people (me included).

I think this book can be a fun, quick read, but the plot holes and pacing might be too much for some people. There’s still an interesting concept here, and it’s honestly pretty wholesome and sweet for what might be considered a “paranormal romance.” It would be nice to see this fleshed out more, with more details, emotions, and characterization, but it serves well as a fluffy and fun book.
Read more
Helpful
Report abuse
See all reviews