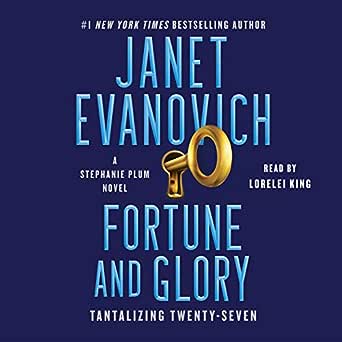 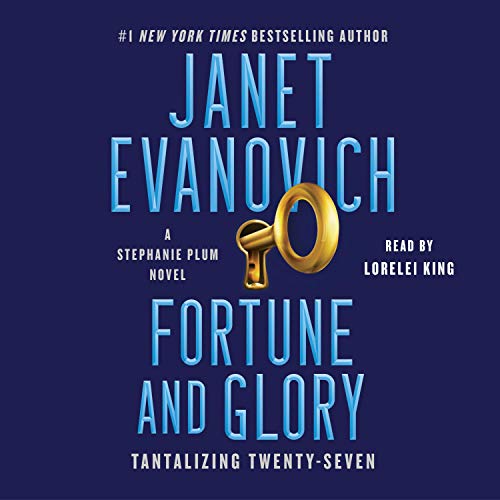 Fortune and Glory: A Novel

4.6 out of 5 stars
4.6 out of 5
9,807 global ratings
How are ratings calculated?
To calculate the overall star rating and percentage breakdown by star, we don’t use a simple average. Instead, our system considers things like how recent a review is and if the reviewer bought the item on Amazon. It also analyzes reviews to verify trustworthiness.

MOMof3
1.0 out of 5 stars End It!
Reviewed in the United States on November 4, 2020
Verified Purchase
I LOVED this series! Laughed, cried, got others hooked on it and stayed up to the wee hours reading them. However, I truly believe these books have ran their course and have definitely run out of steam. I quit reading them and so did everyone else that I got hooked on them. Reading the description I was hoping we were finally going to work toward a final book. No such luck. Same old, same old nothing new, no humor. Janet it’s time to write the final book and end the series.
Read more
126 people found this helpful
Helpful
Report abuse

Renee M
1.0 out of 5 stars I couldn’t be more disappointed...
Reviewed in the United States on November 3, 2020
Verified Purchase
I am usually such a fan of these books. So much so that I stayed up until midnight for the release and read it straight through. I was sooo disappointed. I don’t want to give too much away and spoil it for others, but I think the cover blurb raised my expectations and then the book failed to deliver. To the point that I feel the cover was pretty deceptive and it made me a little angry when I was done reading the book. The characters where flat...some even seemed to take a step back as far as development. The relationship triangle was flat (there was no where near the conflict or resolution hinted to on the cover). I’ve never been annoyed by “the triangle” as other readers have been in the past, but I was with this book for some reason. The plot was pretty flat. Even the new character, Gabriela, was such a miss. I definitely won’t be picking up her stand alone series.

This might be the end of the line for me and Stephanie Plum. It’s time to give up on these, which makes me sad. I’ve loved them for so long. Sometimes, you have to move on.

linda galella
TOP 50 REVIEWERVINE VOICE
4.0 out of 5 stars The finale of a great series is a romp and a half!
Reviewed in the United States on November 3, 2020
Verified Purchase
Stephanie, Lula, her two love interests, (Ranger & Morelli), a new character named Gabriela Rose, Grandma Mazur and an host of others, are fully focused on finding the treasure left behind by Grandma’s recently deceased husband. In typical fashion, they bungle and eat their way thru the non-stop action with lots of guffaws and head shaking along the way.

Not so typical, at least of the last few books, there’s real action, mystery and adventure in this book. The story is still largely driven by dialogue but there are car chases and destruction scenes that will rival “Fast & Furious” and make classic car enthusiasts groan.

The sense of determination and finality in this volume is evident from the early chapters. While I found it a welcome addition, I did miss some of the ethnic “charm” or tropes that usually pepper author, Janet Evanovich’s writing. Trenton, NJ is in my backyard , the Italianisms ARE my yard and these have provided much of the joy from the Stephanie Plum series.

Gabriela Rose is a great foil in this story. She’s everything Stephanie is not, including the lead in Evanovich’s next novel: her heritage is Hispanic, she’s designer thru ‘n thru plus she’s a soldier-of-fortune that can cook; no take out cartons for this chica!

All the loose ends of Stephanie’s life are finally tied up. There’s no real “satisfaction” chapters which left me with the feeling we might see these characters again sometime. Still, the ending is typical Plum and will give a smile to fans both old and new as well as hope for what might yet return another day.

Shannon
1.0 out of 5 stars Not worth the time
Reviewed in the United States on November 5, 2020
Verified Purchase
Like most readers, I have been a big fan of this series since the beginning. Yes, the books have fallen into the never ending cycle of repetition and lack of development but I stick with it because for those hours it takes me to read, I'm entertained. Nothing changes but the pacing is good and it keeps me turning the pages. But this book was painful to read. Painful. Like a 300 page newspaper article. Flat is the only word I can think of to describe it. I felt like I was reading an outline that never got developed. The characters had no spark or energy - like even they were bored and just dialing it in. And forget about a triangle/romance. Ranger and Morrelli have very little "screen" time.
Read more
59 people found this helpful
Helpful
Report abuse

Kim greeley
3.0 out of 5 stars Stephanie Plum
Reviewed in the United States on November 5, 2020
Verified Purchase
While I enjoy the characters that are introduced, the plots are getting thin, and the Ranger-Morelli , who gets the girl, is the same in every book. It really needs to end and the only way to do that is have Ranger get the girl so that the series can continue with some spice. There are more ways to go with the series at that point. The way it is now, well let’s just say- you are left flat at the end.
Read more
56 people found this helpful
Helpful
Report abuse

Recca Scott-Fox
3.0 out of 5 stars Disappointed ...
Reviewed in the United States on November 5, 2020
Verified Purchase
I know this series focuses on the Stephanie being a bond enforcer with FTAs and one of the sub-plots being the focus of the Ranger/Joe triangle. However, I was really hoping after the "jacket write-up" about Stephanie getting some competition related to the men in her life and her making some choices, we would finally see some hope in the whole triangle. Not so much. First, Stephanie's competition is not described as a mini-Ranger as the jacket originally said, nor does she make any revelations about her relationship with Ranger other than they get each other; there is some around Joe, however, it's about jealousy. And seriously, what man fist bumps his competition when 10 pages prior, Joe asked Stephanie "do you really want to talk about dinner partners?"

While I get the book is not about getting into the deep and emotional weeds, I was expecting a lot more and just disappointed $15 went to what? Lulu getting her hair shot through like a cartoon?

I have always been Team Ranger, but it would be nice to see them move it to the next level and see if it goes beyond the physical.
Read more
22 people found this helpful
Helpful
Report abuse

Dosha
5.0 out of 5 stars I liked it!
Reviewed in the United States on November 3, 2020
Verified Purchase
I am a loyal Evanovich reader. Some books are better than others , but this one was a winner. Loved that Ranger starred in this one . So glad to feel goosebumps for Morelli too!! Potts was fun also. Great writing , Janet. This was a treat.
Read more
21 people found this helpful
Helpful
Report abuse
See all reviews

Janmo
3.0 out of 5 stars Disappointed
Reviewed in the United Kingdom on November 25, 2020
Verified Purchase
Disappointed. Price is increasing without similar value in the book content. This was really part B of the 26 book. It’s getting too much of the same. No resolution to the Morelli/Ranger situation. She needs to find an end to this now.
Read more
One person found this helpful
Report abuse

Hannah20
5.0 out of 5 stars wow
Reviewed in the United Kingdom on November 9, 2020
Verified Purchase
omg i couldnt stop reading once i started (started reading at 00:30 finished at 5:00am) this was action packed to the max. i know that some say these books have become samey but that is totally wrong, this was one amazing ride. a deffo must read and we have all our favourite characters included plus a few new ones. enjoy
Read more
Report abuse

Lee3UK
5.0 out of 5 stars Pure Plum Chaos
Reviewed in the United Kingdom on November 22, 2020
Verified Purchase
Another classic Stephanie Plum adventure. If you've read the previous 26 books it's much of the same. Comedic, chaotic and fun. A nice easy afternoon read. It won't change your life but it's a lovely little bit of escapism that should put a smile on your face - and who couldn't use a smile these days?
Read more
Report abuse

Bluebell Hill
4.0 out of 5 stars Stephanie Plum never disappoints
Reviewed in the United Kingdom on January 10, 2021
Verified Purchase
Always enjoy Evanovich and the latest Stephanie Plum didn't disappoint. A nice, fast-paced funny escape although I do feel like they are getting shorter every time. I could read these for hours if I could. Perfect with tea and cake. Have a look. I really must check out her other series.
Read more
Report abuse

Mrs S.M
4.0 out of 5 stars Ranger is back!
Reviewed in the United Kingdom on November 14, 2020
Verified Purchase
I feel like I've waited forever for the next book in the Stephanie Plum series and I wasn't disappointed.

With each page does Stephanie catch the criminals or get killed by them.

Witty, exciting and addictive, will the treasure be found. Read on to find out!
Read more
Report abuse
See all reviews