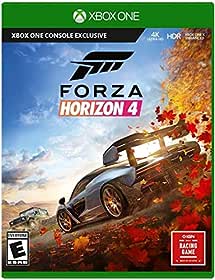 4 CHANGES EVERYTHING. Dynamic seasons change everything at the world’s greatest automotive festival. Go it alone or team up with others to explore beautiful and historic Britain in a shared open world. Collect, modify and drive over 450 cars. Race, stunt, create and explore – choose your own path to become a Horizon Superstar.

Discover lakes, valleys, castles and breathtaking scenery in stunning HDR and native 4K on Xbox One X and Windows 10. This is Britain like you’ve never seen it.

Master driving in dry, wet, muddy, snowy and icy conditions in a shared world where everyone experiences changes in time of day, weather, and seasons together.

Collect, Modify and Drive over 450 cars.

Enjoy the largest and most diverse Horizon car roster yet, including over 100 licensed manufacturers.

In the new open-ended campaign, everything you do progresses your game. Choose your path to become a Horizon Superstar.

Go it Alone or Team Up.

Play solo or cooperatively. Join Team multiplayer for casual fun or Ranked Teams to take on the best in the world.

4.7 out of 5 stars
4.7 out of 5
2,188 global ratings
How are ratings calculated?
To calculate the overall star rating and percentage breakdown by star, we don’t use a simple average. Instead, our system considers things like how recent a review is and if the reviewer bought the item on Amazon. It also analyzes reviews to verify trustworthiness.

Apathetic
3.0 out of 5 stars Good, but monetization attemps galore
Reviewed in the United States on October 9, 2018
Platform: Xbox OneEdition: StandardVerified Purchase
First as abracer the driving itself is pretty amazing. I find myself playing for hours at at time. However, as you play more and more you can see that in typical Microsoft fashion, they are secretly pushing you to pay for the cars in the game with more of your real money if you want specific cars. At first, you'll play and everything is fine, you'll think man I can buy some pretty cool cars if I win just ten races and upgrade them by winning maybe 10 to 20 more races.

However the games top tier cars, the ones a lot of people want like the top end Lamborghini's, the Koenigsegg's, Bugatti's, etc cost north of 2mm a car. It'll take you all game to be able to afford those cars. Yes, you may win some extra cash with wheelspins, but this is really where the game falls flat. Most of the time, north of 80% of the time, you're winning pointless things that have nothing to do with the game and will have zero impact on your experience like emotes, yoga pants, or simply dreadful cars. Other times you may win 2000 credits, but that's few and far in between. Even more few and far in between is the winning of more than 50k. Maybe you can just sell the cars, nope. You have auction off cars to other players of the game (who don't want a Ford focus), so you're basically stuck with a garage full of garbage cars with no value. So it's painfully clear that if you want a K 1 to 1 and Chiron, you'll need to buy the car pack, which I think is 3 bucks for one or 30 bucks for like 40 or something. There are also, only a handful of meaningful races where you can win more than the 7 to 15k you'd typically win. Even that's only like 25K. There is nothing like Gran Turismo of old where you can win hundreds of thousands for some races, a super cool car (like an Indy car). Most of the coolest stuff you'll get will be through random luck on the horizon wheel spins, or you spending extra real dollars to get the coolest cars, like the ones everyone you're racing has and the ones in the advertisements. Yes, you can buy certain Ferraris, Lambos, Porsches, etc, but not the top end ones. I personally settled on a 2012 Aventador (the 2016 version seems locked behind team racing scenarios) that was good enough to get me through all of the street type races. The rub is that I wanted the centenario or something like that, which I think is 2.3 or 2.8MM. I wanted other cars, but no way in the world am I paying Microsoft again for the game, when that is clearly their motivation.

Tyler
5.0 out of 5 stars Top driving game possible out to date
Reviewed in the United States on October 5, 2018
Platform: Xbox OneEdition: StandardVerified Purchase
Forza Horizon 4 is possibly the best driving game out. Is it a racing game, not really, if you're looking for racing games, go to the Forza motorsports series of games, if you're looking for driving games, the Horizon series is where its at. So far my only complaint really and the game's downfall fall for me at least, is all the stupid dance moves and clothes you win to dress your avatar in the game, its pretty pointless. 9 times out of 10, you'll win pointless clothes or something else to add to your avatar. I want CR points and cars, not clothes to outfit my avatar.
Read more
37 people found this helpful
Helpful
Comment Report abuse

HenDog
5.0 out of 5 stars Forza Horizon 4
Reviewed in the United States on October 2, 2018
Platform: Xbox OneEdition: StandardVerified Purchase
Forza was the main reason I bought a XBOX in early 2018. After I got it I bought every Forza game that was out for the system! Forza Horizon 3 came with my XBOX and I really liked that game! The graphics in Forza Horizon 4 have improved the game will deff be one of the best ones of 2018! Deff recommend getting!
Read more
16 people found this helpful
Helpful
Comment Report abuse

Huey
4.0 out of 5 stars Fun game but get old after 8 seasons
Reviewed in the United States on December 11, 2018
Platform: Xbox OneEdition: StandardVerified Purchase
Pros: Graphics are phenomenal and the environment is very detailed. The game soundtrack has a lots of variety, though I wish I could mute all the music to play my own music through soundcloud. The car selection and modifications are just as intuitive as Forza Motorsport.

Cons: After getting through the 1st tutorial seasons there's not much more to the game that what you already unlocked. After that it's a grind of trying to beat more and more races. The physics of the game are less realistic than forza motorsport 7, which makes sense for this game which is more arcade style. I wish there was the option to be able to adjust the car handling physics to where it was more like FM7.

Unfortunately I won't be playing this game year long until the next Forza comes out. Instead FM7 will be seeing time when I need to get my racing/drift fix. Sure it's an improvement from the other Horizon games, but the replay factor scores low for me.

Kubricat
5.0 out of 5 stars Best Driving Game on the Market
Reviewed in the United States on December 24, 2018
Platform: Xbox OneEdition: StandardVerified Purchase
Just like the title, this is a driving game not a pure racing game. What does this mean? You will spend additional minutes driving from one race to the next however this does add to your currency to buy new cars etc... I agree that getting clothes for your avatar is pointless. Bummed I haven't figured out how to also load this on my PC as I did with Horizon 3. Ultrawide with headphones gives you a great sense of speed and butterflies in the stomach. I will never get another Gotham Racing but I have finally warmed up to this series and give kudos to the developers for making a well polished game...which is probably the EX Bizarre Creations people. :)
Read more
8 people found this helpful
Helpful
Comment Report abuse
See all reviews