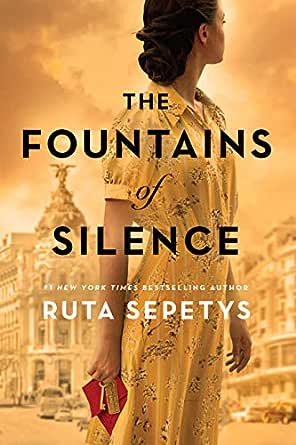 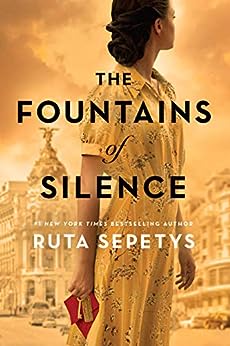 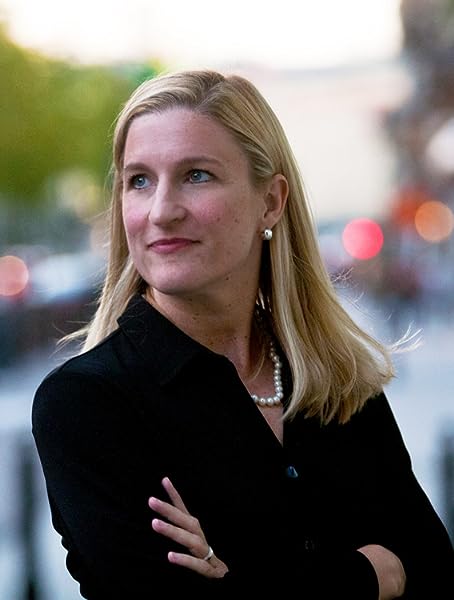 The Fountains of Silence Kindle Edition

Praise for The Fountains of Silence:

"Spain under Francisco Franco is as dystopian a setting as Margaret Atwood’s Gilead in Ruta Sepetys’s suspenseful, romantic and timely new work of historical fiction . . . Like [Shakespeare's family romances], 'The Fountains of Silence' speaks truth to power, persuading future rulers to avoid repeating the crimes of the past." --The New York Times Book Review

“Full of twists and revelations…an excellent story, and timely, too.” --The Wall Street Journal

* "[Sepetys] tells a moving story made even more powerful by its placement in a lesser-known historical moment. Captivating, deft, and illuminating historical fiction." --Booklist, *STARRED REVIEW*

* "This richly woven historical fiction . . . will keep young adults as well as adults interested from the first page to the last." --SLC, *STARRED REVIEW*

* "[A] far-reaching narrative . . . As usual Sepetys has done her homework [and] brings a brutal authenticity." --BCCB, *STARRED REVIEW*

* "In a gut-wrenching YA novel about the terrible destructiveness of secrets untold, master storyteller Ruta Sepetys reveals the dark underbelly of 1950s Spain under dictator Franco." --Shelf Awareness, *STARRED REVIEW*

"Readers who enjoy historical fiction will find that Sepetys has once again brought history to life." --VOYA

Praise for Salt to the Sea:

"Ruta Sepetys is a master of historical fiction. In Salt to the Sea the hard truths of her herculean research are tempered with effortless, intimate storytelling, as her warm and human characters breathe new life into one of the world's most terrible and neglected tragedies." —Elizabeth Wein, New York Times bestselling author of Printz Award Honor Book Code Name Verity

* "Sepetys excels in shining light on lost chapters of history, and this visceral novel proves a memorable testament to strength and resilience in the face of war and cruelty." —Publishers Weekly, starred review

* "This haunting gem of a novel begs to be remembered, and in turn, it tries to remember the thousands of real people its fictional characters represent. What it asks of us is that their memories, and their stories, not be abandoned to the sea." —Booklist, starred review

Ruta Sepetys (www.rutasepetys.com) is an internationally acclaimed, #1 New York Times bestselling author of historical fiction published in over sixty countries and forty languages. Sepetys is considered a "crossover" novelist, as her books are read by both teens and adults worldwide. Her novels Between Shades of Gray, Out of the Easy, and Salt to the Sea have won or been shortlisted for more than forty book prizes, and are included on more than sixty state award lists. Between Shades of Gray was adapted into the film Ashes in the Snow, and her other novels are currently in development for TV and film. Winner of the Carnegie Medal, Ruta is passionate about the power of history and literature to foster global awareness and connectivity. She has presented to NATO, to the European Parliament, in the United States Capitol, and at embassies worldwide. Ruta was born and raised in Michigan and now lives with her family in Nashville, Tennessee. Follow her on Twitter @RutaSepetys and Instagram @RutaSepetysAuthor.
See all Editorial Reviews

4.6 out of 5 stars
4.6 out of 5
235 customer ratings
How does Amazon calculate star ratings?
Amazon calculates a product’s star ratings based on a machine learned model instead of a raw data average. The model takes into account factors including the age of a rating, whether the ratings are from verified purchasers, and factors that establish reviewer trustworthiness.

Michele
5.0 out of 5 stars Secrets in Spain
Reviewed in the United States on October 1, 2019
Format: HardcoverVerified Purchase
I thoroughly enjoyed Between Shades of Grey and Salt to the Sea. In fact they are two of the novels I most often recommend, so I had high expectations for the latest book by Ruta Sepetys. I'm happy to say it met them.

Like those other two books, this one sheds a light on a hidden part of history, but it does so more gradually.

Like in Salt to the Sea, there were multiple narrators. I felt they were all necessary for the telling of this story, and I liked them all, though initially I found one less sympathetic than the others.

I enjoyed this and have already recommended it. I'm thankful for the early read from BookishFirst, and I liked it so much that I've purchased the hardback.

C Orr
5.0 out of 5 stars Excellent read
Reviewed in the United States on December 31, 2019
Format: Kindle EditionVerified Purchase
After reading Salt to the Sea awhile back, and just finishing Out of the Easy, I eagerly began reading The Fountains of Silence. This story is told from multiple perspectives, like Salt to the Sea, and maybe for that reason, it took awhile to really get going. About halfway through the book, though, I couldn’t put it down. Historical fiction may be my new favorite genre, and I loved learning about Spain during Franco’s rule, post-civil war. Part mystery of sorts, part love story, set against the backdrop of 1950s Spain, this novel is a must-read.
Read more
3 people found this helpful
Helpful
Comment Report abuse

Randy
4.0 out of 5 stars Good historical fiction read
Reviewed in the United States on November 18, 2019
Format: Kindle EditionVerified Purchase
I liked The Fountains of Silence by Ruta Sepetys. This is the third book I have read by R Sepetys. My favorite book of her is Salt to the Sea.

R Sepetys does a great job of researching, writing and developing the plot and characters. The story didn't grab me like her others books did. I didn't like the ending - I didn't feel like the story was wrapped up. I felt like the book just ended, I was expecting more.

I would recommend The Fountains of Silence by R Sepetys to readers who like: historical fiction, stories about Spain and Franco.

Christina Hansen
5.0 out of 5 stars binge-read it
Reviewed in the United States on November 2, 2019
Format: HardcoverVerified Purchase
Binge-read this book in one weekend. I love anything that explores the Spanish Civil War era. This book was so well-written. I can't wait to read more from this author.
Read more
4 people found this helpful
Helpful
Comment Report abuse

BETH ARNOLD
5.0 out of 5 stars Wonder juxtaposition of fiction and history
Reviewed in the United States on December 14, 2019
Format: HardcoverVerified Purchase
This was a very readable novel. The writing was wonderful. At the end of each chapter was a bite of history—part of a speech or article written during that historical period. It was just enough to give the reader a sense of what was happening in Spain at the time the novel took place. The characters were well developed and believable.
Read more
One person found this helpful
Helpful
Comment Report abuse

barbara choon
4.0 out of 5 stars Review
Reviewed in the United States on December 8, 2019
Format: Kindle EditionVerified Purchase
Just coming g home from a visit to Spain helped to keep me involved. When visiting other countries, I have always had some idea about that country, but Spain seemed to keep their secrets hidden. I knew nothing about Spain except Queen Isabella and king Ferdinand. Spain has an interesting history, one that I would like to explore more of.
Read more
One person found this helpful
Helpful
Comment Report abuse

TriedItReviewedIt
5.0 out of 5 stars Informative and Engaging
Reviewed in the United States on January 2, 2020
Format: HardcoverVerified Purchase
Loved this book! Even though it’s geared to YA readers, it is written for adults of all ages. I learned a lot about the history of Spain through the author’s extensive research, intriguing characters and vivid descriptions of the era. I look forward to visiting Spain very soon!
Read more
One person found this helpful
Helpful
Comment Report abuse

Carol Perreault
4.0 out of 5 stars Life in Spain under Franco
Reviewed in the United States on October 23, 2019
Format: HardcoverVerified Purchase
Really good story set in Spain during the 1950s reign of Franco. A young man arrives with his parents and stay at a nice hotel where the young man meets a maid. They form a friendship of sorts while he takes pictures. He is drawn into the lives of those he meets and questions all. Maybe too much?
Read more
Helpful
Comment Report abuse
See all reviews from the United States

Bronwen
5.0 out of 5 stars Ignited an interest in Spanish history
Reviewed in the United Kingdom on November 29, 2019
Verified Purchase
Aside from being a very poignant love story - this book has ignited my curiosity to find out much more about the hidden history of Spain during and in the aftermath of the Civil War. I will be reading plenty of Hemingway and other history books in the coming months.
Read more
Helpful
Sending feedback...
Thank you for your feedback.
Sorry, we failed to record your vote. Please try again
Report abuse