You've subscribed to Rules Undying! We will preorder your items within 24 hours of when they become available. When new books are released, we'll charge your default payment method for the lowest price available during the pre-order period.
Update your device or payment method, cancel individual pre-orders or your subscription at
Your Memberships & Subscriptions
There was an error. We were unable to process your subscription due to an error. Please refresh and try again. 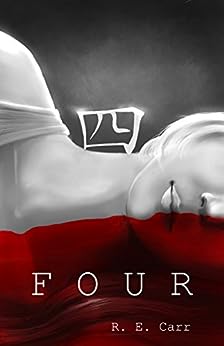 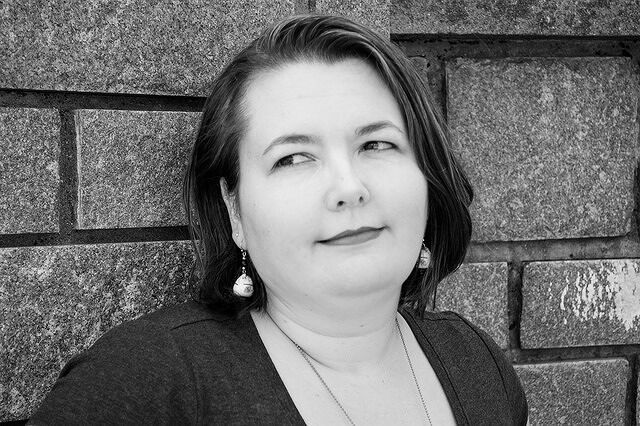 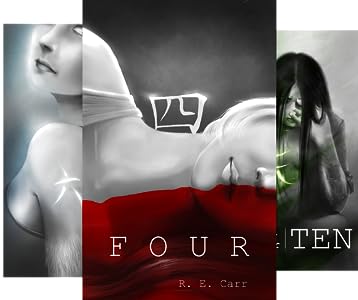 ***A 2015 Kindle Scout Selection.***
"The writing throughout was clever, witty, and the dialogue sparkled (even though the vampires didn't)." -IndieHeart

"The science and history of the vampires was creative and fascinating, and the ending was totally unpredictable. I loved it!" - T. J. Zalecki, author of Rising Tide (SIRENS, Book 1)

"Rich in texture and characterization, Four was a different kind of read for me. My best description of the story? Sookie Stackhouse meets Stephanie Plum." -Maggie Toussaint aka Rigel Carson for Muddy Rose Reviews

"Four goes beyond quirky characters, romantic escapades and witty dialogue, to establish a fascinating take on the nature of what a vampire actually is, their long history, and their various views on humanity." - Rick Gualtieri, Author of the Bill the Vampire Series

"R. E. Carr takes us through an interesting tale of urban horror and moral ambiguity that may leave you questioning what you yourself would do in that situation." -Tyler J. Dean

Just to let you know, the follow-ups to Four are out now. Six is the second story in the Rules Undying series, and as of November, 2016 you can check out Ten as well...

R. E. Carr likes to split her time between the alien (well, resident alien) she married, her two adorable offspring and the vast army of characters who constantly argue in her brain. She uses her past life as a video game reviewer to remind herself just how awesome it is to be writing novels now. Rachel writes because she knows so many people and places that never quite made it into this version of the universe. It's her duty to let them out. Writing also gives her mind a certain peace and calm rarely felt in this multi-tasking, wired world. --This text refers to the paperback edition.
Read more

3.8 out of 5 stars
3.8 out of 5
243 global ratings
How are ratings calculated?
To calculate the overall star rating and percentage breakdown by star, we don’t use a simple average. Instead, our system considers things like how recent a review is and if the reviewer bought the item on Amazon. It also analyzes reviews to verify trustworthiness.
Top reviews

J. Souza
5.0 out of 5 stars FOUR Rewrites Vampire Mythology in Riveting Fashion!
Reviewed in the United States on May 31, 2016
Verified Purchase
This entire novel is essentially a job nterview and told in flashback. Georgia is trying to convince a woman named Gail to take over her job caring for an aging, decrepit vampire named Geoffrey. He's fang-less and addicted to nineties soap operas, but it pays great.Why is she doing this? And why is she leaving?

Thus begins R. E. Carr's vampire mythology novel. In it we learn all about vampires and the various families spread out over the globe. Carr creates her own worldview, and with her own rules governing vampire behavior. It's a place where vampires find themselves allergic to wood and sunshine. Of course every vampire is different. Some sicken after eating vegetables. Some even like garlic. But blood is their mainstay, and not necessarily human blood, although human blood is the tastiest. Geoffrey, it seems, enjoys a fresh rat smoothie.

I really enjoyed the characters, especially Geoffrey, the old, infirm vampire that Georgia agrees to take care of. He's maudling and kind and pathetic, too,and quite a sympathetic character, seeing how he's on the decline. He and Georgia have great chemistry together. Then there's Minerva, the brilliant sexpot. Stephen, the younger vampire with a secret who falls for Georgia. And Ren, the subservient Japanese caretaker (and financial wizard) who has his own skeletons, and whose fate is set in stone.

Carr has rewritten the fictional rules for vampires in an entertaining and ingenuous way. Four challenges the genre and breathes new life into vampire mythology. She references historical facts and blends them seamlessly into modern pop culture. What vampire doesn't like Eighties new wave? I really enjoyed FOUR, having read SIX first. It's a book I highly recommend!!

The author's version of vampires add to the lore in fun, and sometimes gross, ways. *grin*

Not a romance as most define a romance. There are paranormal characters in it, and there are romantic elements to the story, but this is not a paranormal romance. I'd give the reasons why, but I can't without spoilers.

I'm not fond of the way this story was written. The narrative kept bouncing between recent past and the present under the guise of two women talking with one telling the other what happened. It ripped me out of the story each time. It would have been a much better story, more compelling, if the story had been allowed to progress as events happened without the back and forth.

The story idea is a good one, but the execution fell short. I struggled with this rating because the story did keep me interested in what would happen next, and I like some of the characters, but it was hard to finish because of the way it was written and all the headhopping.

I was provided a copy of this book through the Kindle Scout program.

Tony
5.0 out of 5 stars Thank you for an original take on vampires!
Reviewed in the United States on September 6, 2016
Verified Purchase
Vampires are not sexy, gorgeous, seductive beasts? A vampire book that doesn't jump into romance by page 10? Sign me up!

Four starts as Gail, former health care assistant to the Mob, is interviewed by Georgia to become her replacement as personal assistant to an ancient vampire. Then Georgia tells her what it is like. Is he a sexy vampire? He is a smelly, unhygenic, antisocial, dumpy, poor impulse control manchild grandpa. And quickly warms your heart. But a romantic interest? Eww.... Thankfully Carr avoids that idea. Instead she tackles the idea of what it really would be like to have that job. Carr tackles the tropes of vampire fiction, and gives them fresh spins and justifications for why they are. The book shows it's inspiration from the RPG Vampire, but never feels derivative, and builds a new mythos. The vampires come off as truly alien in their own way, and should never be assumed to truly have "humanity."

I did feel that the story within the story had gone on for WAY too long, and I wanted to see Gail do more than be a character in a bar reacting to the story told, or interactions while Georgia takes a call. Then I had a sneaking suspicion and thought of a movie..... and loved that even though I guessed why the tale told took up so much of the book, it took things up to 11.

I did respect that while there WAS a romance, it didn't really rear it's head until halfway through, and never took over the plot. And as in all GOOD vampire fiction, things never end truly happy, but in this case was bittersweet. The best possible ending.
Read more
One person found this helpful
Helpful
Report abuse
See all reviews

K. Sumner
5.0 out of 5 stars Not what I expected but in a good way
Reviewed in the United Kingdom on September 9, 2020
Verified Purchase
I really loved this story. Absolutely not what I expected for a vampire book but pleasantly surprised by all the twists and turns that took place. Kept me guessing throughout. And a good smattering of humour too boot. A really enjoyable read.
Read more
Report abuse

MikeJH
5.0 out of 5 stars Enjoyable read
Reviewed in the United Kingdom on April 7, 2018
Verified Purchase
This book drew me in from the begining really enjoyed the way the stories from Georgia were put out and how her life changed due to one mistake looking forward to getting stuck into the rest of the series
Read more
Report abuse

lisa w
3.0 out of 5 stars Started well then fizzled out
Reviewed in the United Kingdom on March 3, 2016
Verified Purchase
Really good book right up to just before the end. The last chapter seems to fizzle out and go off on another tangent . The last line is not explained. I finished feeling disappointed
Read more
Report abuse

T.N
4.0 out of 5 stars Interview with the vampire's assistant
Reviewed in Australia on February 9, 2020
Verified Purchase
My first thoughts about this book is that it was interesting. The author goes for a different take on an old monster, giving them her own spin.
First off though. This book does not contain any violence or vampire killing in it. Instead the horror element lies in how much power and influence these creatures have in our world and the threat that they could be. Don't buy the book thinking that it is going to be non-stop action, this is more drama and world building focused. Some sex, some tragedy, and there are a few romance elements.

I think that general audiences will appreciate this book more than myself. It has a bit of everything and it is well-written.

Plot:
Georgia is telling her replacement what her life was like being a vampire's assistant.

Characters:
Georgia is the main character of the story. At the start she is calm collected, and it appears as if she isn't against using illegal channels to get what she wants. However, we quickly learn that this is a Georgia that has become desensitised to the evils of the vampire world. A year ago, she was a mess.

Jeffrey Pendragon. This is Georgia's boss. Jeffrey is a pathetic specimen of a vampire and I award the author for not going the traditional beautiful troubled vampire route. Jeffrey is not sexy and is often childish.

Ren: He can be explained as the butler. Born to serve the vampire race, he has learned the hard way to not disappoint his masters. His and Georgia's interactions make up most of the drama in the book. I feel that there is a lot of sexual tension between the two.

Steve: Steve is one of the main characters but I am unable to get into his backstory without spoiling the book. The only thing that I can say is that he is a vampire and his history is pretty tragic.

My thoughts on the book:
I have a very complicated relationship with this book. I find it interesting. The author has given the vampire clans some thought. It's not a traditional romance story and there is some cool lore here.
A number of times I was listening to the audiobook and thinking, “Georgia. Oh, honey. No.”
I do think that most audiences will enjoy it.

Narrator:
Alejandra Reynoso does a fantastic job expressing her characters' emotions and you can feel the frustration and shock in her tone. To me she is Georgia.
Read more
Report abuse
See all reviews