The Four Voyages of Christopher Columbus: Being His Own Log-Book, Letters and Dispatches with Connecting Narratives.. (Classics Book 217) New Ed Edition, Kindle Edition 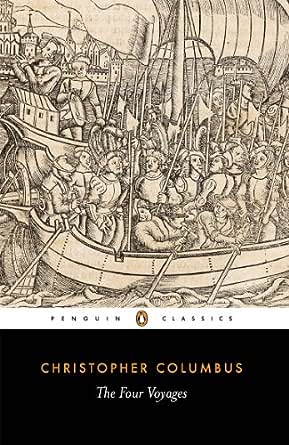 Flip to back Flip to front
Audible Sample Playing... Paused   You are listening to a sample of the Audible narration for this Kindle book.
Learn more
ISBN-13: 978-0140442175
ISBN-10: 0140442170
Why is ISBN important?
ISBN
This bar-code number lets you verify that you're getting exactly the right version or edition of a book. The 13-digit and 10-digit formats both work.

Christopher Columbus is the man who discovered America and was known as the Admiral of the Ocean in his day. Italian-born Columbus went on four voyages which led to the discovery of many places hitherto undiscovered. --This text refers to an out of print or unavailable edition of this title.

4.5 out of 5 stars
4.5 out of 5
184 global ratings
How are ratings calculated?
To calculate the overall star rating and percentage breakdown by star, we don’t use a simple average. Instead, our system considers things like how recent a review is and if the reviewer bought the item on Amazon. It also analyzes reviews to verify trustworthiness.
Top reviews

krebsman
VINE VOICE
5.0 out of 5 stars Every American should know this book
Reviewed in the United States on July 27, 2014
Verified Purchase
Under the current “shame narrative” of American history, Columbus has been recast as a villain. I would urge the world’s readers to become acquainted with this book for a more objective view of him. When we see him within the context of his time, he becomes, for me at least, a very sympathetic figure. This excellent book tells the story of Columbus’s four voyages to the Caribbean taken from contemporary paraphrases of his log books (the originals have been lost), his son’s biography of him, accounts by contemporary historians, and letters by Columbus and others. This material has been skillfully cobbled together into chronological order by J.M. Cohen to make a quite compelling reading experience. Columbus went farther than any European had ever gone before. He was expecting to find India and he truly believed that Japan was not too far away. His perceptions of the New World were greatly colored by his expectations. Because of the high-risk nature of his enterprise, the men who served as his crew were adventurers, mostly of low moral character, who were treacherous, greedy, and cruel. Trying to govern such a mob in that particular environment must have been a nightmare for him. Indeed, it appears that he had a nervous breakdown at the end of the second voyage. Columbus was disgraced and discredited by the end of his life. I consider this story a tragedy.
Cohen’s translation is outstanding. I found it very easy reading, and a real page-turner, to boot. Five Stars.

Jack Hathaway
1.0 out of 5 stars Terrible Book!
Reviewed in the United States on March 10, 2021
Verified Purchase
I bought this book recently, and was shocked at it's incorrect facts and misleading information. The author who was not a primary source, made up ideas of what may have happened in 1492. Here is the thing, I actually have copies of journals... not only of the Admiral Columbus, but also of a historian of the time who journaled what he saw ans experienced. There was also his son that wrote and documented the trip. These were all primary sources. There were folks back in Spain that knew of these people, and interviewed sailors and the leaders of the expedition. Those are primary sources. The Revisionist and incorrect author starts out going on about evil and things that did not happen, and things that he is guessing happened. No facts, no quotes from the primary sources that left dozens of journals, books, letters, etc. It was such a piece of garbage we tossed it into the fire place. I wouldn't even sell it for a quarter at a yard sale. If you want REAL history, there are better books out there like https://www.amazon.com/gp/product/0806123842/ref=ppx_yo_dt_b_asin_title_o01_s01?ie=UTF8&psc=1 Or https://www.amazon.com/Christopher-Columbus-Hero-Defending-Revisionism/dp/1548738123/ref=sr_1_1?dchild=1&keywords=the+hero+christopher+columbus&qid=1615445910&s=books&sr=1-1

I cannot remember if I have ever given a bad review before, but this book is not worth the read.
Read more
9 people found this helpful
Helpful
Report abuse

Busy Belle
5.0 out of 5 stars Confused about Columbus?
Reviewed in the United States on August 5, 2020
Verified Purchase
The best way to clear up confusion about Columbus is to read what was written by him and well as about him in his own time period. We tend to project our own concepts into the past. It's a little more work than being told what to think but it's also more satisfying to know you did the work needed to have an informed opinion.
Read more
10 people found this helpful
Helpful
Report abuse

L
5.0 out of 5 stars Fantastic
Reviewed in the United States on June 30, 2018
Verified Purchase
This is truly a masterpiece of editing. Cohen strings together bits from various contemporary accounts and Columbus's own journal in such a way that it feels like a really creatively written novel. Hugely entertaining and satisfying to read. (Obviously colonialism is bad blah blah blah. The editor would surely agree with that sentiment! In any case, this is a great book.)
Read more
20 people found this helpful
Helpful
Report abuse

Dallin Clark
5.0 out of 5 stars I read it to discover the character of Columbus, was not disappointed
Reviewed in the United States on December 15, 2019
Verified Purchase
lots of minute details which I skipped over. Learned a lot about Columbus. He was a great dude.
Read more
10 people found this helpful
Helpful
Report abuse

David Baca
3.0 out of 5 stars Fuson's Log
Reviewed in the United States on April 6, 2019
Verified Purchase
I thought the author's approach to update and annotate Colombus's Log was, in the main, quite helpful in understanding distances from island to island and harbour to harbour along with and their place names past and present. And his intriguing take on what island in the Bahamas Colombus first went ashore was persuasive even though the author is given short shrift by many, if not most, historians on where exactly Colombus first made landfall in the so-called New World
Read more
7 people found this helpful
Helpful
Report abuse

Luis Mansilla
5.0 out of 5 stars great description of Columbus voyages
Reviewed in the United States on November 1, 2005
Verified Purchase
This book is a great description of the events related to the exploration of the new world made by Columbus. The first two voyages are the most interesting because of the discovery of the caribbean island and the natives inhabitants living there, the arawaks and the caribs. The latter were very particular on account of its cannibalism.

In the third voyage, Columbus finally reach mainland and the fourth voyage was the toughest of all due to huge storms that lasted several days and the attacks of indian while they were repairing. At the end of the book there is an account made by Diego Mendez, a truly survivor and loyal servant of the Admiral who saved the lives of all of them while they were waiting in Jamaica, for a year.

I my opinion Columbus was a great navigator and a brave man. It is sad how the life of the Admiral ends and the poor retribution from the kings of Spain.
Read more
20 people found this helpful
Helpful
Report abuse
See all reviews

David I. Howells
4.0 out of 5 stars Discovering the new world.
Reviewed in the United Kingdom on November 15, 2007
Verified Purchase
This was a very good book overall that gave an absorbing narrative on the discovery of the Americas. Not a single trip odyssey as one would expect but a series of four voyages that resulted in the main in the discovery of Cuba, Hispaniola, Jamaica and mainland America.

The textual content of the book are direct lifts from documents, books and reports written by Columbus, his son and other historic authors. It is descriptive in nature and gives a great perspective on the wonderment of the sailors and of Columbus himself as they embark on their fascinating voyages of discovery.

There are new islands, tribes, cultures, animals, crops and diseases discovered aplenty. This along with political deceit, crew rebellions, native battles and the ever present peril of storm tossed seas gives a fascinating insight into this historical period. It is best described as a boys own story of unsurpassed adventure.

The fact that Columbus was not the true discoverer of mainland America is also explained by the main man himself...but read the book to find out this detail.

I personally would have liked more biographical and historical information on the main characters and events covered in the book. I was left asking myself a lot of unanswered questions by the end. I felt there was scant information given outside the boundaries of the 'lifted' narrative.

Overall though this was a very good book on a series of journeys that concluded with a new world being added to the old...fascinating reading!
Read more
7 people found this helpful
Report abuse

Amazon Customer
5.0 out of 5 stars Really, really interesting!
Reviewed in the United Kingdom on September 29, 2020
Verified Purchase
I was on the fence when it came to buying this. How interesting can a log book or journal be? FASCINATING! The way this book has been annotated for context and detail really helps and it’s genuinely exciting and interesting to read. If you’re on the fence, do it! Great book!
Read more
One person found this helpful
Report abuse

Rusty
5.0 out of 5 stars A mind boggling piece of history
Reviewed in the United Kingdom on March 16, 2010
Verified Purchase
How can anyone not be interested in these momentous times and the events which unfolded?

This is a mind boggling book, no fiction can come close to the records of those days and the changes in mentality which sprang from them.

Oh, and the bravery of the men...incredible.

Not the easiest of reading but worth the effort.
Read more
2 people found this helpful
Report abuse