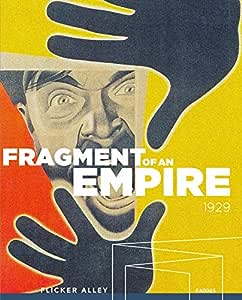 Fragment of an Empire [Blu-ray]

If influence is the criterion for determining the significance of a film director, writes Russian film scholar Denise J. Youngblood, then Fridrikh Ermler is perhaps the most important director in Soviet film history. Why he does not join the ranks of Eisenstein, Kuleshov, and Vertov as one of the great masters of Soviet filmmaking is unknown. Yet his legacy as an intricate craftsman of deceptively simple stories layered with psychological depth and technical proficiency lives on in his work.


Fragment of an Empire was Ermler s last silent feature and last of four productively contentious collaborations with the method actor Fiodor Nikitin. To prepare for his part as Filimonov a soldier suffering from total amnesia due to shell shock from the Great War Nikitin apparently disguised himself as a doctor s assistant in the Forel Psychiatric Clinic, where he studied actual amnesia patients. Ermler, meanwhile, may have drew upon his own first-hand knowledge of war as a former spy of the tsarist army to create a profoundly realistic and moving portrait of a man whose memories begin to awaken in concert with the radical transformation of the Bolshevik Revolution of October 1917.


Based primarily on a 35mm nitrate print held at EYE Filmmuseum in Amsterdam, this restoration of Fragment of an Empire was supplemented with a 35mm nitrate print from the Cinémathèque Suisse, which provided the original Russian intertitles as well as a small number of shots missing from the primary source. Titles absent from the Swiss print were reproduced based on Russian censor records. A partnership between EYE Filmmuseum, Gosfilmofond of Russia, and the San Francisco Silent Film Festival, the restoration would not have possible without the perseverance and meticulous scholarship of archivist Peter Bagrov.


The film is accompanied by a choice of two musical scores: a brilliant new score composed and performed by Stephen Horne and Frank Bockius as well as an adaptation of Vladimir Deshovov s 1929 piano score, performed by Daan van den Hurk.


Restoring Fragment of an Empire - A demonstration by film historian and preservationist Robert Byrne on the film s restoration.
Narration Track - Commentary track featuring Russian film historian and curator Pater Bagrov and film restorer Robert Byrne on the collaborative efforts that went into preserving Fragment of an Empire.
A Masterpiece in Soviet Cinema - A new booklet essay on the historical importance of this film in Soviet Cinema.
Notes On the New Score - A short essay by composers Stephen Horne and Frank Bockius on their new score for Fragment of an Empire.
Adapting Vladimir Deshovov - A short essay by composer Daan van den Hurk on his recent adaptation of Vladimir Deshovov s 1929 original piano score.
Rare Image Gallery - A slide show presentation of vintage marketing materials, original poster artwork and more!

Chip Kaufmann
5.0 out of 5 stars Remarkable Russian Rediscovery.
Reviewed in the United States on August 4, 2019
Although I have been a silent movie fan since 1962 (when I was 10), it has only been since the turn of the 21st century and in particular the last 10 years that I have been able to witness the rediscovery and the restoration of many silent films once categorized as lost. Not only that but I am also becoming acquainted with movies as well as directors that I had never heard of before. Such is the case with FRAGMENT OF AN EMPIRE.

I once taught a course on Soviet era silent movies using Flicker Alley's 2011 LANDMARKS OF EARLY SOVIET FILM set which introduced me to movies I was familiar with but had never seen. This time around FA has provided me with a movie that I didn't know and a Soviet director, Fridrikh Ermler, who was completely new to me. FRAGMENT OF AN EMPIRE is a remarkable film that deserves to be seen by serious silent film enthusiasts.

On the surface the basic plot is a simple and familiar one. A World War I soldier is shell shocked and loses his memory for 10 years. When it returns he has to adjust not only to the missing 10 years (1917-27) but to the momentous changes that occurred during his amnesia. This includes the Russian Revolution which is where the film fits in with the Soviet propaganda of the day.

The soldier is the "fragment of an empire" who most now be reeducated and incorporated into Soviet society. At first this is very difficult for him but thanks to the marvels of the new Communist reforms, he adapts and becomes a model citizen and co-worker in a textile factory. He is eventually reunited with his wife who has since remarried to an abusive husband. Will she leave the husband and go with him? That's where the film ends.

Director Ermler conjures up a number of powerful images in the first part of the movie during the war scenes including one with a dog and a battlefield crucifix of Christ wearing a gas mask. He uses a number of cinematic techniques throughout including flashbacks and rapid montage editing to not only move the story along but make critical symbolic points about "out with old and in with the new".

No less than 9 different prints were viewed for this restoration with the two most important coming from The Netherlands and Switzerland. There are also 2 different soundtracks to choose from and a remarkable commentary which adds greatly to the viewing experience. Yet another quality collaborative effort from Eye Filmmuseum, The San Francisco Silent Film Festival, and Flicker Alley.